Gary Kent : ‘The Crisis in Iraq' 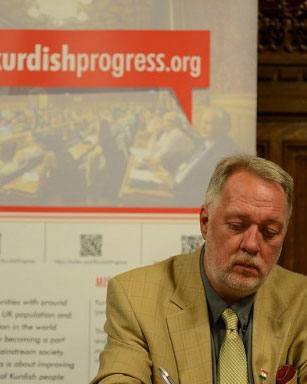 Administrator of the All Party Parliamentary Group for the Kurdistan Region, Iraq, Mr Gary Kent’s opening speech in the Public Forum ‘the Crisis in Iraq: Unexpected Alliances, Western Intervention and the Question of Kurdistan’.

“My name is Gary Kent, I am the director of the All-Party Parliamentary Group on the Kurdistan Region in Iraq, which is something of a mouthful.

I have been lucky enough to go to Kurdistan region several times. We have a very active group. It is clear that the security crisis facing the Kurdistan region is huge. The ISIS came very near to Arbil in August, but were rebuffed. While there should be no complacency about that, because this is a medieval, but very well organised and very well equipped organisation.

The thing that is not really part of the debate is the huge humanitarian crisis facing the Kurdistan region: Something like 1.4 million people or the equivalent of 17 million people in the UK have now been added to the population in the Kurdistan Region, many in the last few weeks, many with nothing, absolutely nothing but the clothes that they were standing up in. Making sure that that humanitarian crisis is uppermost in people’s minds. On a human level, as I think that it has got to be one of the biggest issues before us, that will require from friends of Kurdistan, from the Kurdish community, unity, discipline and determination over a long period of time. NATO says that ISIS will take 3 years maybe to be defeated.”