Special Event: Members of the International Delegation to Observe Trials of HDP Co-Chairs Demirtas and Yuksekdag Reports Back 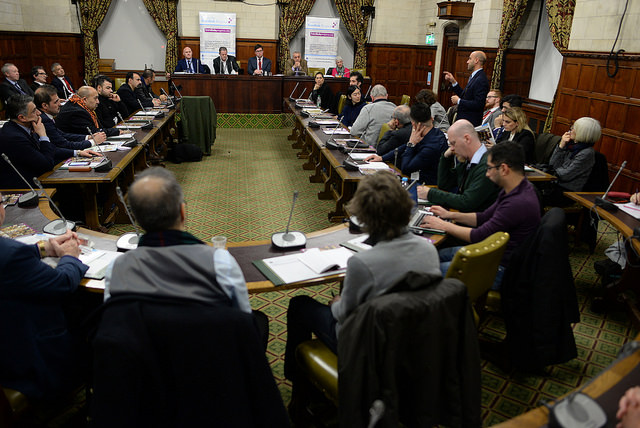 On the 30th of January 2018, in the Grand Committee Room of the House of Commons, the Centre for Kurdish progress held a public forum with members of an international delegation that traveled to Turkey to observed the trails of Peoples’ Democratic Party (HDP) Co-Chairs Selahattin Demirtas and Figen Yuksekdag on the 6th and 7th of December.

The event was kindly hosted by Dan Carden, Labour MP for Liverpool Walton.

Lord Glasman opened by saying that his experience in Turkey had shown him that the on-going state of emergency was not a period of time but a method of government. He remarked on the way the government was increasingly blending nationalism and religion for its own purposes. In contrast, he argued, the HDP offered a different vision for society based on grassroots democracy and respect for minorities. As did the new political developments in Rojava, he said, and it was important to show solidarity with those under attack in Afrin.

Lord Watts began by explaining that last time he went to Turkey with the Foreign Affairs Committee he was impressed and hopeful with the direction the country was going, however, this was in direct contrast to his recent experience as a member of the delegation, with ‘democracy and the rule of law seemingly disappearing very fast.’ He called on the British parliament and wider European community to pressure the Turkish government to be more transparent and, with this in mind, suggested the British embassy begin sending the ambassador to future trial hearings.

Giacomo Filibeck sought to remind the room that the HDP was a member of the Party of European Socialists (PES) and the arrests of their Co-Chairs should be treated as equivalent to German or British elected leaders being detained for speaking their minds against injustice. He further elaborated on similarities between the arrests and trails of HDP members and events in other European countries, saying that Hungary is now following a path similar to that of Erdogan’s. He warned that this is a danger which should not be naïve to and said that he and his party would continue to fight for the rule of law, democracy and Human rights across the continent.

Paul Maskey drew comparisons between the delegations experience in Turkey and his own in Northern Ireland. He began by describing the courthouse, which he said resembled a ‘heavily fortified prison’, and said that, despite the judge agreeing to allow the delegation into the court, they were prevented from doing so by the police. He then went on to describe how the police were constantly present with riot shields and water cannons, which he said shows the ‘fear factor’ that the Turkish state is attempting to use against opposition movements. One result of this, he argued, was a lack of media coverage as journalists run the risk of being arrested. He then spoke about the need to stand up to injustice no matter where it is and that he would continue to advocate for the HDP cause in Ireland.

Dennis McNulty further expanded on the experiences of the delegation in Turkey and what he described as the hostility they faced from the Turkish government. He gave the example of being asked to hand over their passports before being able to access the internet, as if they had arrived in a ‘police state.’ He also explained that he had tried to unfurl a GMB banner outside the court, but had quickly been stopped by the police. He then spoke of his concern about the labelling of everyone who opposes the government as a terrorist and how this is curtailing basic freedoms. He finished by saying that the British government should do more to stand up against the going oppression in Turkey.

Unmesh Desai echoed the comments of his fellow panellists, saying that he had been asked by people in Turkey to tell the world what was going in the country, but had essentially been blocked by the police from doing so, which told its own story.

Jennette Arnold spoke of Kurdish and Turkish people she works with in London who have said they are unable to return home due to the present government. She argued that the situation cannot be solved by the actions of brave people in the country alone, and that the Labour Party should take a stronger stance on the issues the delegation reported back upon.

Margaret Owen spoke passionately in favour of solidarity with the Kurdish people across the region, arguing that the situation in Turkey in particular was deteriorating after the electoral success of the HDP. She said that it was important, now more than ever, for the international community to take action and put real pressure on the Turkish government to release the HDP leaders and other activists currently detained.

Lord Glasman; is a labour member of the house of lords, a reader in political theory at London Metropolitan University and a visiting lecturer at Oxford and Queen Mary’s College London

Lord Watts; is a labour member of the house of lords and a committee member on the EU Home affairs sub-committee.

Giacomo Filibeck; is the Deputy Secretary General of the Party of European Socialists

Paul Maskey; is the Sinn Fein MP for Belfast West

Dennis McNulty; is the Branch Secretary for the GMB in London

Unmesh Desai; is a labour politician who represents city and east in the London assembly and a councillor for Newham London Borough

Jennette Arnold OBE; is the Chair of the London Assembly representing the constituency of Hackney, Islington and Waltham Forest