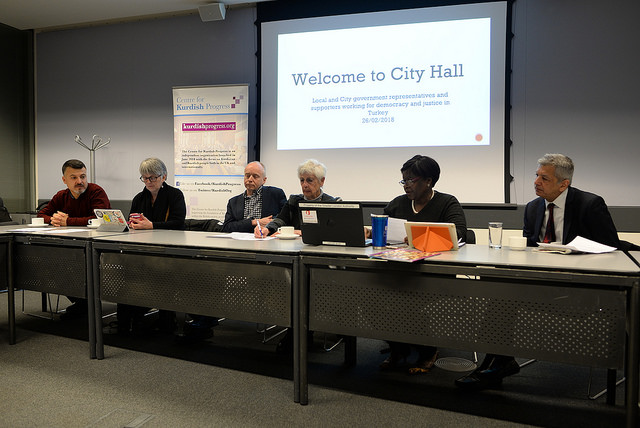 On the 26th of February, The Centre for Kurdish Progress together with the Peace in Kurdistan Campaign and the Defend Kurdish Mayors and Councillors Campaign held a meeting in City Hall with local and city representatives from across the UK to discuss efforts to support their counterparts in Turkey’s predominantly Kurdish regions, many of whom have been forcibly removed from their democratically elected positions.

The meeting was opened by Jeanette Arnold, member of the London Assembly for Hackney, Islington and Waltham Forest, who began by speaking of her experience as part of an international delegation to monitor the trials of Figen Yuksekdag and Selahattin Demirtaş, former leaders of the Democratic Peoples’ Party (HDP), who are being held in Turkey on terrorism charges. She then emphasised the importance of showing solidarity with HDP politicians at a local level and the need to highlight the activism taking place.

Unmesh Desai, London Assembly member for Barking & Dagenham, City of London, Newham and Tower Hamlets, reiterated Ms. Arnold’s remarks. Having also been part of the recent international delegation to Turkey, Mr. Unmesh said it was crucial to develop a local government network linked to the media, trade unions and other civil society groups, underlining that it was crucial to gain cross-party support.

Julie Ward, member of the European Parliament for North West England, spoke passionately about the need to recognise the gravity of the situation, saying it was comparable to Manchester town hall being raided by the police. She followed with a moving account of being twinned with and writing to a jailed politician, arguing that small acts of solidarity could make a big difference.

John Hunt, a journalist who has extensively covered the trial of deposed mayor of Diyarbakir Gultan Kisanak, gave a detailed account of the legal cases facing local politicians in Turkey and the importance of heeding their call for international solidarity. On this basis, he backed a network that could bring together important relevant actors and co-ordinate action.

Margaret Owen, a human rights lawyer with a long-standing interest in Kurdish issues, spoke emotively of the need for more solidarity, emphasising the common cause of oppressed peoples across the world.

Contributions from the panel members were followed by a wider discussion on how a solidarity network could be built and what practical steps need to be taken.