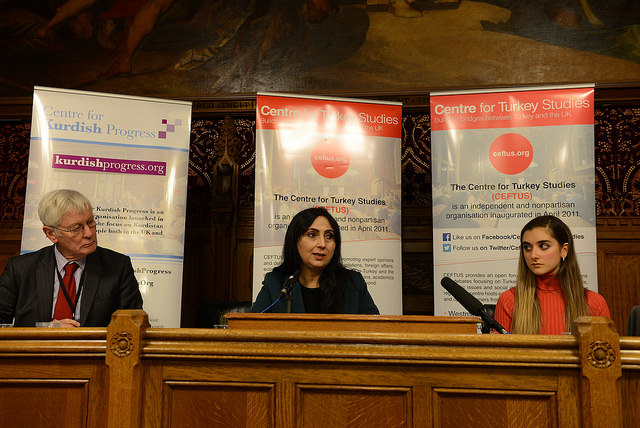 Our event in partnership with Refugee Workers Cultural Association (RWCA) and the Centre for Turkey Studies was chaired by Lord William Wallace and Joan Ryan MP for Enfield and was hosted Seema Malhotra MP in the House of Commons.

Mrs Figen Yuksekdag opened stating that she had come from an increasingly unstable Turkey with a heated atmosphere. She stated that Turkish President Recep Tayyip Erdogan had promised stability if his party were elected with a majority, but despite the AKP (Justice and Development Party) parliamentary majority, he has been unable to end the country's difficulties as promised. She continued, saying that Erdogan had stoked up tension in Turkey following the electoral results in June, and that he created an atmosphere of fear that encouraged people to back  AKP in November. She added that many felt obliged to vote AKP to provide the stability necessary to end the violence, but following the first of November this was not forthcoming, and that moreover the instability has increased, with a high number of civilian casualties during attacks and massacres in Ankara and the Kurdish region following curfews.

Mrs Yuksekdag stated that a government has been established and a cabinet has been sworn in, but that the rights that people have struggled for in Turkey have been taken away one by one. She stated that it is difficult to name the regime in Turkey, and that it was a republic but not a democratic one, as instead of democracy an increasingly authoritarian regime is in place.  She added that opponents to Erdogan still wish for democracy and change. She said that 6.5 million people had voted for the HDP (Peoples' Democratic Party) and that the many others who had voted for parties other than the AKP had demonstrated their opposition. She continued saying that the people made their wishes clear, stating that they did not want Erdogan, but he ignored this. Mrs Yuksekdag referred to this as a 'post-modern coup' which prevented a coalition being formed. She continued, that an AKP and CHP (Republican People's Party) coalition would have been possible and constructive for Turkey and would have had HDP support.

She went on to state that the HDP's election results in November were a great success given the difficulties faced by the party at this time. She continued that worst of all, the AKP's policies of violence and repression were maintained in spite of the electoral victory. She added that in so doing, the AKP has not acted like a victorious party, and has opted for these policies to enforce stability, instead of reaching out and attempting to create unity in the country. She also stated that these actions, alongside the murder of attorney and Kurdish rights activist Tahir Elci who was under state protection at the time of his death, show that the AKP has no interest in dialogue with moderate figures. She concluded that with its policies the government wants polarisation and not unity. She also accused the AKP of wanting to destroy the HDP's electoral successes and energy.

She added that despite the government's scaring some HDP supporters away from the polls, these supporters still believe in the party's struggle for democratisation. She called for the government to resume its peace talks with the PKK (Kurdistan Workers' Party) leader Abdullah Ocalan, and expressed that the HDP is trying to act as an opposition to government actions vis-a-vis Syria and the position of Syrian Kurdish forces such as the PYD (Democratic Union Party), and added that the HDP is advocating an alliance between the Turkish government and this movement. She stated that this was crucial for the Middle East, as Turkey is situated right in the midst of this crisis, and did not have the luxury of being able to look on from afar like Western countries.

She concluded stating her belief that a peaceful and democratic Middle East and Mesopotamia in which all peoples are recognised was possible, as the previous status quo of oil, the dollar and bloodshed had been overturned.

Her speech was followed by a question and answer session.

Figen Yüksekdag was born in Adana, Turkey, into an ethnically Turkish family. She is often assumed to be Kurdish or Alevi, however her family are Sunni Turks. She was an independent parliamentary candidate for the Adana electoral district in the 2002 general election. She was involved in women's rights movements for several years before becoming the editor of the Socialist Woman magazine. While serving on the board of the Atılım newspaper, she was taken into custody in 2009 due to her political activity. She cofounded the Socialist Party of the Oppressed (ESP) shortly after in 2010 and resigned as leader in 2014 to join the HDP, with which the ESP merged later the same year. During the second ordinary congress of the HDP, she was elected the co-chair of the HDP.