Recent Political Developments in Iraq and the Kurdistan Region: What role for the New Generation Movement? 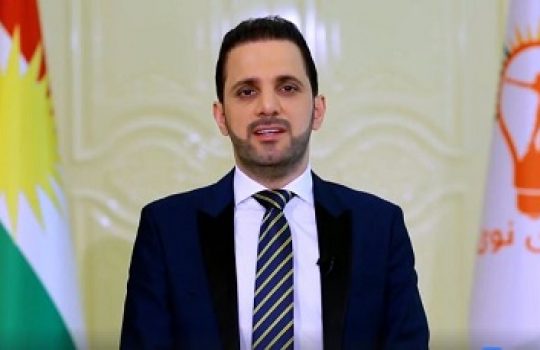 Join the Centre for Kurdish Progress for a discussion with President of the New Generation Movement Shaswar Abdulwahid, in the Wilson Room, Portcullis House on Tuesday, 5th March 2019 from 7:00-9:00pm

The event will kindly be hosted by Bill Esterson MP, Labour MP for Sefton Central.

Iraq and the Kurdistan Region are going through a period of drastic change. Recent elections to both the Iraqi and Kurdistan parliaments have brought new challenges for the country. The failure to complete the formation of a new administration at the federal level has been coupled with the inability of the Kurdistan Region’s parties to finalise a new government more than 150 days after election day, adding further challenges to the fragile peace and security in the country.

The New Generation Movement was founded by local businessman and investor Shaswar Abdulwahid in 2017. The party formed on the back of the "No for Now" campaign, which opposed the 2017 independence referendum in the Kurdistan Region on the basis that it was ill-thought out, premature and lacked the support of the international community.

The New Generation Movement focuses on anti-corruption, economic liberalisation and ending what it regards as the nepotism of the governing Kurdistan Democratic Party and Patriotic Union of Kurdistan. Aiming to offer a substantively different alternative within both Iraq and the Kurdistan Region, the New Generation Movement sees developing a new style of politics and government as its primary objective.

Currently, the party has 4 seats in Iraqi Parliament and 8 seats within Kurdistan Regional Parliament, making it the largest opposition party in a region where the security forces and economy continue to be dominated by the established political factions.

Shaswar Abdulwahid is founder and president of the New Generation Movement. He was born in Sulaymaniyah city in the Kurdistan Region in Iraq, later graduating from Sulaymaniyah University with a degree in civil engineering. He began working in his father’s kebab shop from a young age before moving to Germany in 2001. He returned to the Kurdistan Region shortly after, where he worked in the construction industry as a contractor. In 2007, aged just 28, Abdulwahid founded Nalia Company for real estate and construction, building the housing project known as German Village in Sulaymaniyah.

In 2010, Abdulwahid opened the first ever independent Kurdish TV channel named NRT. In the first week of its launch NRT TV was subject to an arson attack for its independent reporting. On 26th October 2013, Abdulwahid was the target of an assassination attempt in his capacity as the owner and founder of NRT. He survived but suffered injured to his leg. NRT has since continued to flourish, adding another three channels: NRT Arabic, NRT2 and more recently NRT for children.