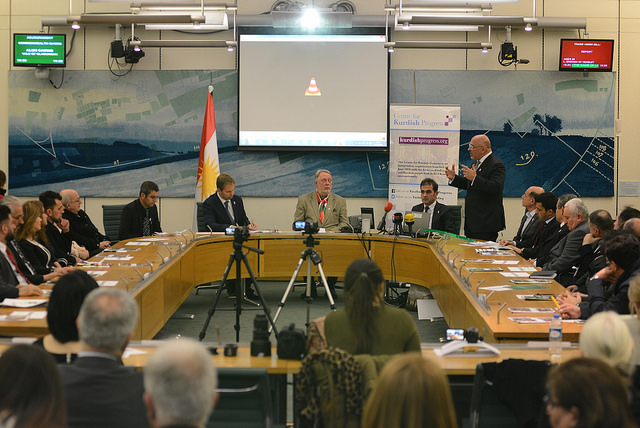 The 'Rally for Halabja Remembrance' was organised by the Kurdistan Regional Government UK Representation in partnership with the All-Party Group on the Kurdistan Region and the Centre for Kurdish Progress, and took place on March 16th at Portcullis House. The event marked the 28th anniversary of the Halabja Chemical bombardment at the hands of the tyranny regime of Saddam Hussein. The event was kindly hosted by Jason McCartney MP and Dave Anderson MP, and chaired by Gary Kent, Director of the APPG for the Kurdistan Region. Contributions were given by Tobias Ellwood MP and FCO Minister for the Middle East, Nadhim Zahawi MP and Vice-Chair for the Kurdistan Region, Labour MP Hillary Benn, and Aram Ahmed Mohamed as Representative of the Halabja Survivors. The event was opened with the Kurdish national anthem, and a minute's silence to remember all those killed and injured at Halabja in 1988.

Although he was unable to attend the event, Karwan Jamal Tahir, KRG High Representative to the UK, provided a message to be read on his behalf. The Halabja attacks turned the happiest month, the time of Newroz where families would celebrate the new year together, into the darkest and saddest time of the year, engulfed by sorrow and heartache. Mr Tahir commended the actions of the international community when in 2003, they helped Iraqi and Kurdish people by liberating them from the tyranny of Saddam Hussein, with perpetrators subsequently tried for their crimes in Halabja. The recognition of the attack at Halabja as a genocide, by the Iraqi High Court and UK parliament is important, he stressed, the international recognition of the dark history of Kurds and to ensure such an inhumane attack never happens again. Now, once again, the Kurds have become the target of genocidal campaigns by Daesh, with as many as nineteen chemical weapons attacks thought to have been targeted at the Peshmerga in the past month. Mr Tahir ended his message by expressing his hope that the UK government will recognise the attack of the Yazidi by Daesh as an act of genocide.

Nadhim Zahawi MP spoke of his shock upon first seeing images of the death and destruction at Halabja in 1988. At that time in the UK, he stated, people did not believe the extent of the devastation, or did not have time to listen to what had happened. This now has changed, he said, with the UK government recognising the sacrifices that the Kurdish people have made. Whilst we must never forget what has happened in Halabja, Mr Zahawi commended the spirit of those in Halabja who refuse to allow themselves to be consumed by what happened on that evil day, to be defeated or broken. After World War II, Mr Zahawi lamented, we claimed that never again would we allow genocide to be committed, however this happened at Halabja, and more recently in Shangal when Daesh attacked and murdered !!br0ken!! Mr Zahawi also commended the courage of the Peshmerga, fighting on the front line for the whole world, and taking the fight to DAESH. Part of the process of remembrance, Mr Zawahi said, is to continue in the determination to get the atrocities at Halabja recognised by a genocide internationally.

Tobias Ellwood MP, FCO Minister for the Middle East, stressed how important acts of remembrance are, in showing our determination to prevent a repetition of a dark past. He stated that we must never forget the systematic persecution of Kurds by Saddam Hussein and regardless of whether the term genocide (as it is an issue of the law therefore a matter of courts not governments) is applied to the Halabja massacre, it was shocking, barbarous, and unforgivable. The UK government was and is a friend of the Kurds, Mr Ellwood stated, referring to the no fly zone implemented twenty-five years ago to protect the Kurds. Referencing the Responsibility to Protect, implemented by the UN in 2005, he stressed that all states have the responsibility to protect their citizens. Mr Ellwood condemned any use of chemical weapons, and stressed the need for accountability. Where DAESH is a threat, the Kurds fight on the front line, again he commended their courage. We must continue to play our part in the global coalition, Mr Ellwood stressed, and to ensure that international institutions uphold international law.

Hilary Benn MP made a surprise appearance at the remembrance rally to show solidarity and support. The fact that so many still feel the pain and suffering of Halabja reinforces our determination, and gives meaning to the phrase 'never again', he said. As human beings, Mr Benn said, we should feel burning shame, and use this to ensure that we play our part in ensuring such a crime never happens again. Referring to his November 2015 speech in parliament regarding coalition airstrikes vote. He was proud, he said, to support the action of Peshmerga and to pay tribute to them. Whilst the only way to truly bring peace is through political negotiations, Mr Benn stressed that we must also have the strength to stand up against those with whom a political negotiation will never be possible, such as DAESH. We must follow the example of the Kurds and Peshmerga in facing up to evil, defeating the fascist ideology of those who think their views, way of life, and freedom to kill is the only way. With the efforts of the KRG, Peshmerga, and all of the allegiances against DAESH, so that the actions of today ensure that 'never again' becomes a reality.

Mr Aram Ahmed Mohamed as Representative of the Halabja Survivors spoke of the thriving society that existed in Halabja prior to the 1988 attack. It was a society in which women led the entire society, with educated, open-minded people. Following the beginning of the tyranny of Saddam Hussein, this changed, he said. We must ask ourselves, what can we do for the victims of Halabja? We must remember and work towards healing not just once a year, he began. There remains an urgent need to find and identify missing children, to help those who have suffered from long-term medical issues, and to help with the trauma of all people in Halabja. The attacks in Halabja, he told, were part of a wider genocide and ethnic cleansing mission that began in the 1960's by the Iraqi government. In remembering the victims, mourners are encourage to cry. Mr Mohamed stressed that we need to change the culture of crying to one of awareness, openness, and hope. The foundation 'From Tears to Hope' is working towards this, for getting international recognition, not just for one day. Without hope, Mr Mohamed expressed, one cannot survive, hope is needed to rebuild a city of peace and tolerance in Halabja.

The event was concluded by a representative of the Halabja Victim Society. He bravely shared his story of his experience living in Halabja in 1988, in which he witnessed his family die around him in the brutal attacks. He then began the long road to recovery, left with both injuries and memories which his carries with him until today.