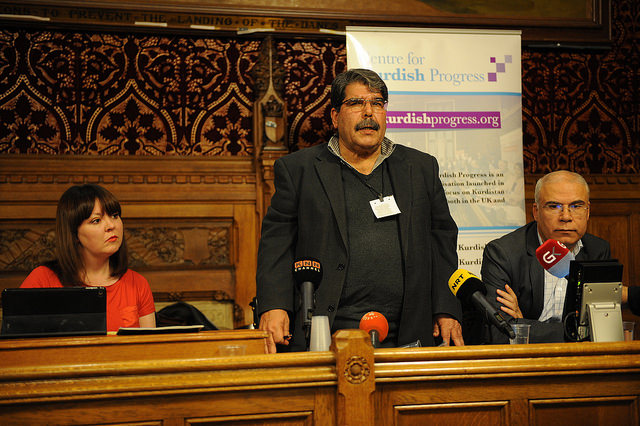 Natalie McGarry opened the event discussing her interest in current affairs in the Middle East and especially Rojava and Democratic Union Party in Syria (PYD) and the Kurdistan Regional Government in Iraq.

Mr Saleh Muslim began by making a statement about an arrest warrant for him in Turkey, and referred to the political situation in the country, but affirmed that he is not a Turkish citizen and therefore argued that this warrant did not apply to him, he also referred to himself as a Syrian, and that he had previously condemned attacks made in Ankara earlier this year.

He discussed the democratic origins of the conflict in Syria in 2011, as an uprising to oust the Assad dictatorship, and relayed how the conflict was intervened in by a variety of international powers, and that some countries wanted to support a moderate Islamic movement, while others such as Saudi Arabia and Iran also had plans. He discussed the bleak outlook in Syria with millions of people affected by either. He expressed a view that Turkey is trying to create a Turkish Empire (rather than Ottoman Empire) including Aleppo, Mosul and Kirkuk and that Iran simultaneously wanted to create a new-Safavid Empire.

Mr Muslim argued that the Kurdish people in Rojava and other groups including Arabs, Turkmens and Syriac peoples to arrange the People's and Women's Protection Units, allowing them to hold onto their territories in 2012. He argued that the people in Rojava for this reason were the only powers able to protect Syrian territory from groups such as Islamic State (IS) and te al-Nusra Front. He also discussed a social contract made between these groups in order to protect women's rights and humanitarian values, while also elaborating on the co-presidential systems of government present in many of the political and social structures in Rojava. He also argued that these efforts could be a potential model for the wider Middle East, and expressed gladness at the naming of 1st November as Kobane day by other countries in the international community.

He concluded by stating that the people of Syria have little hope at present for peace and cited the suspension of the recent Geneva talks as an example but also called for greater international political support for the Rojava cause.

Mr Simon Dubbins stated that the efforts of Kurdish groups across the Middle East and the struggle for Kurdish rights are inseparable from the development of secular democracy and women's rights throughout the region. He praised the work of the PYD in trying to bring about these institutions in Syria. He added that the conflict in Syria had crossed over into Turkey, spreading to Diyarbakir which was gripped by violence. He also commented on his involvement in the campaign to release the leader of the Kurdistan Workers' Party (PKK) Abdullah Ocalan and commented on the shifting discourse of this organisation, away from secession and toward calls for democratic confederalism. He argued that this method would be the only means of creating a peaceful Turkey. He concluded calling for international solidarity for this movement and for the Turkish government to return to negotiations with the PKK to find a political solution to the conflict within Turkey.

Brendan O'Hara MP the Scottish National Party (SNP) defence spokesman also contributed to the discussion. He argued that the profile of Kurdish causes have never been as publicly visible with such a high profile as possible. He added that without a democratic and lasting answer to the Kurdish question, crises across the Middle East would not be resolved. He also concluded calling for more pressure to be placed on the UK government to act on this issue.

Lord Hylton discussed his visits to to Damascus, Aleppo and also the Jazira canton in Northern Syria last year and stated that he was very much aware of the high level of  interference by regional powers in the conflict and its detrimental role. He concluded by calling for as much dialogue as possible to occur as soon as fighting stops.

Nia Griffith MP also made a call for those with knowledge and awareness of these issues to provide as much reliable information to government as possible so as to better direct the actions of the international community in relation to the Syria crisis.

Natalie McGarry MP concluded the event by referring to the Rojava social contract and expressing that both the Kurdish movements in Rojava and social activist campaigners in the UK have a great deal in common in terms of the values they share.

The event was followed by a question and answer session.

Questions included topics such as the incoming Trump administration and its potentially fostering warmer ties with Turkey on the recommendation of Michael Flynn, a newly appointed American security adviser.

Mr Muslim responded by stating his belief that the change in one leader would not impact the international affairs too much, but re-iterated his belief that co-operation with the Syrian Democratic Forces including militias from Rojava would continue to be the best strategy to defeat groups such as IS.

When also asked about the future administration of Syria, he also mentioned a plan for a Democratic Federal Syria of which Rojava would be one among many components. He reiterated his preference for this model when asked about the possibility and desirability of a UN Mandate for Syria and Iraq.

When faced with questions about the nature of democracy in Rojava, he answered that the canton's democracy was not perfect, but that the people of Rojava were open to change and to advice and support from other democratic powers.

Saleh Muslim is the co-chair of the Syrian Kurdish Democratic Union Party (PYD) and the Deputy General Coordinator of the National Coordination Body for Democratic Change in Syria (NCB). Mr Muslim’s political activities on behalf of the collective rights of Syria’s Kurdish community commenced while he was studying in Istanbul in the mid-1970s, when he was influenced by the ongoing Kurdish revolution in Iraq. The failure of that revolution deepened his commitment, and he carried on his own political activity for the Kurdish national cause. He went to Saudi Arabia in 1978 to work as a petroleum engineer with Petromin. He continued his political activities alongside his profession. He returned to Syria in 1995 to carry on his political work, and he, along with his family, was subject to proscription by the Baathist regime. He was one of the founders of the Kurdish Democratic Union Party in 2003. In 2007, his wife was arrested and detained for one year, and Mr Muslim fled political persecution in Syria to join the PYD academy near the Syrian border, in Gare in Kurdistan Region of Iraq. In April 2011, during the pro-democracy uprising, Mr Muslim returned to Syria. He played a principal part in forming the National Coordination Body for Democratic Change in June 2011 and became its Deputy General Coordinator. He became a member of the PYD’s executive council and in 2010 was elected as party head, and in June 2012 he was re-elected as co-president of the PYD along with co-president Ms. Asya Abdullah. Born in 1951 near the town of Ayn al-Arab (Kobani) in the Aleppo governorate, MrMuslim graduated with a chemical engineering degree from Istanbul Technical University in 1977.