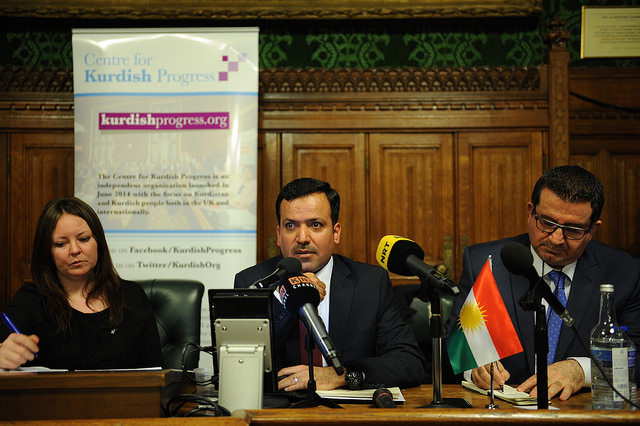 This public forum was kindly hosted by Mr Jonathon Reynolds, Labour MP for Stalybridge and Hyde. The keynote speaker was Mr Yousif Mohammed Sadiq, speaker of the Kurdistan Parliament (Kurdistan Regional Government), with an opening speech from John Woodcock, Labour MP for Barrow and Furness. Chaired by Natalie McGarry, Independent MP for Glasgow East, this public forum addressed the 'Struggle for Democracy and the Fight Against Daesh (ISIS) in the Middle East', highlighting both the internal and external crises in Kurdistan, and possible ways these crises could be addressed.

Mr John Woodcock opened the forum, stressing that there is a need to reaffirm the link between Kurdish people and British people. After welcoming Mr Sadiq and the attendees, Mr Woodcock spoke of his recent visit to Kurdistan, where he visited the front line in the fight against Daesh. He subsequently gave his thanks to the Kurds, who are 'fighting on all our behalf against the evil of Daesh', and expressed that the bond to be reaffirmed between the Kurdish people and British people has been strengthened by the ways in which many Kurdish people have been welcomed into the UK.

Natalie McGarry, the chair of the forum, also spoke of her visits to Kurdistan, having previously visited Erbil and Rojava. Through these visits, she said, she sought to bring back to the UK parliament what is happening to the Kurdish people, so that British people can be aware of the struggle and what is happening in that area to the Kurdish people. At this critical time for the Middle East, she said, the experiences and academic background of Mr Sadiq could provide a unique insight into the crisis.

Mr Yousif Mohammed Sadiq opened by noting his desire to provide an insight into what is happening on the ground in Kurdistan. His talk would be threefold; focusing on the role of the Kurdish community outside Kurdistan, the internal crisis in Kurdistan, and finally the crisis in the Middle East. Mr Sadiq related to potential of the Kurdish diaspora, as a resource for the community, to build a bridge between inside and outside Kurdistan. Commending the support of the Kurdish diaspora, he expressed hope that people would return, yet noted that the current crisis not only forced people to leave, but hindered people from returning. Mr Sadiq then turned to the multifaceted nature of the internal crisis in Kurdistan; the economic, social, and political factors which have contributed are interrelated, he said. Mr Sadiq emphasised the role of the economic crisis, in which there is a lack of infrastructure. There has been a policy focus on oil as the main source of income and sectors such as trade and agriculture have been neglected. This is related, he stressed to poor governance, and political corruption which has seen elites protecting their own economic interests through their power and political positions.

Mr Sadiq heavily stressed the role of the law and political reform when speaking of solutions to the internal crisis. Money given by the Iraqi government could have been spent in a way that benefited the people, he said, and there is a need for advancing the rule of law, introducing the right laws, and reducing the monopoly of control over the market. Kurdistan needs, Mr Sadiq stated, a parliament that represents the real interests of the people, a parliament that is the heart of democracy, coupled with legitimate institutions. Relating to the wider crisis in the Middle East, Mr Sadiq expressed that he sees that the international community have realised that you cannot build peace through security.

Additionally he thanked the resistance of the Kurdish people from every part of the country, and their contribution to the positive reputation of the Kurdish people: the Peshmerga, the women of the YPJ, and the families of the martyrs. Peace was a recurrent theme in Mr Sadiq's speech, as he stressed that we can have a balanced relationship with everyone, through recognition of the role of others, positive dialogue, and legitimate institutions, if we want to see 'a better day for our children, a new day for them'.