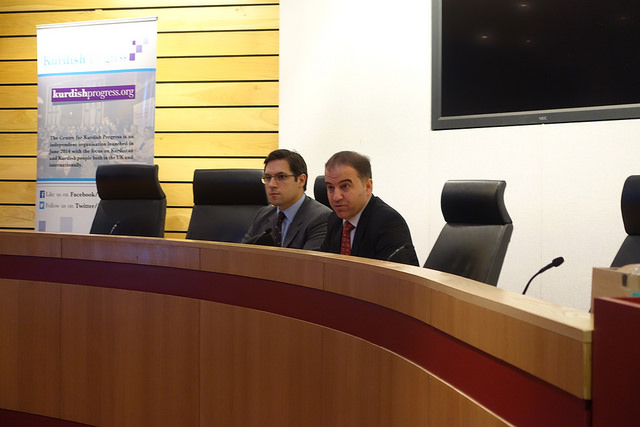 This event was chaired by head of Royal United Services Institute (RUSI) Qatar and Research Fellow for the Middle East Michael Stephens. Various journalists, business people and members of the Kurdish community among others were in attendance.

Keynote speaker Hemen Hawrami said that ISIS is a symptom of the wider illness affecting the region and claimed that ISIS' successes were due to Maliki's failings to represent Iraq nationally and instead his representing only Shias.

Mr Hawrami claimed that Maliki refused to listen to the KDP through various channels including Iran. He added that there were calls from the White House for the Kurdistan Regional Government and Peshmerga forces and the Iraqi Central government to work together against ISIS but Maliki refused again. Maliki listened only when it was too late when ISIS had occupied Mosul and seized weapons caches of 5 Iraqi divisions, Mr Hawrami also stated that Sunni rebellions drove out central government forces.

Mr Hawrami said that the Peshmerga managed to protect areas in Northern Iraq such as Kirkuk from ISIS. ISIS attacked the Peshmerga, out-gunning them with weaponry from Syria including Russian made tanks from Syrian forces, as well as those seized from Iraqis. He stated that ISIS presented the Kurds with the longest ever front line, over 100,000 km long.

According to Mr Hawrami, there was a Kurdish three face strategy to deal with ISIS; hold them back, drive them away and destroy them. The Peshmerga had defeated ISIS and recovered 98% of ISIS held territories in the Kurdish region, amounting to around 20,000 km, moreover he argued that this showed that the myth of an unbeatable ISIS was untrue.

He stated, for instance, that 11,000 ISIS members from last June to the start of this July were killed by the Peshmerga. Other airstrikes had also been helpful, however, he said that more equipment is needed, as the Peshmerga had done 90% of the fighting, and received only 10% of the material support from others.

He continued, saying that on the 21st of January, Peshmerga forces withstood multiple suicide bombing vehicles thrown at them by ISIS, a Peshmerga tank driver took one head on and survived, though he wasn't concerned for his own safety, and had saved 200 fighters. Hawrami also said that one fighter destroyed two suicide bomber cars with an anti tank weapon, and argued as a result that the Peshmerga have the will to win against ISIS.

He continued stating that recovering Mosul was massively important to defeating ISIS, but also that the Peshmerga forces will not take the lead, instead he said that the Iraqi Central government and Sunni Iraqis of Mosul must be willing to take the lead in this campaign. He noted, however, that presently the Sunnis are not organised enough and that the central government is unwilling to assist them.

He considered the impact of a a federal solution to this problem and stated that this would have been preferable for the KRG, but according to Hawrami, Baghdad represents a threat to Kurdistan, and is a liability, for instance in its cutting the budget for the Kurdish region and withholding supplies.

Moreover, he argued that the Shia majority will always control Baghdad, which will cause sectarian problems again. He stated that the KRG wants its region to prosper and that Erbil represents a safe place for people of various groups, shown in that Sunni, Shia and Christian refugees are settling there.

He said that the process of Kurdish independence is happening, the KRG aims to hold two referendums, one for the Kurdistan region's citizens, offering independence or a federal solution and a second referendum for the people in disputed territories and whether they want to be a part of Kurdistan. He spoke about an amicable divorce, or sharing currency and even debts with Baghdad. He also said he wants to work with Sunni leaders to keep ISIS out and defeat them.

He stated however, that in return for the oil the KRG sent to Baghdad which entitled it to 17% of the budget based on a December 2014 agreement, the forthcoming payment was incomplete, and as a result, the KRG began to sell oil independently.

On the issue of Turkey's recent interventions in Syria and Iraq, he noted that the KRG is responsible for around 6 million people, and therefore, its dealings with Turkey rested on two variables, which are Turkey's position towards KRG and Turkey's position on other Kurdish questions.

He stated that between 1991-2007/8 Turkey saw the KRG as a security threat, viewing it through a Kurdistan Workers' Party (PKK) lens. According to Hawrami, for the KRG however, Turkey is seen as Iraqi Kurdistan's gateway to the wider world. He said he did not want to be subordinate to Turkey or anyone else but the people of Iraqi Kurdistan. He said that the KRG had been crucial in getting Turkey to have peace talks with PKK leader Abdullah Ocalan.

On the threat of ISIS, he said he expected more from Turkey especially given its business connections and interests in Iraqi Kurdistan. He agreed with Turkey's recent strikes on ISIS in Syria, but was critical of PKK actions, which he deemed to be irresponsible, such as the killing of two Turkish police officers and other verbal statements, having undermined Ocalan and the HDP, which in his view is not in the strategic best interest of the Kurds in Turkey.

He argued that the Kurdish issue in Turkey is not a military but political issue, and that Turkish policy should focus for example on Kurdish education and favourable constitutional reform towards Kurds, rather than defeating the PKK, if the issue is to be solved.

A question and answer session followed.