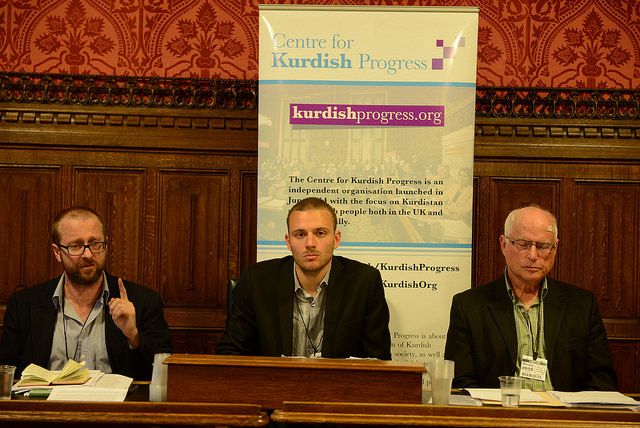 The Kurdish Question and the Chaos in the Middle East

This public forum was kindly hosted by Virendra Sharma, Labour MY for Ealing Southall, and chaired by Dr Federico Venturi of School of Geography at the University of Leeds. Keynote speakers were Dr Michael Gunter, Professor of Political Science at the Tennessee Technological University, and Dr Thomas Jeffrey Miley, Lecturer of Political Sociology and Fellow of Darwin College at the University of Cambridge.

Dr Michael Gunter opened with discussing the responsibility, or rather irresponsibility of NATO countries. The US continues to support Turkey against the Kurdistan Workers Party (PKK). They continue to maintain that a unified Iraq and Syria lead to peace and stability, and the US and the EU keep the PKK on the terrorist list. Despite the broken situation in Turkey, Dr Gunter stressed that the peace process is not back at square one. The international recognition of the Kurdish question has resulted in a new permanency that was unfathomable even a decade ago. Domestically, Dr Gunter said, Turkey must continue to recognise and contend with the expanding Kurdish issue. Interventions by NATO countries have rarely gone smoothly, Dr Gunter Noted. For example, the 2003 Iraq invasion shattered Iraq into sectarian and ethnic parts, and resulted in a country that now only exists in the minds of the US State Department. Turkey, another NATO country, sat by and passively watched as ISIS tried to destroy Kobane, in Rojava, in 2014. Supporting the Kurds in Kobane would mean aiding the PKK in Turkey's eyes, and it suited Turkey that ISIS and Kurds were weakening each other. It is the actions and inactions of self-interested NATO countries, Dr Gunter expressed, that has resulted in the Middle East echoing a Hobbesian struggle of each against all. Dr Gunter concluded by proposing that such experiences should result in lessons learned on all sides.

Dr Miley spoke of the need to look closely at the foreign policy that continues to stir the chaos in the Middle East, as we hope to move away from a Hobbesian state and its ramifications. The War on Terror has been a catastrophe complete with transgressions of international law and criminal invasions. Dr Miley called for NATO countries to finally speak objectively about the long term consequences of their foreign policy, driven by the mentality of fixing through war and bombing. It is exactly their actions and this mentality that allowed for the emergence of ISIS (also known as DAESH). In this current political climate it is the mentality of NATO to crush those who organise against them. Dr Miley said that the hour is dark for Europe. The refugee crisis is framed as such that as if it is not a humanitarian crisis. One simply has to look at the relationship between European forces and Turkey to see the complications 'the refugee deal' bears.

In Turkey, Dr Miley said he sees what is a movement away from the peace process to a country on the verge of a devastating civil war. There has been spillover from Syria, such as the events in Kobane, and the shared engagement by Turkish and Syrian Kurds in the ideas of Ocalan. The promise of what happened in Kobane, Dr Miley said, is the threat to Turkey, to the establishment, and Erdogan. The revolutionary regime in Rojava has become a beacon of direct participatory democracy; multi-linguistic, multi-ethnic and non-sectarian. The revolutionaries in Rojava stay to fight, Dr Miley stressed, because they believe in the revolution, they fight for something that is worth fighting for.

Michael M. Gunter is a professor of political science at Tennessee Technological University in Cookeville, Tennessee and teaches during the summer at the International University in Vienna, Austria. He also teaches for the U.S. government area studies program in Washington, D.C. He is the author of seven critically praised scholarly books on the Kurdish question, the most recent being The Kurds: A Modern History, 2016; Out of Nowhere: The Kurds in Peace and War, 2014; Kurdish Historical Dictionary, 2011; The Kurds Ascending: The Evolving Solution to the Kurdish Problem in Iraq and Turkey,2008; The Kurdish Predicament in Iraq: A Political Analysis, 1999; and The Kurds and the Future of Turkey, 1997. In addition, he is the co-editor (with Mohammed M. A. Ahmed) of The Kurdish Question and the 2003 Iraqi War, 2005; and The Evolution of Kurdish Nationalism, 2007. He has also published several other scholarly books and numerous scholarly articles on the Kurds, United Nations, and other topics in such leading periodicals as the Middle East Journal, Middle East Quarterly, Middle East Policy, Current History, Critique, Journal of Muslim Minority Affairs, Orient, American Journal of International Law, World Affairs, Orbis, and International Organization, among others. In addition, he was a Senior Fulbright Lecturer in International Relations in Turkey. He also has held Fulbright awards for China and Israel. Currently he is the secretary-general of the EU Turkey Civic Commission, an NGO promoting further democratization in Turkey to facilitate its accession to the EU. He has been interviewed about the Kurdish question and the Middle East on numerous occasions by the international and national press.

Thomas Jeffrey Miley is Lecturer of Political Sociology in the Department of Sociology at Cambridge. He received his B.A. from U.C.L.A. (1995) and his PhD. from Yale University (2004). He has lectured at Yale University, Wesleyan University, and Saint Louis University (Madrid); and he has been a Garcia-Pelayo Research Fellow at the Center for Political and Constitutional Studies in Madrid. His research interests include comparative nationalisms, language politics, the politics of migration, religion and politics, regime types, and democratic theory. His publications include: “Democratic Representation and the National Question in Catalan and Basque Politics” (International Journal of Politics, Culture, and Society, October 2013);. “Blocked Articulation and Nationalist Hegemony in Catalonia” Regional and Federal Studies, Volume 23, Issue 1 (2013): 7-26; “'Linguistic Immersion' and Political Conflict in Contemporary Catalonia,” European Journal of Language Policy, Number 1 (Spring 2013) (with Roberto Garvía); “Franquism as Authoritarianism: Juan Linz and his Critics," Politics, Religion and Ideology, Volume 12, Issue 1, No. 1, 27-50, March 2011; “The Constitution and the Politics of National Identity in Contemporary Spain,” Nations and Nationalisms Vol. 16, Issue 1: 6-30 (2010) (with Enric Martínez); “Analyzing the Dynamics of Assimilation in Nationalist Contexts: Is There Really More Assimilation in Catalonia than in the Basque Country?,” European Journal of Political Research, 47: 710-736 (2008) (with Luis de la Calle); “Against the Thesis of the Civic Nation: The Case of Catalonia in Contemporary Spain,” Nationalism and Ethnic Politics 13 (1): 1-37 (January-March 2007); and Nacionalismo y política lingüística: El caso de Cataluña (Madrid: Centro de Estudios Políticos y Constitucionales, 2006). He is co-editor with José Ramón Montero of the Obras escogidas de Juan J. Linz (7 volumes) (Centro de Estudios Políticos y Constitucionales, 2008-2013).

Federico Venturini holds a master degree in Philosophy from the University of Trieste and one in History and European Culture from the University of Udine (Italy). He has just completed a PhD at the School of Geography at the University of Leeds, UK, with the title “A critical perspective on social ecology and urban crises: learning about, with and from urban social movements in Rio de Janeiro”. Aim of his PhD is to explore the relations between modern cities and urban social movements, using Social Ecology as research framework. As part of the Contested Cities research network, he is working with social movements in Rio de Janeiro (Brazil) with participatory/militant methodology. In 2016 he took part to the International Peace Delegation organized by the EU Turkey Civic Commission (EUTCC) which visited Istanbul and the Council of Europe in Strasbourg. Recently he travelled to Turkey, participating in the Newroz in Amed and witnessing the destructions in Cizre. Since 2013, he is member on the advisory board of the Transnational Institute of Social Ecology.