Public Forum with Selahattin Demirtas Co-Leader of the HDP 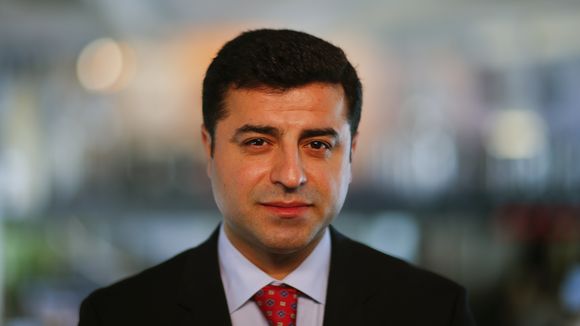 We regret to inform you that due to sudden and unexpected circumstances Mr Selahattin Demirtas will NOT be able to take part in this public forum.

This event is therefore postponed to a future date.

We apologise for any inconvenience this may cause.

The Centre for Kurdish Progress is pleased to invite you to a public forum with keynote speaker Mr Selahattin Demirtas, Co-Leader of the Peoples’ Democratic Party (HDP). His talk will focus on the current political developments in Turkey and Turkey's broken peace with Kurds and democracy.

This event is kindly hosted and chaired by Kate Osamor MP for Edmonton.

The event will take place between 7:00-9:00PM on Monday 24th October 2016 in Boothroyd Room, Portcullis House.

Portcullis House is opposite Big Ben and the Houses of Parliament and above Westminster tube station.

Please note security checks are required to enter Portcullis House. We kindly ask you to arrive at 6.30PM to allow the event to start and end on time. Booking is required for this event to ensure adequate seating available.

Kurds have been in the middle of many conflicts in the region. They have had to struggle for their right to self-determination and have been affected by external conflicts in the countries they reside in. The Kurdish political movement in Turkey has again been hampered by the upheaval caused by the government’s purge of Gulen affiliated public officials following the failed coup attempt on 15 July 2016. 11,500 Kurdish teachers have recently been dismissed due to alleged links with the Kurdish armed group, Kurdistan Workers’ Party (PKK) as well as many pro-Kurdish media outlets have been closed.

Mr Selahattin Demirtas MP will analyse the current political developments in Turkey and in the region from the perspective of Turkey’s pro-Kurdish political party HDP. Several members of the party have been detained and arrested including Deputy Co-Chair Mr Alp Altinors for allegedly being a member of the PKK.

RSVP via link below.

We look forward to welcoming you to this event.

Selahattin Demirtas is Co-Leader of the Peoples’ Democratic Party (HDP). He studied Law at Ankara University. After graduation, he became a member of the executive committee of the Diyarbakır Branch of the Human Rights Association (IHD). The IHD Chair at the time was Osman Baydemir who was elected as the mayor of Diyarbakır in the following local election and Demirtas replaced him as the chair of the IHD Diyarbakır. During his term as chair, the association focused heavily on the increasing unsolved political murders in Turkey. Demirtas is among the founding members of the Turkish Human Rights Association (TIHV) and the Diyarbakır post of Amnesty International.

Demirtas started his political career as a member of the Democratic Society Party (DTP) in 2007. The DTP was closed down by a Supreme Court order in 2009 and the DTP MPs moved to the Peace and Democracy Party (BDP). The BDP held its first congress in 2010 and elected Selahattin Demirtas and Gültan Kışanak as its new co-chairs. Demirtas was the co-chair of BDP during the period when the peace process and negotiations kick-started in Turkey. In 2014 Demirtas and Figen Yüksekdag were elected as the co-chairs of the Peoples' Democratic Party (HDP) – a new initiative originating from a three-year-old coalition of the BDP and various different political parties and organisation under the auspices of the Peoples' Democratic Congress (HDK) - for the 2014 presidential elections of Turkey, being one of three candidates in the run and hoping to gather left-wing votes. He came third with 9.77% of the vote. Demirtas was co-leader along with Figen Yüksekdag during the June 2015 Turkish general election, the party's first campaign in a general election. The HDP came in 4th place with 13.12% of the vote and 80 out of 550 seats.