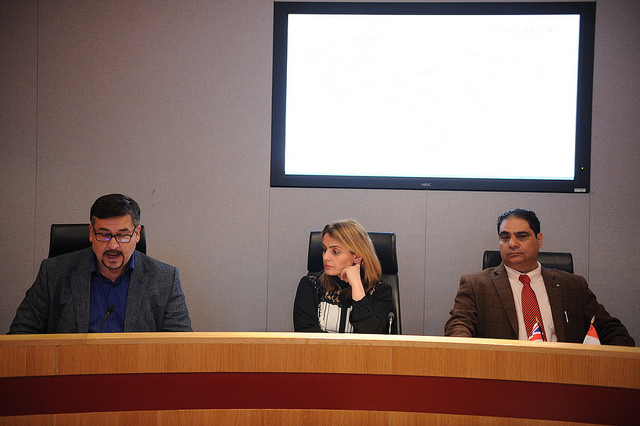 The Centre for Kurdish Progress held a public forum with Nadeem Al-Abdalla, manager of the London-based Anglo-Iraqi Studies Centre (AISC) and Maher Soltan, a journalist and international media advisor to the Imam Hussain Holy Shrine.

The event was kindly chaired by Raife Aytek, Director of the Centre for Kurdish Progress.

The speakers elaborated on divergent aspects of the brutalities committed by Saddam Hussein’s regime against the Kurdish population in Iraq by putting them in a historical context. The forum focused on the socio-political, economic and humanitarian implications of the geopolitical vacuum caused by the fall of the Ottoman Empire vis-à-vis the Kurdish population, particularly the myriad of issues arising from the reallocation and the redistribution of peoples following  the Sykes-Picot agreement.

Mr Al-Abdalla opened the event by setting the historical background to the contemporary issues in the Kurdistan region and beyond. He empasised how Iraq has been repeating the same mistakes over the last century; discriminating against ethnic and religious groups such as Christians, Jews and Kurds who have all been part of Iraq’s modern history. This includes the Faili Kurds or Lurds, who historically lived around the border between today’s Iraq and Iran, and who have been subjected to systematic discrimination, torture and mass expulsions since the 1930s. This continued under Saddam Hussein’s regime, whom Mr Al-Abdalla referred to as ‘’the worst of his kind’’, with the targeting and destruction of many Kurdish villages, leaving 150,000 Failis disposed in Iraq and abandoned on the Iran-Iraq border.

Following Mr.Al-Abdalla’s comprehensive historical background, Mr Soltan, a Faili Kurd himself, further elaborated on the atrocities against Faili Kurds over the years. He explained the socio-political issues facing Faili Kurds, with the fear of expulsion making them reluctant to openly participate in society. Mr Soltan stressed that their reluctance to self-identify presents a great barrier to determining the actual demographics of Failis across the region. He concluded by saying that to this day, Faili Kurds are still systematically underprivileged as it is not possible for a Faili to become an MP; depriving them of their right to political representation. This is due to the fact that in Iraq it is essential to hold a nationality certificate in order to access work, education and other basic rights and opportunities. Without a nationality certificate, many Faili Kurds have been denied access to basic services and rights for at least three decades, Mr Soltan explained.

Both speakers concluded by expressing their hopes that Failis will see their rights reinstated eventually, however, they added that the tumultuous nature of the region and the clashing interests of the neighbouring countries will prove to be a challenge.

Nadeem Al-Abdalla is a political and cultural expert on Iraq and Manager of the London-based Anglo-Iraqi Studies Centre (AISC), which aims to gather, review and present publications written in English about Iraq and Mesopotamia from the last two centuries (www.angloiraqi.org). He holds a BA in English Language from Mosul University and an MA in Politics of Education from Plymouth University. He is currently studying for a PhD at Plymouth University. Nadeem was the official representative of the Iraqi National Congress (INC) in the UK from 2009 to 2015. He was a parliamentary candidate in the 2014 Iraqi elections. Nadeem published a number of books including ‘Bibliography of English Language Books About Iraq’ (2013), ‘Studies in the Politics of Education’ (2014), ‘100 Years Marking the British Campaign in Mesopotamia (Iraq)’(2014) and ‘Anglo-Iraqi Studies Centre Yearbook 2016’ (2017).

Maher Soltan is a journalist and international media advisor to the Imam Hussain Holy Shrine.