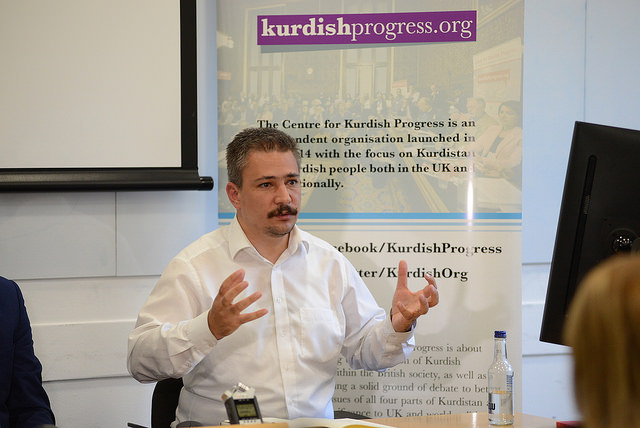 The Centre for Kurdish Progress was glad to welcome Mr. Alp Altinors to London for a talk on very important subject matter at a very pertinent time.

Altinors started from the foundations, and began by talking about the basic origins of the current Turkish regime in the 1980 putsch, which created a framework for authoritarian rule that has persisted to this day. The Justice and Development Party (AKP) came in on a wave of popular support for changing this system, but instead did not change very much at all, and instead used the system to their own advantage.

The AKP never had a real solution to the Kurdish question because it was never in their interest to have one – they were preoccupied instead in retaining power and strengthening their hold in parliament. The breakout of the Arab Spring, Altinors explained, provided another opportunity – to increase Turkey’s international influence, which had been waning since the inception of the AKP as the ruling party, especially with regards to the EU. Turkey actively supported the Arab Spring rebellions wherever they occurred with the goal of establishing an ‘Ikhwanist’ chain of client states throughout the region – promoted actively by Neo-Ottomanists such as Davutoglu. To that end they provided weapons, training, and logistics even to groups such as AQI and ISIS.

The opposition coalition were unfortunately unable to reach the 10% threshold (unique in Europe for its harshness) in order to oppose Erdogan in parliament, and so these measures continued to pass. Gezi Park changed that; it got all of the left together and inspired them to enter the elections as a single party, and not as independents. The HDP emerged from this, and took over 13% in the elections, much to the establishment’s surprise.

The AKP then lost its parliamentary majority for the first time ever – and this at time when they were planning on a two-thirds majority in order to change the constitution. Unfortunately, all of this was unable to affect Turkish government policy towards Kurdistan and the Kurdish question.

Erdogan acting with the Turkish state apparatus began to inflame tensions between the PKK and the army in Turkish Kurdistan, the resulting casualties of which he blamed on the PKK in order to gather public support for a war on them. Multiple massacres such as Suruc began happening in which ISIS attacks by individuals allegedly assisted by Turkish security services bombed socialist pro-Kurdish elements within the country. This of course was blamed on the PKK and used to justify Erdogan’s current genocidal bombing campaign against Kurdish cities in the southeast of the country.

Altinors pressed hard on what the answer was in this situation. The EU had to ignore its fear of migrants and pressure Turkey hard to end its genocidal campaign. The United States also had to take a hostile stance to Turkey on the issue of its bombings and artillery fire against its own cities – which legally constitute blatant war crimes. The cost for Europe, he emphasized, would be greater if we didn’t; it is two to three million refugees now, or fifteen million Kurdish refugees if the bombing campaign continues.

Summarised by Will TG Miller.

Mr Alp Altinors is Member of the Central Executive Committee and Vice President of the Peoples’ Democratic Party (HDP). Mr Alp Altınors was a MP candidate for the HDP representing the city of Samsun on the elections of 7th June, 2015.As a participant of the Taksim-Gezi Resistance of 2013, he was wounded and imprisoned. He represents the Socialist Movement and is a determined advocate of the Kurdish People and their movement. Mr Altınörs founded the 'Nazım Hikmet' Marxist Academy of Sciences  in Istanbul in 2008 where he also gave lectures on Political Economy. He worked as editor of the 'Atilim' newspaper between 2002 and 2007 and is still a columnist in the newspaper alongside writing for the pro-Kurdish Özgür Gündem too. Mr Altınörs is also an English and Spanish translator.