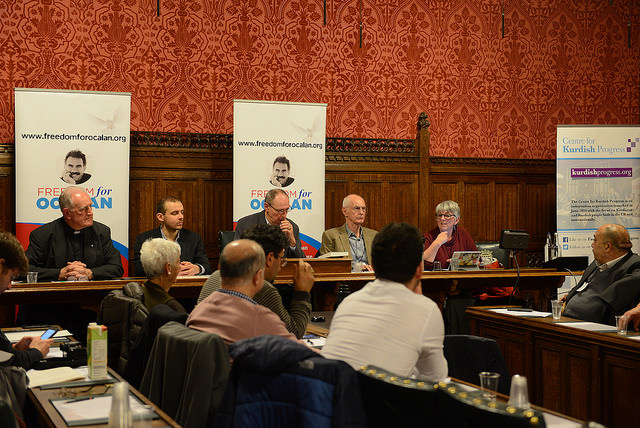 The Centre for Kurdish Progress and Peace in Kurdistan Campaign jointly organised a Public Forum with members of an international delegation organised by the EU Turkey Civic Commission (EUTCC) who visited Turkey with the aim of promoting the Peace Process and a democratic political solution to the Kurdish question.

Photos of the event

Ms Natalie McGarry MP began the event by discussing the current situation in Turkey in relation to the violence between Kurdish militants and the Turkish State alongside the arrest of HDP parliamentarians.

Mr Bert Showenburg the International Officer of the GMB Union chaired the event and began by discussing the importance of international delegations visiting Turkey to witness the ongoing events in Turkey.

Dr Federico Venturini began by discussing the aims of the EU-TUrkey Civic Commission delegation which visited Diyarbakir and Istanbul. He stated that the delegation had intended to but was not able to meet with the Turkish Justice Minister. He also discussed current events including the close down of many Kurdish media outlets and the arrests of HDP MPs and Mayors from the Kurdish Region, as well as the dismissal of pro-peace process academics and arrests of journalists and trade unionists. Dr Venturini also elaborated on the poor prison conditions presently endured by those under imprisonment. He concluded by stating that Turkey is in an increasing cycle of violence nice and that a resumption of the peace process was critical.

Fr. Joe Ryan began by stating how he noticed increases in clamp downs on opposition and Kurdish groups in Turkey since his second visit to the country. He added that the leader of the Kurdish insurgents the PKK Abdullah Ocalan's lawyers had not been able to  visit him for 6 years and commented on the difficulties that these had created for the peace process. He concluded by echoing Dr Venturi's sentiments that a peace process needed to be resumed and argued that the freeing Abdullah Ocalan would be an important part of this.

Jonathan Steele, began his speech by stating that the violence he had witnessed in Turkey was shocking, and condemned the arrests of numerous HDP MPs and the discrimination against this part in particular. He also stated that the number of arrested journalists in Turkey was extraordinary in terms of just how many had been imprisoned. Mr Steele also added that the number of internally displaced people in Turkey number at at least 400,000 was striking given the role of Turkey in giving shelter to Syrian refugees. He added however that there was a possibility that the peace process could be resumed if President Erdogan wins the executive Presidency in the upcoming referendum, but that international pressure would be necessary for this.

Julie Ward MEP began by commenting on her experiences in visiting Turkey previously and noted that she had been detained at Ataturk Airport after stating that she had was flying to Diyarbakir. She also stated that Yazidi refugees were not being adequately supported and were reliant only on the Diyarbakir municipality without funding from Ankara. She also commented on the traumatic experiences of the people of Diyarbakir who have been experiencing quickly escalating violence. Commenting on her most recent visit with the delegation, she stated that the Kurdish population was losing hope for peace, but that many women were remaining strong. She also expressed concern about the future of artists in Turkey after the country's having withdrawn from the creative Europe programme.

Mr Simon Dubbins added that the situation is deteriorating rapidly and blamed this partly on President Erodgan's referendum campaign. He praised the fact that Kurdish issues are attracting greater interest among unions internationally, and that UNITE now updates its reports on these regularly. He also argued that the violence in Turkey's Kurdish region was illustrative of how the Syrian civil war has spilled over into Turkey. He concluded by expressing the importance of raising awareness of the issues in Turkey by visiting the Kurdish region and to show solidarity with those who live within it and the progressive movements that many of these participate in.

Julie Ward is a Labour MEP for the North West of England. She is also a writer, theatre-maker and cultural activist who began her working life on the factory floor before becoming a community arts worker. She is a member of the European Parliament’s committees on Culture and Education, Women's Rights and Gender Equality and Regional Development. Julie is also a children's rights champion; she co-founded the cross-party Intergroup on Children's Rights and sat on the Labour Party’s Children and Education Policy Commission. She is a board member of the European Internet Forum, and a founding member of the European Caucus of Women in Parliament.

Jonathan Steele is a veteran Foreign Correspondent who spent most of his journalistic career with the Guardian. Educated at Cambridge (BA) and Yale (MA) , he was the paper's Bureau chief in Moscow between 1988 and 1994 and Washington between 1975 and 1979.   He has covered wars in Afghanistan, Iraq, Syria, the Balkans, Central America, and East and Southern Africa.  Steele has written six books on international affairs, including South Africa, Germany, Russia, Africa, Iraq and Afghanistan. He has won all the major British journalism prizes  -- twice named as International Reporter of the Year in the British press awards, winner of the James Cameron award, the Martha Gellhorn special award, the Amnesty International human rights award, and the London press club's Scoop of the Year award. He speaks the main European languages:  Russian, German, French, Spanish and Italian. Since 2002 he has concentrated on the Middle East, covering the US-led invasion of Iraq in 2003, the Israeli invasion of Lebanon in 2006, and the war in Syria since 2011.

Rev, Fr. Joe Ryan is a Catholic priest of the Archdiocese of Westminster, UK. He is on his 45th year of priestly ministry in six parishes within the Westminster Diocese. Over the past ten years he is Chair of the Westminster Justice and Peace Commission.  The role of the Commission is to be the Prophetic voice of the Catholic Church inspired by the Gospel message of Jesus Christ and expounding the Catholic Social Teaching. He has been on many visits to Turkey as an international observer including the trials of Kurdish prisoners in Diyarbakir and an Observer Mission at Turkish elections. He also visited a number of other countries with fact-finding teams eg. Philippines, El Salvador, Pakistan, Ghana and Nigeria. The Commission has organised many study days on Migrants, Asylum Seekers, Homelessness, Ecology and Climate Change.

Dr. Federico Venturini is a visiting researcher at the University of Leeds, where he obtained his PhD in 2016. Currently he is part of the project  “Triangle-city cooperation: building joint climate-resilient  development in the Parana basin”, which seeks to assess vulnerabilities,  improve transboundary cooperation and enable cost-effective and inclusive climate-resilient development among three cities sharing  borders within the Parana basin in Paraguay, Brazil and Argentina. In his PhD research he explored with participatory/militant methodology the relations between contemporary cities and urban social movements, using social ecology as research framework. He holds a master degree in Philosophy from the University of Trieste and one in History and European Culture from the University of Udine (Italy). Since 2013 he is member on the advisory board of the Transnational Institute of Social Ecology and since 2016 of the International Imrali Peace Delegation organized by the EU Turkey Civic Commission; he was member of the CONTESTED CITIES FP7 network.