Public Forum ‘Mosul Campaign and Future of the Region’ 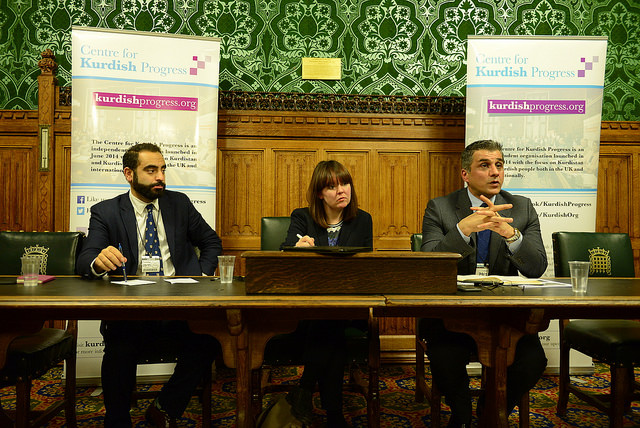 The Centre for Kurdish Progress organised a panel discussion on Tuesday 29th November 2016 on the topic of the Mosul campaign and its implications for the future of the region. Kindly chaired by Natalie McGarry MP, in-depth analysis was provided at the event from Karwan Jamal Tahir and Dr Renad Mansour of Chatham House. Mr Tahir’s experience as a member of the PUK in the Kurdistan Regional Government provided an informed political viewpoint to complement Dr Mansour’s extensive research of the trends in the region.

Following Natalie McGarry’s introductions, Karwan Jamal Tahir opened the discussion with a moment of reflection on the efforts of the Peshmerga in combatting ISIS. He appreciated that it was fortunate that they were in a position to discuss the liberation of Mosul and to push ISIS back. Of course, this is tempered by the reality that it will create a situation that will require careful consideration. Mosul is one of Iraq’s biggest cities and extremely diverse, presenting sectarian issues that will require skillful diplomacy. Additionally, the city has had ISIS’s ideology imposed on it for the last two years, creating new dynamics and posing challenges for residents of Mosul and its surrounding towns and villages to adjust back into the rulership of Iraqi governmental structures. Some efforts are being made to avoid any inflammation of tensions, for example the agreement that the Peshmerga and the Shia militias will not enter Mosul itself - the liberation of the city itself will be the task of the Iraqi security forces. Mr Tahir hoped that the current military coordination will in time result in political cooperation to produce the most equitable result for Mosul and its populace. He added that the international community ought to remain involved diplomatically and militarily as a guarantor of this process.

Dr Renad Mansour stressed that Mosul is the key issue in the region right now and made a four-point analysis of the situation. Firstly, there has been a shift in the power dynamics and relationships between Kurds and Arabs in Iraq over the last five years - Erbil’s oil-driven boom has ended, and with it the feeling that the Kurds are trying to fleece the Iraqi central state for investment just to go their own way; now there is a smugness that Kurdish aspirations of independence have curtailed, producing antagonism between Kurds and Arabs. Secondly, the Kurds themselves have broken down a historically successful united front and their internal divisions are being exposed, for example in the controversy over the impeachment of a minister. However, broadly the Kurds can be said to have limited ambitions in the Mosul area, beyond a desire for good relationships for whoever ends up governing the city and its environs. Thirdly, stability of the area could be upset in future by poor relations between the Sunni tribes, and also the fact that Iraq’s government is perceived as a clique of the same Sunni politicians rather than allowing in representation from other religious groups. Finally, Dr Mansour stressed an area of hope: the development of protest movements in both the Kurdish portion of Iraq and in the south, based not on religious differences but rather on the desire for material improvements, possibly signposting a move beyond sectarianism and a desire for better administration instead. Mansour concluded on a consciously happy note: the KRG is working with the government now, continuing a historical trend. “There is a willingness for cooperation.”

The panel then fielded questions and in-depth discussion on topics including Turkey’s claims on Mosul, the KRG’s and the government’s responsibilities to Yazidi Kurds, the role of Shia militias in the Mosul campaign, and the relationship between the KRG and the Rojava cantons in Syria.

Karwan Jamal Tahir is Kurdistan Regional Government (KRG) High Representative to UK. Mr Tahir joined the Patriotic Union of Kurdistan (PUK) in 1991, becoming a member of His Excellency Jalal Talabani’s Special Bureau. He continued to work in a number of departments within the PUK until 1998, when he travelled to the United Kingdom for his undergraduate studies. On July 2003 he completed his BSc in Computer Science and Management, at the University of Manchester Science and Technology (UMIST). Mr Tahir served as an Adviser to the General Enterprise for Special Projects, at the Kurdistan Regional Government’s Council of Ministers, from 2004 to 2007. Prior to his appointment as the Deputy Minister, for the Department of Foreign Relations in 2009 to 2015, Mr Tahir served as a Senior Adviser, to the Minister of Natural Resources for two years. He played a pivotal role in the Ministry of Natural Resources strategic plans and relations with the IOCs. As well as leading three Management Committees, while participating as a member in many more.Renad Mansour is an Academy Fellow at the Middle East and North Africa Programme at Chatham House. Prior to joining Chatham House, Renad was an El-Erian Fellow at the Carnegie Middle East Centre, where he examined Iraq, Iran and Kurdish affairs. Renad is also a Guest Lecturer at the LSE, where he teaches a MSc course on the International Relations of the Middle East. He is a research fellow at the Cambridge Security Initiative based at Cambridge University, where he held positions as lecturer and supervisor at the faculty of politics. He received his PhD from Pembroke College, Cambridge.