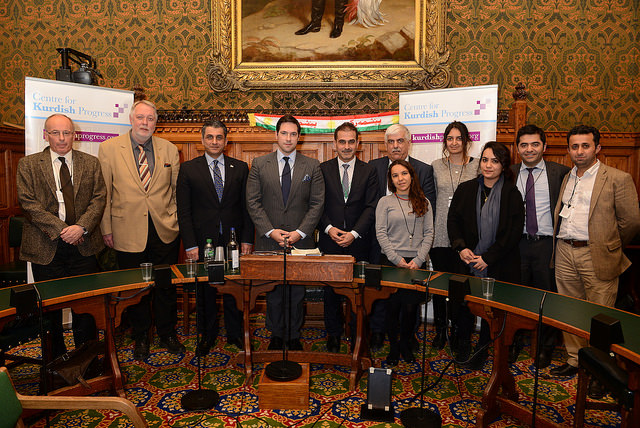 The Centre for Kurdish Progress organised a debate where Kurdistan Regional Government (KRG) High Representative to the United Kingdom, Mr Karwan Jamal Tahir,  Mr Bill Park of King’s College and Mr Michael Stephens of the Royal United Services Institute discussed the impact of ISIS, also known as Daesh, in the region and globally and the role of the Kurds in the fight against ISIS.

Mr Gary Kent, administrator of the All-Party Parliamentary Group on the Kurdistan Region of Iraq, chaired the debate, saying that he had returned some weeks ago from four days in Kurdistan with seven MPs, who had been to the front line only a couple of miles away from Daesh.

Mr Karwan Jamal Tahir referring to the economic crisis due to a dispute between the national government in Baghdad and the Kurdistan Regional Government (KRG) in northern Iraq over the latter’s foreign oil sales and 1.8 million who have been internally displaced because of the conflict with ISIS,  said: “We don’t think the major threat is Daesh, the major threat is an economic threat, and also a political threat.”

Mr Tahir emphasised the critical nature of the dispute with Baghdad, but he stated that KRG’s priority is defeating ISIS. Therefore, he added that although the decision on airstrikes in Syria was a matter for Britain, they would prove successful and would help the local forces’ efforts against ISIS.

Our second speaker Michael Stephens said that a problem with the international response to Syria was that key regional players Russia, Iran, Saudi Arabia, Qatar, Turkey and Hezbollah had different priorities for intervening. Another issue is how various countries enacted different rules of engagement, with Britain refusing to bomb ISIS convoys with civilians present, while the United States had suggested a more flexible approach, at the cost of ‘collateral damage’. He said that half of the arms being used by ISIS had been stolen from the Iraqi army, including 1,000 all-terrain, four-wheel-drive vehicles, with others taken from al-Assad’s forces originally supplied by Russia, such as T55 tanks.

Mr Stephens also questioned an assertion by the Prime Minister that there are 70,000 moderate rebels fighting in Syria, unallied to either ISIS or al-Assad, and that he had asked for clarification on the source of this figure. Disrupting ISIS’s oil trade may have reduced its daily earnings to $600,000, Mr Stephens said, but that breaking local smuggling lines had cost young Syrians their only jobs amid the conflict, resulting in their options being to head for Europe, or take the $65 dollars a day and more offered by ISIS to new recruits.

Our final speaker Bill Park said: “The Peshmerga [KRG military] have won the battle against ISIS, they’ve got most of the territory back that was lost. But ISIS doesn’t really know what defeat is, they have snipers everywhere, and they never quite go away, they just go down the road.”

Mr Park warned of ISIS sleeper agents within the KRG, and that from now on the situation will likely go downhill, with international sympathy for the Kurds in their struggle potentially turning out to be transient and limited. Mr Park said that despite the United States professing that the Peshmerga was a key ally in the ground war against ISIS, American policy remained unchanged in that it continued to arm the KRG only through Iraq’s national government in Baghdad, which was refusing to provide heavy weapons to the Peshmerga, in what he described as ‘a big mistake’.

Mr Park said that in the past after such conflicts international diplomats would meet and redraw state boundaries, in part to prevent their recurrence. This had happened to Iraq and Syria in the aftermath of the First World War, but that the United Nations had since vowed to respect existing sovereign territories. However, he said that William Hague, former Foreign Secretary, wrote in the Daily Telegraph on 24 November that these borders ‘should not be considered immutable’, and that ‘Kurds have shown their ability to run their own affairs.’

You may listen to speeches of each speaker on the links below:

Mr Karwan Jamal Tahir is Kurdistan Regional Government (KRG) High Representative to the United Kingdom. He joined the Patriotic Union of Kurdistan (PUK) in 1991, becoming a member of His Excellency Jalal Talabani’s, Special Bureau. He continued to work in a number of departments within the PUK until 1998, when he travelled to the United Kingdom for his undergraduate studies. On July 2003 he completed his BSc in Computer Science and Management, at the University of Manchester Science and Technology (UMIST). Mr. Tahir served as an Adviser to the General Enterprise for Special Projects, at the Kurdistan Regional Government’s Council of Ministers, from 2004 to 2007. Prior to his appointment as the Deputy Minister, for the Department of Foreign Relations in 2009 to 2015, Mr Tahir served as a Senior Adviser, to the Minister of Natural Resources for two years. He played a pivotal role in the Ministry of Natural Resources strategic plans and relations with the IOCs. As well as leading three Management Committees, while participating as a member in many more. During his tenure as the Deputy Minister, of the Department of Foreign Relations, Mr Tahir promoted the Kurdistan Region’s relations with the international community on a political and cultural level, through participating in numerous conferences around the world and engaging with the diplomatic community in Erbil. On June 2015, Mr. Tahir was appointed as the Kurdistan Regional Government’s High Representative to the United Kingdom. He endeavour’s to further strengthen bilateral relations between the KRG and the United Kingdom’s government, think-tanks, NGOs, educational institutions, with cultural and trade organisations.

Mr Bill Park is a Senior Lecturer in the Department of Defence Studies, King’s College, London University, and is based at the UK Defence Academy, Shrivenham. He is the author of journal articles, book chapters, and monographs on a range of Turkish foreign policy issues, including its EU accession prospects, Turkey and ESDP, the Cyprus problem, Turkey’s policies towards Northern Iraq, Turkey-US relations, the Fethullah Gulen movement, and the Ergenekon affair. Among his publications is ‘Turkey’s policy towards Northern Iraq: problems and prospects’, Adelphi Paper No. 374, published by the International Institute for Strategic Studies.  His book, ‘Modern Turkey: People, State and Foreign Policy in a Globalized World’, was published by Routledge in 2011. He is currently conducting a longer-term study of the three way relationship between Turkey, the US and the Kurdish Regional Government in Northern Iraq in the wake of the US troop withdrawal from Iraq. He is a frequent visitor to Turkey, and has given papers on Turkish affairs at various academic and official workshops and conferences around the world. He has appeared as a Turkey expert on British, Turkish, Russian, French, Iranian, Iraqi London and Portland, Oregon and Australian TV and radio, has given written and oral testimony on Turkish issues to both UK Houses of Parliament, and is occasionally used as a consultant on Turkish issues by various UK government agencies. He serves as a trustee and council member for the British Institute at Ankara, and is an Advisor to the Dialogue Society in London.

Mr Michael Stephens is the Deputy Director of RUSI Qatar, having joined RUSI’s London office in September 2010, first in the Nuclear Security Programme, then in International Security Studies. His recent research has focused on Arab Shia identity across the Middle East and its relationship with Iran. He is also a specialist in Qatari foreign policy and Gulf security, writing about issues of society and security from his base in Doha. As a frequent commentator on Middle East affairs, his writing has appeared in many news outlets and he is also a regular broadcast commentator. Michael studied at King’s College London and in the Middle East.