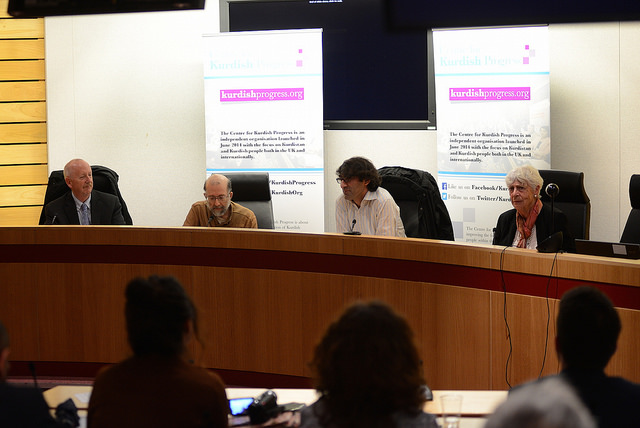 This event organised by the Centre for Kurdish Progress in partnership with the Centre for Turkey Studies hosted Barrister Professor Bill Bowring of of Birkbeck College University of London and a Barrister and Mr Atilla Balikci of the Centre for Criminal Law and Criminology within Paris X Nanterre University as keynote speakers. Ms Margaret Owen who had recently returned from Cizre as part of a Women's Delegation invited by the Women's Congress of Diyarbakir shared her observations.

The event was chaired by Mr Les Levidow.

Les Levidow opened accusing Turkey's AKP (Justice and Development Party) government of sabotaging the Kurdish peace process by conducting aggressive military campaigns against Kurdish PKK (Kurdistan Workers' Party) fighters and also civilians in Cizre and elsewhere in Turkey in an attempt to stay in power by courting Turkish nationalist sentiments. He stated that the AKP government has good relations with the EU and is capable of delaying progress on the Kurdish Issue in this way.

Professor Bill Bowring began his speech by discussing previous cases he had dealt with in Turkey that included village destruction and kidnappings by Turkish security forces, alongside his work in trying to ensure the protection of human rights in Turkey, and with the Progressive Lawyer's Association (CHD) some of whom had been imprisoned.

Professor Bowring discussed the origins of the Kurdish issue in the early days of the Turkish Republic beginning in 1923 with Mustafa Kemal Ataturk, following the First World War. He discussed Ataturk's adoption of a French-style model of state as part of his attempt to promote unity by encouraging all groups in Turkey to identify as Turkish, in the same way the French constitutional style only recognises citizens regardless of whether they come from minority communities as "French". Within this period other late 19th to early 20th Century notions of national self-determination and the right to it. Professor Bowring argued that the Kurds were a people or nation in the same way as Scots in the UK or Corsicans in France, and therefore were entitled to this right, but were impaired by the Treaty of Lausanne among others that divided up Kurdish-inhabited territories between five countries, including Iraq and Turkey. He noted that newspapers in Turkey that used words such as "Kurd" and "Kurdish" had been the targets of state repression, having been accused of being "terrorists" and continued, stating that Kurdish activists' efforts to gain recognition as a distinct cultural group by the Turkish state had been the source of great tension in recent years, encompassing issues such as the teaching of Kurdish language in schools. He also noted that the PKK remained on the European Union's list of terrorist organisations which has stunted progress despite efforts within the European Parliament to have it removed.

Mr Balikci opened stating that the Kurdish Issue was not exclusively a Turkish problem but also a European problem, given the role of European powers in dividing up former Ottoman territories after 1918 and creating mandates in Syria and Iraq, and therefore also in dividing Kurds across borders. He argued also that the Kurdish Issue was also a European issue in that around 3 Million Kurds are found living in Europe today. He added that the events of 9/11 2001 had changed the driving focus of legislation in Europe from freedom to security. In doing so, he argued that European countries and the US as well began to list their "enemies" namely Islamist groups and other organisations and individuals considered "terrorists". He stated that Russia, the EU and the US did not consider the PKK as a significant threat and they were therefore left off the "Terrorist Organisation" lists. Later on however, he continued, with the PKK's addition to these lists, Kurds in Europe, especially Germany and France were prosecuted for making pro-PKK statements including waving flags, shouting slogans and wearing pro-PKK t-shirts.  He noted however that in the UK, Kurdish organisations such as the Kurdish community centre in London had not been closed down, but that in Paris had been. Mr Balikci stated that EU definitions of terrorist organisations, which include movements attempting to drastically change or "de-stabilise" the political situation or status-quo of a country, are problematic because this could outlaw other social movements such as Trade Unions, and perhaps even those who had participated in the Arab Spring in Middle Eastern and North African countries, campaigning for democracy.

Margaret Owen began her speech criticising British counter-terror laws for having resulted in the arrest and prosecution of a young Kurdish-origin woman, Silan Ozcelik, who had attempted to join Kurdish fighters against IS in Syria. She continued to discuss her time in Cizre, and that while there she had seen evidence that Turkish Gendarme and police forces had kept a brutal curfew on the city, using serious weaponry including rockets and bombs on its residents. She stated that firing had been indiscriminate and that even a nine-year-old girl had been killed. She continued to note that pro-Kurdish HDP (People's Democratic Party) co-mayors were subject to arbitrary arrests and were dismissed from their duties, and that towns where HDP votes had been high in the June 2015 elections had been victims of severe violence from Turkish security forces. She continued stating that future confrontations with PKK militants in Turkey would be all the more costly in human terms as this would be urban rather than mountain and countryside warfare. She closed by re-iterating calls from Kurdish lawyers in Turkey for international oversight of the coming elections this November.

The speeches were then followed by Q and A session.