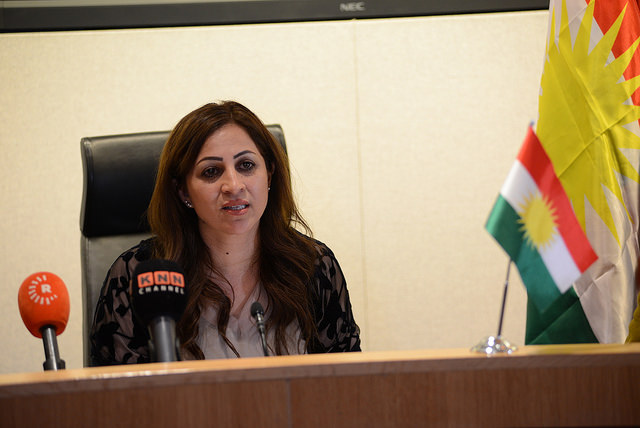 On 8th July 2016, the Centre for Kurdish Progress had the honour of hosting a public forum event by the esteemed Ms. Evar Ibrahim Hussain Ababakr, Kurdistan regional government MP. Ms Ibrahim is well-known in Kurdistan for her tireless activism and efforts to draw attention to women’s rights, both in the Kurdish parliament as well as in other areas of Iraq. The forum was chaired by Dr Burcu Ozcelik of Cambridge University.

Ms Ibrahim began by thanking the Centre for Kurdish Progress and the Kurdish community in London for giving her the opportunity to talk about the very important issue of the plight of Yazidi women in the last two years of conflict since the emergence of ISIS. Ibrahim noted the importance of the UK as an ally against ISIS, and emphasised the importance of international co-operation in the fight.

Ibrahim then turned the scope of the talk to Kurdistan as a whole, mentioning the multiple disasters that Southern Kurdistan, (Bashur) has seen at the hands of the Iraqi state. Ibrahim spoke of these not as unrelated events, but as an unbroken series of events from the brutal crackdown on the 1983 rebellion through the genocidal Al-Anfal Campaign up until the present day incursions, all of which have come at the hands of “Arab regimes”.

Ibrahim spoke of the important differences between general Arab Iraqi society and Kurdistan, like how mainstream Iraqi politics is dominated by the Sunni-Shi’a divide and the struggles for power that consequently ensue. Conversely, Kurdistan – especially some areas like Shingal (Sinjar)– feature large religious melting pots where Yazidis, Christians, Shi’as, and Sunnis all coexist. This was the case right up until ISIS swept into Kurdistan from Syria and Iraq over two years ago.

Ibrahim then went on to give specifics on the immensity of the problem facing the Yazidi Kurdish communities. She relayed to us stories that she had heard from escapees in refugee camps in Kurdistan of terrible massacres and acts of unfeeling brutality. She explained how, because of the Islamic law which ISIS nominally upholds, captives would have to be ‘married’ before being raped – but that there was no limit on the number of marriages which she could be subjected to. One woman, she said, was ‘married’ 23 times in one night.

While around 2800 Yazidi women are still understood to be in captivity, even the approximate 800 that have been liberated are not yet fully free. They suffer from terrible psychological trauma such as PTSD and severe depression. Suicide is a serious risk for many. Most of them have had their male relatives murdered and as such have nowhere to go and no-one to care for them, and with all of their property destroyed or taken by ISIS, this leaves them utterly destitute.

That meant that there were two key tasks:

・To secure the freedom of the women still enslaved by ISIS

・To ensure the psychological and physical welfare of the liberated women

Thankfully, said Ibrahim, Iraqi Kurdistan is currently increasing the strength of its international relationships and reaching out for foreign assistance to speed along both aims. She asserted that her colleagues in the Kurdish parliament were doing their absolute best to accomplish both aims and to save the Yazidi women from their terrible fate.

Ibrahim ended her speech on this note to respectful applause from all before opening the floor for questions.

Summarised by Will TG Miller.