Public Forum From Peace Process to Conflict in Turkey 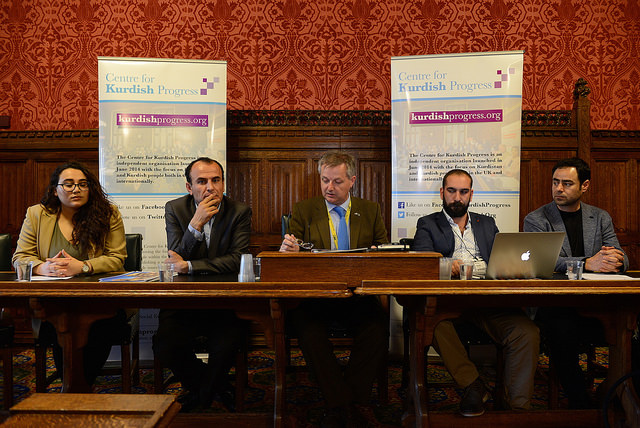 See photos of the event

The Centre for Kurdish Progress' Public Forum From Peace Process to Conflict in Turkey: State Violence and the Media's Role in Polarisation, took place in Westminster on May 18th 2016. The event was kindly hosted by Natalie McGarry, independent MP for Glasgow East and chaired by Brendan O'Hara Scottish National Party (SNP) MP for Argyll and Bute.

Keynote speakers were Mr Faysal Sariyildiz, Peoples' Democratic Party (HDP) MP and former journalist, and Mr Kadir Suleyman Kacan, journalist and human rights activist. The meeting was opened with the opened by recognising the relationship between Kurds and the SNP, who share struggles for self-determination.

Mr Sariyildiz opened the meeting by first saying he would not speak on the past, on what people of done, of how people have been killed together, how dozens have been killed in south eastern Turkey in times gone by. Instead he spoke of 2016 and what the Turkish state have done in this year alone. As the eyes of the West and the world's most powerful governments looked on, people have been left to die in basements, burned to death. Mr Sariyildiz told of the children the babies, the students who have been killed or left to die in Cizre. He recounted how when the first people were trapped in the basements, he was ignored by MPs and officials. The UN and EU then turned a blind eye to the words of Mr Sariyildiz. Mr Sariyildiz gave a personal account and showed photos to the room, of what he witnessed with his own eyes in Cizre this year. There were only burnt remains left of some victims. In two days in February alone 175 bodies were taken to the morgue. When the curfew was lifted they went down to the basements where people had been trapped, only to see that they had been completely burnt out.

Mr Sariyildiz spoke of the constant government conspiring that went on to hide what had happened in Cizre. They claimed the curfew was lifted after sixteen days, when in reality it lasted for almost eighty. They tried to get rid of evidence by throwing bodies in the river. This, Mr Sariyildiz stressed, was proof of their crimes in itself. Mr Sariyildiz told of two young boys he met, who took a phone and went back to Cizre to document the atrocities that had happened, because there were no journalists left. When Mr Sariyildiz went to the police, they claimed that the remains in Cizre were those of animals, not people. The photos shown by Mr Sariyildiz, he said, are importance because they are proof. Only recently the Turkish Prime Minister claimed that there was peace and order in Cizre. There cannot be, Mr Sariyildiz said, because in reality there is nothing left. Mr Sariyildiz stressed that in every single way, millions of people have become silenced. People are angry at the conflict that deepens every day in Turkey, a country becoming more and more like Syria as time passes.

Mr Kacan spoke of how the Turkish have always lived in the way Mr Sariyildiz spoke of by going against peace and implementing death. The peace process was a better time for journalists, Mr Kacan lamented, journalists were free and could say more. It was almost a prestige to report on the Kurdish people. When, in March, negotiations were signed by both sides Erdogan denied their existence. From there, everything changed. Mr Kacan told of an expose written by two journalists, in which they revealed that the government was working with ISIS. A court case was filed against the journalists, who were subsequently charged with treason for exposing state secrets. The journalists had videos and photographs to support their claims, however the state claimed that they had no proof. In the wake of this incident, Mr Kacan said, over 3000 websites have been banned and 2000 journalists have been charged with assaulting Erdogan.

Mr Kacan highlighted the West's role in this. The Turkish government had the migration crisis to use against Europe. Unfortunately, the mentality of the West has applied the same to refugees, said Mr Kacan. Under the Convention of Human Rights someone who feels that their security is threatened can move and have the rights of that country. This is not happening for refugees, for Kurds. Mr Kacan emphasised that in 2016 the EU has put Turkey as a guard, and sold the freedom and rights of many people. Mr Kacan called for British MPs to not be afraid of being the opposition, to raise their voices and not to give up their arena. They must do better and stand up for their values.

The speeches were followed by a Q&A session.

Mr Faysal Sariyildiz is Peoples’ Democracy Party (HDP) MP for Sirnak. He studied Mechanical Engineering at Harran University. He worked as a freelance Mechanical Engineer and consultant for nine years. He also worked as a manager in a Vehicle Inspection Station District office. Mr.Sarıyıldız worked as a correspondent in Gundem, Ozgur Bakis and Azadiye Welat newspapers. In 2009, in the local elections, he was elected as a councillor in Cizre. In the same year, as part of the political genocide operations under the name of Koma Civaken Kurdistan (KCK) trials, he was arrested and imprisoned for 5 years. In July 2011 general elections, he was elected a member of parliament for Sırnak from ‘Labour, Freedom and Democracy Block’. In June 2015 general elections, he was elected MP from the HDP for Sirnak. When the June general elections were re-held in November 2015, he was again elected. He is a member of Soma Mining Accidents Parliamentary Commission and of the Industry, Commerce, Energy, Natural Resources, Information  and Technology Parliamentary Commission.

Mr Kadir Suleyman Kacan is a journalist. He studied Business Administration at İstanbul Kultur University. He began his journalism career at a news portal, demokrathaber.net . He took part in “1915,Diyarbakır and Kurds” project within the İsmail Besikci Foundation. In the same project he was the coordinator of various events. Mr Kacan was responsible for the network of an NGO which supports Yazidi refugees who took shelter in Turkey after the invasion of Sengal by DAESH (also know as ISIS). He has started working with refugees as part of a civil society initiative after the Sengal invasion and following the Kobane process. His work focuses on refugee rights, human rights, freedom of expression and freedom of media.