Public Forum 'Democratic Confederalism and the Kurdish Case in Turkey' 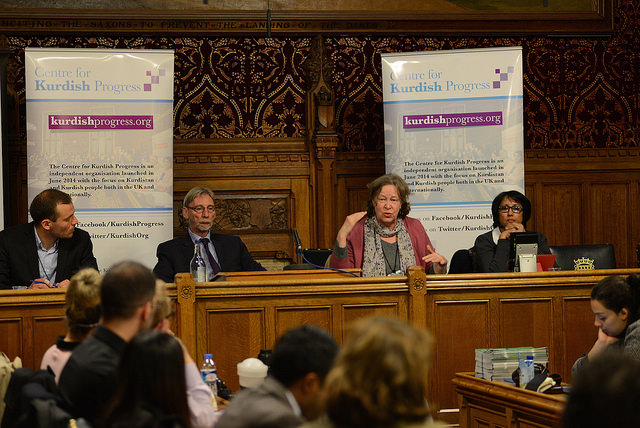 The public forum, entitled Democratic Confederalism and the Kurdish Case in Turkey, was kindly hosted and chaired by Labour MP George Howarth for Knowsley. The first speaker was Janet Biehl, long time collaborator and companion of American social theorist Murray Bookchin. The legacy of Bookchin's conceptualisation of a bottom-up, face-to-face democracy can be seen in the work of Abdullah Ocalan and the democratic confederalism of Rojava-Northern Syria. Second speaker was Dr Federico Venturini. After completing his PhD, Mr Venturi travelled to Turkey as part of Imrali Delegation. The final speaker was journalist, writer and activist Rahila Gupta, who has a strong focus on women and gender-based violence.

Host George Howard MP began the evening by highlighting his role as a supporter of Turkish accession to the European Union. He told of his admiration of the Kurdish people and the contributions that they continuously make to conflict resolution, especially in Iraq and Syria. Kurdish people, Mr Howard stressed, are always part of the solution and never the problem.

Janet Biehl provided intriguing insight into the life and ideas of Murray Bookchin. Bookchin was raised with a communist/lennonist/marxist education. However, when he realised that the working class were not in fact revolutionary, as Marx proposed, he departed from Marxism. Throughout his life he sought to uncover the limits of capitalism. Bookchin proposed that cities should be de-centralised into a human scaled society, which he termed 'eco-communities'. He saw the nation-state as inherently oppressive, producing passive consumers and few active citizens. Power should be taken from elites in capital cities and the capitalist industry, and spread out amongst the de-centralised communities. By 2002 Ocalan realised that such a kind of confederation could be suited to Kurds. If they couldn't have a top-down nation-state, then a bottom-up polity as proposed by Bookchin could be the answer. Ocalan heavily opposed the oppression of women. Thus when the democratic autonomy of Rojava was declared in 2011 it was essential that women were included, all ethnicities rather than rigid puritans were accepted and historical mistakes corrected. Each locality would have people meeting and making decisions. Kurd, Ms Biehl argued, take theory more seriously and use it to build a good society in the best way they know how.

Dr Venturini gave an account of a 2014 peace delegation to Turkey in which he participated. The delegation went to Turkey to meet with the Minister for Justice and address the question of what are the key problems of the peace process. They also sought, but were denied, permission to visit Ocalan on Imrali Island where he has been imprisoned. Dr Venturini highlighted the fact that whilst repression has increased in Turkey, Europe remains silent. Europe has turned a blind eye to the curfews, destruction and displacement within Turkey. 300 people died during curfews in Cizre, 10,000 houses were damaged and about 1300 were destroyed. Dr Venturini spoke of departing this week to Strasburg, to visit the Council of Europe on a peace delegation. Peace can only be achieved through a real peace process, he said. Quoting Nelson Mandela, only free people and free prisoners can negotiate, Dr Venturini claimed that freeing Ocalan plays a big role in this process The wall of silence needs to be broken in Europe regarding what is happening in Turkey. What is happened? 'What I witnessed is a real civil war', Dr Venturini stated.

Rahila Gupta spoke of her recent visit to Rojava-Northern Syria, where she saw a struggle to bring to existence a new society, a new political system, a revolution. She told of meeting a female guerilla fighter, who gave up getting married and spent time in prison, for the revolution. The two-pronged approach of Rojava is changing hearts and minds, along with systemic change. The YPJ has shown people the capabilities of women when they are given the opportunity. The most important thing to them, she said, is to kill the repressive ideology. In order for liberation there are three sexual ruptures of women's enslavement: the rise of patriarchy is followed by the intensification of patriarchy through religious ideology. Finally, there will be the end of patriarchy in which masculinity is reshaped so that it is no longer defined in relation to power over women. This was proposed by Ocalan when he wrote kill the dominant male. Through legislative changes, including the banning of child marriage and dowry payments, there has been an assault on patriarchy in Rojava. This, Ms Gupta said, is patriarchy on its needs.

Janet Biehl is the author of several books on social ecology, including Ecology or Catastrophe: The Life of Murray Bookchin (2015). Her books The Murray Bookchin Reader (1997) and The Politics of Social Ecology: Libertarian Municipalism (1998), as well as numerous articles, date from the years of her 19-year collaboration with Murray Bookchin. Now that the Kurdish freedom movement has picked up on his ideas, she has translated (from German into English) several books on that subject, including Democratic Autonomy in North Kurdistan (2013) and Revolution in Rojava (Pluto Press, forthcoming). Living in Burlington, Vermont, she earns her living by copyediting book manuscripts for Alfred A. Knopf, Penguin, W.W. Norton, and other publishers in New York City.

Federico Venturini holds a master's degree in Philosophy from the University of Trieste and one in History and European Culture from the University of Udine (Italy). He has just completed a PhD at the School of Geography at the University of Leeds, UK, with the title “A critical perspective on social ecology and urban crises: learning about, with and from urban social movements in Rio de Janeiro”. Aim of his PhD is to explore the relations between modern cities and urban social movements, using Social Ecology as research framework. As part of the Contested Cities research network, he is working with social movements in Rio de Janeiro (Brazil) with participatory/militant methodology. In February 2016 he took part to the International Peace Delegation organized by the EU Turkey Civic Commission (EUTCC). Recently he travelled to Turkey, participating in the Newroz in Amed and witnessing the destructions in Cizre. Since 2013, he is member on the advisory board of the Transnational Institute of Social Ecology.

Rahila Gupta is a freelance journalist, writer and activist, a longstanding member of Southall Black Sisters, an advocacy and campaigning group for women escaping domestic violence and chair of the Nihal Armstrong Trust which funds families of children with cerebral palsy to buy cutting-edge equipment and services. Her articles are published in the Guardian, New Humanist, New Internationalist and openDemocracy among other magazines, journals and websites. With Kiranjit Ahluwalia she wrote Provoked, the story of a battered woman who killed her violent husband and co-wrote the screenplay based on the book and released as a film in 2007. Her last book, Enslaved, on immigration controls, published in 2007, was described by Emma Thompson as ‘one of the most vital books of the new century’. Her verse play Don't Wake Me: The Ballad of Nihal Armstrong was nominated for three awards and was selected by the British Council as part of their international showcase in Edinburgh 2013 and went on tour to USA and India in 2014. She and Bea Campbell are collaborating on a book, Why Doesn't Patriarchy Die? which will investigate how patriarchy fits with diverse political systems.