Public Forum 'Democratic Autonomy and the Fight against ISIS' 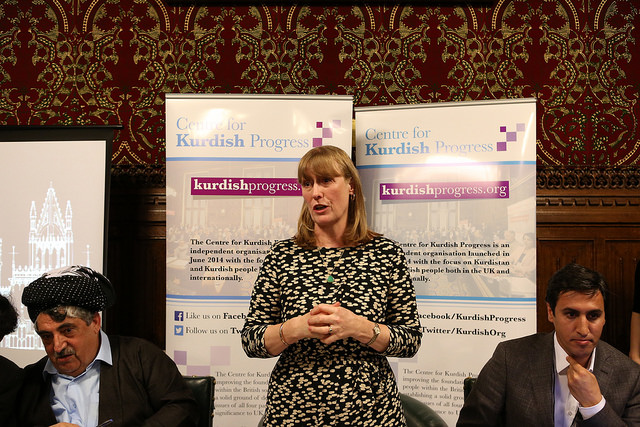 Joan Ryan introduced the discussion as coming at an extremely important time. It is an extremely volatile time in Turkey, with the breakdown of the peace process in 2015 and subsequent violent clashes in the streets. The Kurds, she said, are on the forefront of history, against the backdrop of the world's worst refugee crisis since the second World War. Tom Brake spoke of his experiences working with various communities, those who were working to achieve autonomy, some degree of independence. He highlighted the responsibility of the opposition and the public to challenge the current government, who remain preoccupied on trade relations with Turkey. We should not, he argued, be allowed to ignore people's fight for human rights.

Mr Kamerun Yuksek of the DBP spoke first. Mr Yuksek spoke about his party's democratic project, which he explained as essential for national unity in all parts of Kurdistan. The 21st Century, will be the Kurds' century, in which misfortunes of the past are overcome to make way for a hopeful future. The Kurds, Mr Yuksek said, are the oldest settled people in the Middle East but have not gained the status that they deserve. They live under the sovereignty of four nation-states, before that they were under the Persian and Turkish empires. The solution, Mr Yuksek claimed, is the democratic autonomy project. Mr Yuksek spoke of achieving autonomous rights within existing borders, retaining essential trade and communications as a way to resolve problems and for people to live without conflict. There is a need, he said, for education, law, resources, to be given to local government. In addition, Mr Yuksek advocated for Kurdish to be the official language of government and for the symbols of Kurdistan to be used in addition to the Turkish flag. Mr Yuksek paid tribute to the sacrifices of his people in realising this dream. Mayors and co-mayors had been arrested and imprisoned. In the past seven months 1050 party members have been arrested. Areas where curfews have been imposed have seen people become refugees in their own country. As it stands, Mr Yuksek said, the biggest obstacle in the struggle for rights is the AKP government. When the Middle East was reformulated following World War 1, the Kurds did not benefit. Now, after 100 years, the reformulation of the region would allow Kurds the chance to regain their rights. Despite their great sacrifices, Mr Yuksek spoke of his hopes to see the Kurds gain the rights and freedoms that they seek, in this century. For this to happen, Mr Yuksek advocated for the development of diplomatic relations to have good relations with neighbours. Now, he said, the international community is more aware of the Kurdish people, as one of the most prominent people working to establish peace.

Mr Muhammed Haji Mahmud was a commander in the Peshmerga from Kirkuk after Mosul was captured by Daesh. On the 100 year anniversary of the Sykes-Picot agreement, he spoke of his hope that the colours of the lines will change, and there will be an end to the persecution of Kurds in the Middle East. Mr Mahmud praised the remarkable ability of Kurds, despite the absence of a state, to keep their history, tradition, culture alive. Major turning points for Kurds came with the invasion of Kuwait, the introduction of UN Security Council Resolutions, and the expulsion of the Saddam Regime in Iraq. Despite their limited capabilities and supplies, Mr Mahmud spoke of the Peshmerga's brave fight against ISIS. People from all parts of Kurdistan, rose with the Peshmerga to the challenge of fighting the well-organised terrorist group. This unity was a huge achievement. Mr Mahmud recalled sending Peshmerga to Kobane, Rojava, breaching three official state borders, in the aim of unity. Since then, he said, there has been losses of life along with psychological and social consequences to the war. Kurds are an integral part of the world-wide anti-terror campaign that calls for the unity of nations, and it is for this that they are recognised and respected on an international level. Mr Mahmud lamented on the international fight against IS. Few members of the coalition have considered putting troops on the ground in the fight against ISIS. In reality, Mr Mahmud said, you cannot even control a village without troops on the ground. He voiced his disbelief at the possibility that the coalition are fully fighting IS and can't eliminate them – this, he said, raises some serious questions. When Mosul and Raqqa are liberated, what will be the position of Kurdish liberation? What is needed, Mr Mahmud explained, is a new way to live together. There should be an end to people being used for political gains, the people should be asked what they want in the form of a referendum. Why should Kurds not have that right? Nobody discusses the role of Kurdistan in the refugee crisis, Mr Mahmud said, explaining that they have taken in nearly 2 million refugees. They are excluded from the Geneva Summits. Mr Mahmud proposed 'turning the table around' – when there is a war people use it for their own aims to create a state, so why not use democracy and peace to create a nation.

Mr Kamuran Yuksek is co-chair of the Democratic Regions Party (DBP). He studied electronic communications at Ankara University from 1997 to 2000, but dropped out to join the Kurdish political movement. He was elected to be a young leader of the People’s Democracy Party (HADEP) youth branch between 1998-2000.  He worked for HADEP between 2000-2003. After HADEP was closed and banned, the Democratic People’s Party (DEHAP) was established and Yuksek was elected to be youth leader of DEHAP between 2003-2005.  After closure of all Kurdish political parties he was elected to be a member of Party Assembly of the Democratic Society Party (DTP) which was the new Pro-Kurdish Party. In 2007 he was elected for DTP’s Central Board of Directors. He served as Deputy Chair of the DTP until when he was arrested in 2009 due to political activities. He was imprisoned from 14 April 2009 to 14 April 2014 due to political struggle for democracy and Kurdish rights in Turkey. When Yuksek was in prison the DTP was closed down and banned in Turkey. After his release from jail he was elected to be leader of the Peace and Democracy Party (BDP) and the BDP re-structured itself and changed its name to Democratic Regions Party (DBP).

Mr Muhammad Haji Mahmud, or better known by his affectionate name 'Kaka Hama', has been at the forefront of the Kurdish struggle in Iraq for decades. Kaka Hama took up arms more than 40 years ago against the oppressive regime of the former Iraqi dictator Saddam Hussein. He has since fought in over 700 battles and has been seriously wounded six times. He played a key role in liberating Iraqi Kurdistan from Saddam Hussein and contributed to the formation of the new Iraqi government after the fall of the Ba’ath regime. After ISIS captured Mosul in the summer of 2014, Kaka Hama started commanding the Peshmerga forces from the Kirkuk front. His son was killed battling ISIS whilst defending this strategic town last year.