Public Forum ‘Future of Kurds in Turkey and in the Middle East: Democracy and Fight against ISIS’ 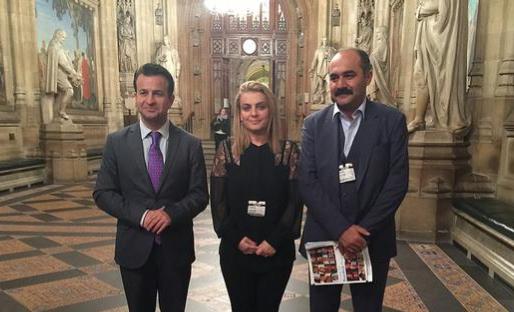 Mr Berdan Ozturk opened the event with an in-depth analysis of contemporary Turkish politics. He blamed the breakdown of the peace process that had endured until 2014 on two key factors: military developments in Rojava - Syrian Kurdistan - that threatened Turkey’s interest in the region, and the success of the HDP in the 2015 elections. He reiterated the HDP’s position of opposition to the July coup attempt but decried the mass arrests that have followed, especially those based on very dubious grounds, such as teachers affiliated to the Egitim-Sen union. He further criticised the lack of observation of these prisoners’ human rights, relating stories of twelve prisoners staying in cells built to hold four, and people being prevented from seeing their lawyers for up to five days. Mr Ozturk concluded by criticising the authoritarian and censorship-ridden path he believes Turkey is following under President Erdogan, and presented the ‘only solution to crisis in Turkey right now’ as democratisation.

Mr Salar Mahmood described the history of Kurdistan, beginning his analysis with the Sykes-Picot agreement of 1916 that drew up the borders of the modern Middle East. He focused his talk on criticisms of not only regional governments, but international powers - he named Britain and America foremost amongst these - as responsible for upholding the geopolitical status quo, in spite of the success of the multicultural project of autonomy across Kurdistan that extends to Turkmen, Yazidis and other ethnic groups. He criticised the provocative actions of Turkey both in Syrian and Iraqi Kurdistan. Nonetheless, Mr Mahmood affirmed his great hope in the ability of the Kurdish people to establish a working model of autonomy and later independence, both within Kurdistan and with the assistance of the Kurdish diaspora. It is his view that an independent Kurdistan is integral to peace in the Middle East.

The speakers then fielded questions on the process of democratisation in Turkey, the groundwork needed to establish an independent Kurdistan, the nature of democratic autonomy, and a number of other inquiries. The Centre for Kurdish Progress would once again like to thank our speakers, the chair, the House of Lords, and the audience, all of whom contributed to making the evening a great success.

Mr Berdan Ozturk is Peoples’ Democratic Party (HDP) MP for Agri, Turkey since June 2015 General Elections. He studied law at Marmara University. After working as a trainee lawyer he pursued a master's degree in the University of London, specialising in International Arbitration and Commercial Law. He is a freelance lawyer since 2011 and has been involved with Mesopotamia Association of Aid, Solidarity and Culture which supports families who lost family members in conflicts (MEYA-DER) and Human Rights Association (IHD). He is currently a Phd Candidate.

Mr Salar Mahmood is a Member of Parliament of Kurdistan Regional Government and is currently Head of Civil Society Affairs Committee. He was Head of Human Rights Committee between 2009 and 2013. Mr Mahmood studied Kurdish Language and Culture at University of Sulaimani. He is a member of Patriotic Union of Kurdistan.