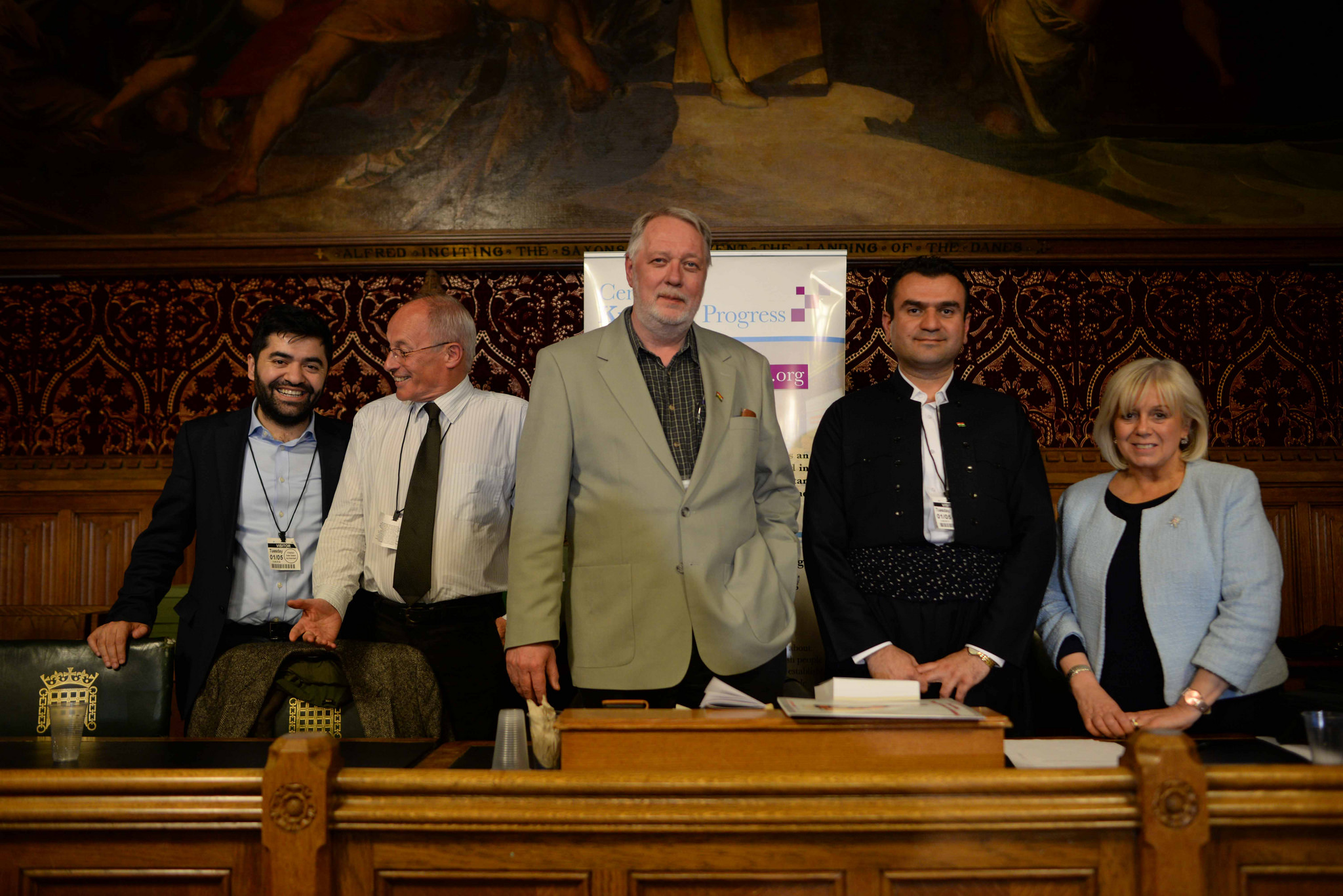 The Centre for Kurdish Progress held a public forum with Dr Mohammed Shareef, Lecturer in Politics and International Relations of the Middle East at University of Exeter and Fellow of the Royal Asiatic Society (London) and Bill Park, Visiting Research Fellow in the Defence Studies Department, King’s College, London on 1st May.

This event was kindly hosted by Mary Glindon, Labour MP for North Tyneside in the House of Commons and chaired by Gary Kent, Secretary of the All-Party Parliamentary Group on Kurdistan.

Having experienced a series of challenges since holding an independence referendum on the 25th of September 2017, the Kurdish Regional Government (KRG) in Iraq has undergone a period of significant political change. Our keynote speakers analysed the recent developments in the region and the international response to the independence referendum.

Dr Mohammed Shareef outlined the developments since the referendum date in 2017 in his speech. He referred to Baghdad’s invasion of Kirkuk and other disputed areas that were covered by the Kurdistan Independence Referendum on 16thOctober and argued that Iraq’s response was disproportionate considering the current Iraqi constitution states a voluntary federation of Iraq and Kurds only attempted to enjoy their right to self-determination proscribed by the international law.

Dr Shareef also analysed the reactions from neighbouring countries and the West. He said that the Kurdish leadership might have miscalculated the possible responses from the international community, however, he insisted that there were many mixed messages regarding supporting independence of the Kurds in Iraq. Dr Shareef said that Turkey and Iran were both concerned about losing control over the Kurds in Iraq as both countries rely on the Kurds from trade to security in the region.

Dr Shareef spoke about reactions from the European Union and the US and said that they were concerned that the independence referendum might cause further instability in the region. He argued that the Kurds are the West’s strategic ally only when it suits them and when there is hostility in Iraq and in the region.

Bill Park began by saying that it is not yet clear whether the referendum is a historical one or it’ll be a footnote in history as he argued that although Kurds have the right to self-determination, great powers as seen in history do not tend to support such projects. Although it seemed right to go for the referendum considering it was soon after the defeat of ISIS, he said, like Poland during World War I, sometimes new borders emerge when it is also geopolitically right for the world.

Bill Park spoke about the West’s concerns for further instability in Iraq and Turkey and Iran’s concerns regarding their territorial integrity if Kurds in Iraq were to become independent from the federation. He argued that the US would not support an independent Kurdistan so long as there is a stable Iraq to fight for against Iran. He said that including Kirkuk and other disputed areas in the referendum had a detrimental effect as the Kurdistan Region in Iraq has now lost access to Kirkuk’s oil because of this decision. Park finished by saying that the referendum was not a good step in terms of real politics.

Bill Park is Visiting Research Fellow in the Defence Studies Department, King’s College, London. He serves as a council member for the British Institute at Ankara (BIAA), is an editorial board member for the journal Mediterranean Politics, sits on the international advisory panel for the journal Turkish Studies, and is an advisor to the Centre for Turkey Studies (CEFTUS). He was Visiting Scholar at TOBB-ET University in Ankara January-April 2016. Among his publications are his book ‘Modern Turkey: People, State and Foreign Policy in a Globalized World’, published by Routledge in 2012 and numerous journal articles and blogs. He is currently gathering material for a book on Turkey’s multiple Kurdish problems. He is frequently consulted on Turkish politics by government departments, parliamentary committees and others, and has also been used by various media outlets as a Turkey expert.