Public Forum 'Armenians, Kurds and Turks: Towards a Peaceful Resolution of a Painful Past' 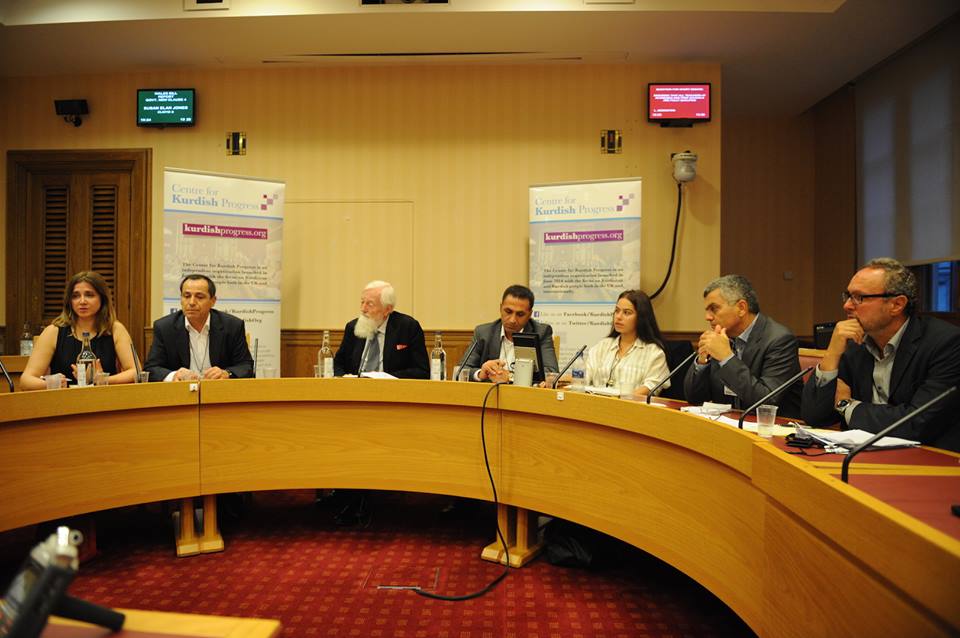 The London-based Centre for Kurdish Progress in partnership with the Gomidas Institute organised a public forum on bridge-building between the Armenian and Kurdish communities in Turkey. Lord Hylton hosted the event in Committee Room 4A in the House of Lords.

Four guests spoke at the event: Ara Sarafian, the Executive Director of the Gomidas Institute; Huseyin Olan, co-mayor of Bitlis representing the Peace and Democracy (BDP) party; Ozcan Birlik, co-mayor of Mutki and hailing from the same party; and Dr Tunc Aybak, Programme Leader of International Politics and Law at Middlesex University’s School of Law.

Ara Sarafian opened the event by describing his career in the field of cultural dialogue, beginning with the complete silence surrounding the Armenian Genocide when he began working in 1980s Ankara. He charted his path through academia as a means to uncover the historical truth of the event, including key points such as contradictions between reports from the then-newly released Ottoman Archives and the official state story of the events, which drove him to consult overseas archives on the issue. The Gomidas Institute was the result of this investigation, focused on countering the denialist position of the state by engaging in public debate, for which the Kurdish population in particular had a strong appetite. In 2013 Gomidas began work in Diyarbakir to begin the process of cultural bridge-building which resulted in heartfelt  public apologies and gestures of reconciliation, work which was later repeated in Bitlis. He concluded by emphasising the spirit of empathy and desire to cooperate with the Kurdish population in the face of current government repression.

Huseyin Olan, speaking through a translator, focused on the parallels between the historical Armenian and contemporary Kurdish experiences, seeing both populations as victims of systematic campaigns of repression organised by a ‘single-party state’. He advocated democratisation as the only way to end this process and to bring peace between the peoples of Turkey. He also spoke with pride about the way many Armenians in Bitlis have recently been able to re-embrace their historic identities.

Ozcan Birlik, who also spoke via translator, related the historical case of how Turkey, once an area of several diverse populations, has been an arena for expulsions and assimilation. He expressed the view that Kurds hold a special sympathy for Armenians having seen the 1915 Genocide so close to home, and related personal experience on how the event is being mirrored today by the Turkish state’s employment of snipers and replacement of democratically-elected mayors in Kurdish principalities with AK’s ‘trustees’, as well as purging of teachers. He reported that he had been informed by Mehmet Ocalan, brother of the imprisoned Kurdish ideologue Abdullah Ocalan, that the latter had drafted a peace plan that could be implemented within six months. He ended with words of support for how the model of democratic confederalism employed in Rojava, in northern Syria, offered a model for ‘supporters and advocates of humanity’ to employ in bringing peace between the peoples of Turkey.

Dr Tunc Aybak chose to focus on the nature of apologies. He mentioned that Turkey has been called a ‘republic of denial’, and that denial is not a condition but a process; the ‘final part of a genocidal act’ and an attempt to be ‘exempted from legal and moral responsibility’. He contrasted President Erdogan’s use of apology as a glib diplomatic tool - ‘the state apology is a form of rebranding’ - with the apologies made by Kurdish communities in Diyabakir and Bitlis  - ‘the Kurdish apology is genuine’. He described taking full responsibility for the role the Kurdish population was complicit with the genocide as ‘commendable’. He expressed concerns that even today the existence of Kurds and Armenians as distinct groups were being presented as threats to the state’s sovereignty. He advocated being in touch with the past as a means of building bridges and increasing cultural cohesion, remarking ‘memory is an important part of the reconciliation process’.

These speeches prompted an enthusiastic question and answer session. Issues discussed included the danger of arrest for the two guest co-mayors on their return to Turkey, asked by Jon Lubbock; the role played by women in re-asserting cultural identity after genocide, a question posed by Margaret Owen; and the differing methods that pressure can be brought on the Turkish state in the international arena to return to the pre-2014 atmosphere of peace with the Kurds, posed by Estella Schmid amongst others. Lord Hylton closed the debate by remarking that all attendees, whether British citizens or residents, ought to maintain pressure on their MPs to seek a change in the UK’s policy in regards to Turkey and its ethnic unrest.

Huseyin Olan is Co-Mayor of Bitlis in South-Eastern Turkey. He graduated in 1986 as a pharmacist. He was member of the Turkey's Pharmacist Union between 2007-2011. Since the 1990s, he has been member of the Kurdish parties which later have been closed by the Turkish state. He has also been part of establishing the Peace and Democracy Party (HDP) in Bitlis. He was elected as co-Mayor of Bitlis in 2014 under Peace and Democracy Party (BDP), which has changed its name to Democratic Regions Party (DBP).

Ozcan Birlik is Co-Mayor of Mutki in South-Eastern Turkey. He graduated in Literature in 2002. After a long period of working as a teacher, he became representative for Education and Science Workers' Union in Mutki. He was elected as Co-Mayor of Mutki in 2014 under Peace and Democracy Party (BDP), which has changed its name to Democratic Regions Party (DBP)

Ara Sarafian is a historian by training and the executive director of the Gomidas institute in London. He has worked on various projects in Turkey over the decades, including in Van, Bitlis and Diyarbakir.

Dr Tunc Aybak is the Programme Leader of International Politics and Law, at School of Law, Middlesex University. He graduated from School of Political Science, Ankara University in International Relations and Diplomacy. He completed his PhD at the University of Hull in International law and Politics. He teaches on BA International Politics and MA International Relations programmes specializing in critical studies in geopolitics and diplomacy, foreign policy analysis.. His current research areas and field work include Turkish and Russian relations, human rights issues in Europe and the geopolitics of the Black Sea and the Middle East regions. As a political analyst he has been widely interviewed by international media, such as BBC, TRT British, Australian and Turkish and Russian, Brazilian, Eastern European media. His publications, among others, include the Politics of the Black Sea and Migrant's Voice in Europe and academic articles on Turkish Foreign Policy, Russian-Turkish Relations, citizenship and migration issues in Europe. He also acts as an editorial adviser to Global Faultlines Journal. He recently published an academic article on 'Geopolitics of Denial: Turkish State’s ‘Armenian Problem’, Journal of Balkan and Near Eastern Studies ( Vol. 18 (2) 2016.