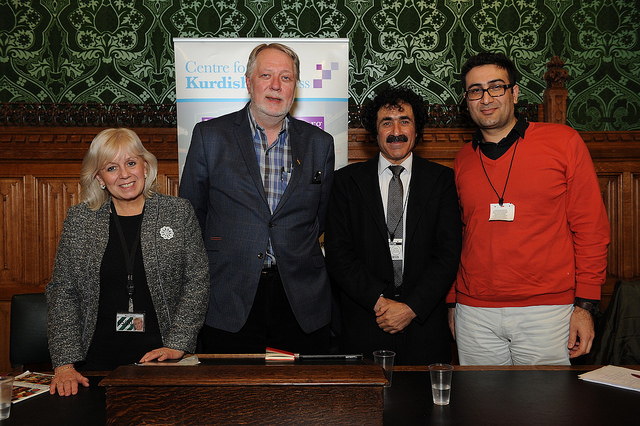 This public forum was hosted by Mary Glindon, MP for North Tyneside and chaired jointly by Mary Glindon MP and Gary Kent, Director of the UK's All Party Parliamentary Group on the Kurdistan Region.

Our keynote speaker was Mr Farhad Sangawi Member of Parliament in the Kurdistan Region of Northern Iraq Parliament.

Mary Glindon MP began the event by discussing her experiences as an MP meeting with representatives from the Kurdistan Region in Iraq (KRI) in Britain and also introduced the topic of oil and sustainable development in the the region and how an over reliance on oil could be harmful to this.

Co-Chair Gary Kent opened his speech by discussing his role as director of the All Party Parliamentary Group in campaigning for the British Government to support the KRI against IS. He also recounted his experiences of recently visiting a Christian village in Mosul and the devastation experienced by the city, and gave praise to the exemplary tolerance of religious diversity in the KRI. He also spoke of the necessity of Kurdish unity in the region to defeat Islamic State (IS) militarily and ideologically, and reflected on the increasing likelihood of KRI independence from Iraq.

Mr Farhad Zangawi opened his speech discussing oil as a hindrance to democratic development in the Middle East and praised the democracy of the Western world. He mentioned the oil-rich area of Kirkuk. He discussed the historical significance of this, discussing the role of Germany in uncovering this oil in the lead up to the First World War during the Ottoman period. He continued stating that oil was a leading reason for the British and French occupation of the Ottoman Middle East, adding Mosul to the newly founded Iraq shortly after the First World War. He concluded therefore that oil had damaged the position of the Kurds in the Middle East and commented on the Sykes-Picot agreement as partly responsible for the difficulties suffered by them.

He also commented on Saddam Hussein's nationalisation of Iraqi oil which resulted in the arming of a vast swathe of the Iraqi population including oil. He also added that this led to the militarisation of the society and the armed resistance of Kurds to the Baghdad government. He added that this spirit of resistance has remained in the KRI. He expanded on Saddam's use of the money he had gained from the oil revenues to bribe officials, journalists and even others abroad. This according to Mr Zangawi restricted democratic development in Iraq including the KRI and the wider Middle East.
He speculated that if not for the US-led coalition which toppled Saddam, Saddam's children would have continued in this tradition of bribery and corruption through oil money.

He added that Saudi Arabia would not have been able to spread its extremist ideology without oil-wealth, comparing this with Jordan who though a monarchy, lacking in vast oil reserves had not developed similar systems and ideologies in the region.  He continued, stating that oil money is used presently in the KRI to undermine democratic structures such as elections by buying votes, voices and support. He concluded, with the Kurdish proverb for those who stir up trouble and cause strife referring to such people as having a "tail of oil" with reference to groups such as Al Qaeda and IS. Mr Zangawi ended his speech, saying that in spite of this, he would continue to struggle for democratic  development in the KRI.

Sangawi has been a Member of Parliament since 2014 and is the founder of Georgis Fathullah, an organisation which works to defend ethnic and religious minorities in the Kurdistan Region at a time when religious and political extremism is on the rise.

Sangawi has long worked to promote greater understanding between different ethnic groups and political factions. He has carried out hundreds of reconciliation sessions with members of the public in areas that have experienced tensions.

Sangawi was a member of the Peshmarga forces from 1980 to 1990 and he is best known for his courageous work as a journalist in the 1980s during the conflict between the Peshmerga and the army of the Saddam regime.