NEWROZ RECEPTION 2018 & THE MOST SUCCESSFUL KURDS IN BRITAIN AWARDS 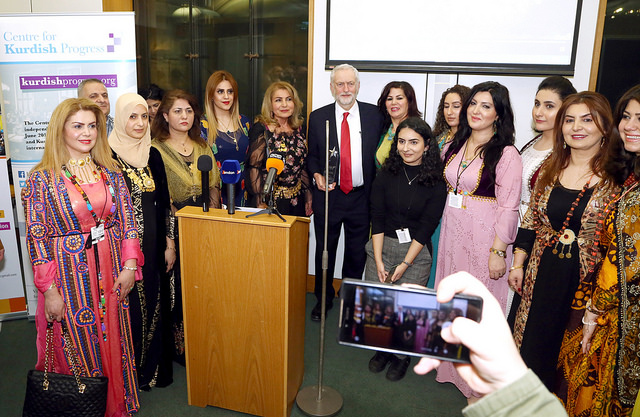 On Wednesday the 21st of March, the Centre for Kurdish Progress and the Kurdish People’s Democratic Assembly of Britain held a reception in the Attlee Suite of the British Houses of Parliament to mark Newroz – traditionally celebrated by Kurds as the beginning of spring and the start of a new year.

The evening brought together members of the Kurdish community from all parts of Kurdistan, who were joined by supporters of the Kurdish cause from across the UK’s political spectrum. Conservative MP Jack Lopresti, who was kindly hosting the evening along with his Labour colleague Ian Austin, passed on a message from Prime Minister Theresa May. The keynote speech was made by leader of the Labour Party Jeremy Corbyn MP, who called for an immediate end to the Turkish military operation against Kurdish groups in Syria and emphasised the importance of including Kurds in a political settlement across the region.

Presenters of the reception and the awards were Zeynep Kurban and Shina Saeed.

The reception was also used to recognise the outstanding achievements of Britain’s Kurdish community through the Centre for Kurdish Progress’ 4th annual ‘Most Successful Kurds in Britain Awards’.

The 4th Most Successful Kurds in Britain winners are as below:

Businesswoman of the Year

Sefaret is one of the founding partners at MIYA specialising in Personal Injury with 15 years of experience. She completed her LLB Law Degree in Turkey before completing her GDL and LPC at BPP Law School. Sefaret is fluent Turkish and Kurdish and is actively involved with the Turkish and Kurdish Communities.She has been doing a live radio programme every week and has given advice on personal injury cases. She also writes regular articles for a local newspaper in London.

Jian is an activist for the Kurdish rights. She is Director of  Majd Ltd and lives in Manchester.

Businessman of the Year

Kazhaw Anwar is Director of the Shapost, which is an international cargo company based in London and Kurdistan. Kazhaw has sponsored London Kurdish Film Festival and other Kurdish art exhibitions and many other Kurdish projects and activities.

Female Community Activist of the Year

Maldin currently works for BBC Arabic. She also teaches Kurdish (Kurmanji) to young and adult students in the Kurdish Communities. She took part in the Kurdish Film Festival as an MC member.

Rebaz started the Croydon Translation Services Ltd in 2012. The company provides services to the language industry. The company's vision over the next five years time is to employ more staff and to open branches in other parts of the UK as well as increasing sale. Although Croydon Translation Services is a profitable company, Rebaz through this company helps Kurdish community in London by providing interpretation services to new Kurdish asylum seekers.

Chiman is a female Kurdish film director, born in Sanandaj, East Kurdistan. A few years after the political unrest in Iran, she was forced to flee Iran. She escaped through Europe to a refugee camp in Germany, before finally being granted political asylum in the UK. Chiman graduated from the London College of Communications in 2000 and received her Master degree from Bournemouth university in 2013. She worked as a reporter for various newspapers and satellite TV stations. She has also worked on radio drama such as ‘Zinar Tower’ for BBC Radio 4, and has worked as freelance writer for plays such as ‘Golem’, produced by the renowned Polyglot theatre company. She has made several short films and many reports and documentaries, notably “Rojin”, “Siza”, “Helana” and "" In memory of Esfahani". Currently, Chiman is in post-production stage for her latest film Keezhol.

Guney is a researcher on Turkey, Kurds & Syria and is a visiting fellow for European Council on Foreign Relations  Middle East and North Africa Programme. He is pursuing a PhD on non-state actors in the Middle East at the University of Cambridge. He has advised the Foreign Affairs Select Committee of the UK Parliament as a Special Adviser on Turkey, works as a political and security consultant and carries out investigative journalism mainly on Turkey, the Kurds and ISIS. As a journalist with the BBC for ten years, he broke numerous top UK and international stories that have been picked up by other domestic and international broadcasters.

Hadis is a Kurdish singer, model and performer. She has been incredibly successful in her work, releasing a new single called “Baran” and also performing in front of over 1000 people at the famous British Kebab Awards in 2017.

Young Entrepreneur of the Year

Ali is originally from Kirkuk, Kurdistan. He currently lives in west London and he runs his own businesses including a restaurant, a barber shop and a bakery among others. He has also worked for the Kurdish community

Kae Kurd is a British-Kurdish stand up comedian who has been nominated for the awards by the Royal Television Society in 2017 and the Chortle Awards in 2016. He performed his show, Kurd Your Enthusiasm at the Edinburgh Festival Fringe 2017 and featured as a guest on the BBC Asian Network and wrote for iNews and TotalPolitics.He is the UK's only professional standup comedian from a Kurdish background.

Peshraw has been instrumental in organizing many seminars, meetings, exhibitions, cultural events, book launches and even raucous parties. This is in addition to the enormous support that he lends individuals in their activities, be it an artist trying to hold an exhibition, a student working on a PhD theses, or a journalist in his stride to establish his corresponding enterprise. But his most enduring efforts went into establishing the very successful media outlet, Kurdish Media, as well as heavily supporting Jini Nwe. He further went on supporting Kurdish newspapers that were published in South Kurdistan, such as Hawlati and Awene.

Janroj is as an editor of the British Sociological Association’s journal Work, Employment and Society and a research fellow at Middlesex University. He received his Ph.D. in Sociology and Communications from Brunel University. He has widely published on migration, globalisation, stateless diaspora, transnational political activism, ethnicity, representation, media, nationalism and ethno-nationalist conflicts. His most recent research focuses on the return mobilities of highly skilled young British-Kurdish people to Kurdistan-Iraq. He is the author of the book entitled, entitled Media, Diaspora and Conflict: Nationalism and Identity amongst Turkish and Kurdish Migrants in Europe and he co-convenor of the Kurdish Migration Conference, organised at Middlesex University.

Bamo is a researcher and lecturer who is about to complete his PhD in international politics. He also has a degree in Law, and a masters in Human Rights Political Science. Bamo has taught at City, University of London, and the University of Manchester. Before academia, Bamo used poetry as a means of expressing life as a child of diaspora growing up in the UK. He has held numerous poetry workshops, and coached many young artists. Bamo has used the insight he has attained from his successes to inspire the next generation. Bamo has guided many Kurds into the University pathway and inspired hundreds of students that he has taught, receiving incredible feedback from students. Bamo has also coached and managed Iraqi and Kurdish football teams in Manchester. Bamo also wrote an article which received critical acclaim regarding the 2005 constitution of Iraq, an area where he has expertise.

Extraordinary Contribution to the Kurdish Cause

Mr Ellwood has been a strong supporter of the Kurds in the region in their fight against terrorist organisation DAESH especially during his time as Parliamentary Under Secretary of State at the Foreign and Commonwealth Office from July 2014 to June 2017.

The Vice-Chair of the All-Party Parliamentary Group on the Kurdistan Region in Iraq, the right honourable Robert Halfon MP has been a tireless advocate for international recognition of the campaigns against Kurds in Anfal and Halabja as genocides, tabling an early day motion on the issue as recently as the 12 of March.

A veteran campaigner for social justice, the right honourable John McDonnell MP has dedicated his life to fighting for disadvantaged peoples, including the Kurdish community, in the UK and abroad.

Lord Glasman was a leading member of the UK delegation to observe the trials of HDP co-chairs Selahattin Demirtas and Figen Yuksekdag in December 2017. A long-standing ally of Britain's Kurdish community, he continues to be an eloquent supporting voice both inside and outside of parliament.

As president of Union Solidarity International, Geoff Shears has played an invaluable role in forging grassroots trade union links between the UK and Kurdistan.