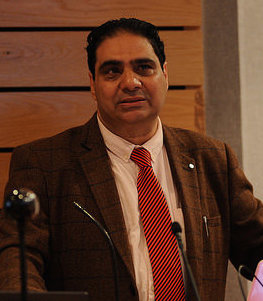 Nadeem Al-Abdalla is a political and cultural expert on Iraq and Manager of the London-based Anglo-Iraqi Studies Centre (AISC), which aims to gather, review and present publications written in English about Iraq and Mesopotamia from the last two centuries . He holds a BA in English Language from Mosul University and an MA in Politics of Education from Plymouth University. He is currently studying for a PhD at Plymouth University.

Nadeem was the official representative of the Iraqi National Congress (INC) in the UK from 2009 to 2015. He published a number of books including ‘Bibliography of English Language Books About Iraq’ (2013), ‘Studies in the Politics of Education’ (2014), ‘100 Years Marking the British Campaign in Mesopotamia (Iraq)’(2014) and ‘Anglo-Iraqi Studies Centre Yearbook 2016’ (2017).