Kurdistan, The international Jihad: “From Ansar Al-Islam to ISIS” 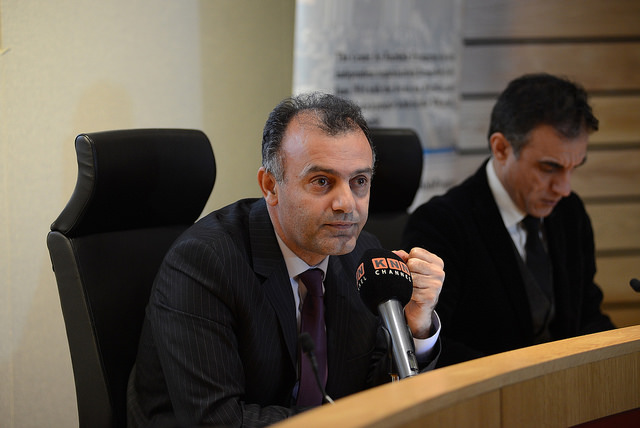 This public forum hosted Dr Bakawan of Europe Office of the Rupture Foundation and Lecturer at the University of Evry as keynote speaker. It was chaired by Dr Burcu Ozcelik of Cambridge University.

Dr Bakawan began by stating that there is at present a demand for a proper and clear definition of "Islamism" and "Jihadism" from various groups. He stated that he would look at these issues from a purely academic perspective without a political view.

He opened his speech stating that he would focus on a third generation of jihadists in the Kurdish region in Iraq as there is already much information available on European-born jihadist from France, Belgium and Germany of which there are around 2000. He also briefly discussed the birth of Islamism in Iraq and its origins in Halabja. He stated that Muhammad Mahmud Sawaf, originally from Mosul, brought Islamism to that area in 1952. He stated that this project of Islamism began with the Iraqisation of Kurdish Islam. He stated that this project which lasted from the 1950s-1980s was to gradually and quietly attempt to Islamise the society by operating from mosques. He stated that during this period there had been no platform for a greater and more global Islamic identity, and that therefore these groups were able to establish a Kurdish/Iraqi Islamic identity. He discussed the emergence of the jihadists of Afghanistan in the 1980s, which gave Kurdish Islamists a role-model to follow.

He stated that through this model, Kurdish Islamists could use it as a tool to reach Kurdish national aims and protect their nation in the Middle East. He added that in 1980, when Saudi Arabia was unable to support these movements, Iran was the main patron of these groups, having established itself after the 1979 Revolution. He continued stating that Kurdish Islamists had tried to take over from other nationalists and leftists between 1980-1996 as the main national figures of the Kurds.

He added that during this period in which a withdrawal of the Saddam Hussein regime from the Kurdish region in Iraq brought both Kurdish leftists/ nationalists and Islamists face to face. He continued arguing that both groups wanted to accommodate the Kurdish cause within their respective ideological leanings and competed with each other to do so. He added that this ultimately led to armed confrontations between either group between 1993-1996, which led to the Islamists' military defeat. He argued that this was devastating to the ideological aspect of the Islamist movement, which ultimately joined and therefore became part the government, forsaking their previous ideological aims, laying down their arms and taking positions in Kurdish government ministries.

He noted however that this move was resented by other Islamist groups elsewhere in the Muslim-majority world. He continued hat as a result of this, 1996-2001 a second generation of Islamist and jihadist groups such as Ansar al-Islam (supporters of Islam) took up this mantle. He stated that this second generation of jihadists were all of the Salafist school of thought.

He mentioned that presently the world is dealing with an international jihadist third generation, the hotspot of which is and will be the Iraqi Kurdish region in future, as various jihadists fleeing the US had come to the Kurdish region after the 2003 US-led invasion of Iraq. He argued that this international group includes groups like Islamic State (IS) and Al-Qaeda, and that it is completed separate and different from the Kurdish nationally orientated groups of the first and second generations. He discussed his own research into Kurdish IS fighters from the Iraqi Kurdish region, which began with the foundation of a data centre. He said that the estimated number of Kurdish jihadists are between 500-2000 at present fighting in IS or Al-Qaeda, and that the data centre had collected a sample of around 157 profiles of individual activist from this number.

His data showed that over half of these jihadists are between 14-30 years old. He also showed that there is a break between this third generation and the other generations because under 5% of these were 40-50 years old. Moreover, he noted that over half of these had no formal education. He stated that this led to the conclusion that a large proportion of these were among the left-behind of society. On the issue of gender, he showed that the vast majority of these jihadists were male. He also noted that a very small proportion of these jihadists were imams or clerics, and that around a third were workers, around a fifth were students and a tenth were housewives.

He emphasised a break between this third generation and the second and first generations, noting that a very small proportion were formally Ansar al-Islam members, which equated the share of other mainstream Kurdish parties, but added that just over a quarter were from Salafist backgrounds, while almost three quarters of them were not ideologically orientated and that many were unable to speak Arabic. On the geography and nationality of this group, he stated that the overwhelming majority were local Kurds and from Sulaymaniah (which is one of the Kurdish region's most developed cities), while just over a tenth were Kurdish but with other European nationalities including Finnish, British and Turkish. He also noted that of these groups, over half are currently in IS-held territories, around a tenth are in the Kurdistan Regional Government's prisons, while little under a tenth have returned to Europe and over a fifth have been killed.

He concluded firstly that many of these fighters came from an excluded and deprived generation chiefly from Sulaymaniyah, which he blamed on the large wealth gap between the highest and lowest echelons of society. He added that manny of these most likely do not believe in any of the mainstream political parties, and therefore also seek some form of meaning in their lives. He also hypothesised that this generation live in isolation from traditional Islam, focus sing on social media and online sources rather than mosques. He also concluded hypothesising that the Salafists among these jihadists are most likely the commanders and higher ranks, while the lower ranks and foot soldiers were most likely not Salafists.

His speech was followed by a question and answer session.

Dr Bakawan is a lecturer at the University of Evry since 2011 and holds a PhD on the Kurdish Islamist movement in Iraq. He is a French-Kurdish sociologist. Dr Bakawan completed his doctoral thesis under the direction of Olivier Roy in 2010. He is also a research associate at the Center for Analysis and Sociological Intervention (CADIS, EHESS-CNRS).