Public Forum 'The Kurdistan Region: A Strategic Ally in a Tough Neighbourhood' 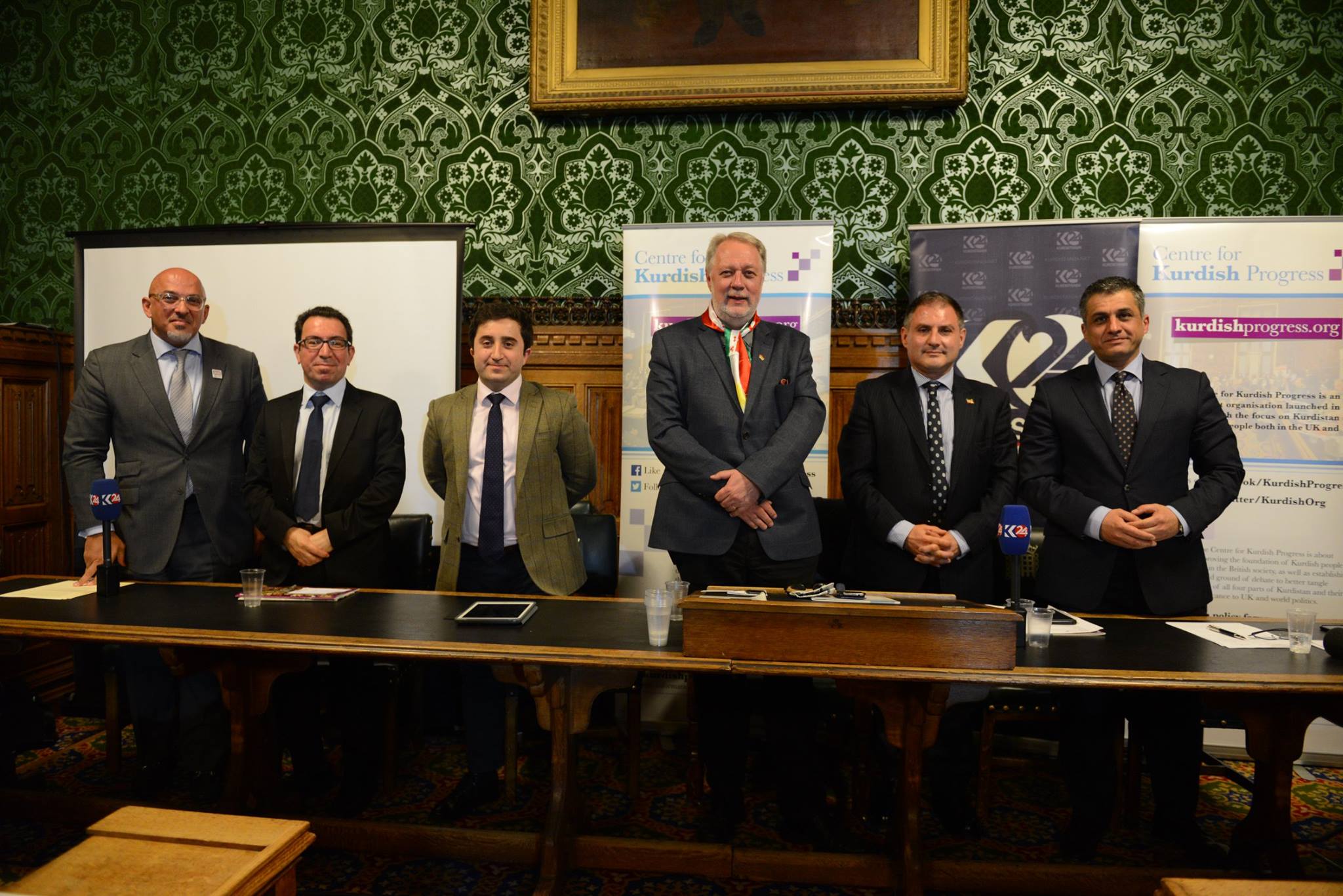 The Centre for Kurdish Progress teamed up with Kurdistan24 for a forum in the House of Commons on the upcoming Kurdistan independence referendum entitled ‘The Kurdistan Region: A Strategic Ally in a Tough Neighbourhood’. The event was well attended with the committee room over-spilling with attendees. It was hosted by Jack Lopresti MP and chaired by Gary Kent, chair of the all-party parliamentary group on Kurdistan. In addition to Lopresti and Kent, it also featured speakers Nadhim Zahawi MP, Karwan Jamal Tahir, Noreldin Waisy and Dr. Ranj Alaaldin.

Chair Gary Kent began the event by asking for a minute silence in memory of the 2,000 Kurdish Peshmerga fighters killed defending their homeland in recent years against the Islamic State. Host and first speaker Jack Lopresti MP kicked-off by drawing a comparison between the UK’S EU referendum last year and the upcoming Kurdistan independence referendum. He also paid tribute to the bravery and sacrifice of the Peshmerga forces.

KRG high representative to the UK Karwan Jamal Tahir followed, outlining how the referendum will determine Erbil’s future relationship with Baghdad. He said that Kurdish people have a right to self-determination, and that this had been encouraged by both Woodrow Wilson and VI Lenin after WWI. Tahir went on to chart the recent history of the Kurds in Iraq, from Halabja to the 2003 US invasion of Iraq, then the Kurdish “honeymoon” with the Iraqi state between 2003 and 2014, and finally the recent impasse.

Noreldin Waisy of Kurdistan24 talked about how the oppression of Kurds predated the formation of the modern Iraqi state. He echoed Tahir’s thoughts about the promise for Kurds in Iraq post-Saddam, saying that exiled Kurdish leaders voluntarily returned to the country to help build a brighter future. He praised the 2005 constitution, but stated that it hadn’t been respected and that this, in addition to extreme budget cuts to the Kurdistan Region (KRI) from central government, had led to the current intractable tensions. Waisy said that Iraq’s borders are “not sacramental” and that the ‘One Iraq’ policy, simply, had failed. He closed by suggesting that the Kurdish issue in Iraq should be of particular importance to the UK given its role in creating what he called an “artificial state” after WWI.

Dr. Ranj Alaaldin argued that the collapse of state institutions across the Middle East had created a new political reality in the region – one that allows Kurds to plot a path to independence from the Iraqi state. He highlighted Ankara’s flexibility with regards to the prospect of independence and that, despite the rhetoric, the Turkish government sees the KRI as not only an economic partner, but also a strong buffer zone for Turkey.

Final speaker Nadhim Zahawi MP spoke of his pride at being the first British MP of Kurdish descent. He called the KRI a “stronghold of liberal democracy” despite all of the regional difficulties it faces and despite the many pressures from the central Iraqi government and jihadists. He noted that the KRI has taken in more internally displaced people than anywhere else in Iraq. Zahawi predicted that regardless of the result of the referendum, the KRI would receive substantial powers through devolution at very least.

In the Q&A, Jack Lopresti MP was asked how the UK government would deal with the situation with regards to its relationship with Turkey if the KRI votes for independence. Lopresti, a Conservative, said that while he is not a spokesman for the government, it should take a position in favour of self-determination, despite potential difficulties with other partners. Karwan Jamal Tahir added that he works with many government officials and that they understand Kurdish aspirations.

Speakers were asked about the issue of Kirkuk’s demographic make-up and minority rights. Tahir said that the city’s security situation has vastly improved since the Iraqi army abandoned the city and the Peshmerga took control. Noreldin Waisy added that a majority of Turkmens support the KRI.

Other issues raised included the positive role of the APPG on Kurdistan, concern about the energy situation in the event of independence, the difficulties of uniting Greater Kurdistan, and issues around corruption in the Iraqi state.

Gary Kent has worked in Parliament for thirty years and for the last ten years has been the Director of the APPG on the Kurdistan Region in Iraq which he has visited 24 times. He is also a weekly columnist for Rudaw and is the Deputy Chair of the European Technology and Training Centre in Erbil. He holds the CKP award for extraordinary contribution to the Kurdish cause.

Jack Lopresti MP is a British Conservative politician. He was elected Member of Parliament for Filton and Bradley Stoke in 2010. He is the Chairman of the APPG on Kurdistan.

Nadhim Zahawi MP is an Iraqi-born Conservative Party politician. He has been the Member of Parliament for Stratford-on-Avon since 2010. He is a Vice-Chair of the All Party Parliamentary Group on the Kurdistan Region, and is a newly elected member of the Foreign Affairs Committee.

Noreldin Waisy is the Founder and General Director of Kurdistan24, an influential Erbil-based Kurdish news station.

Karwan Jamal Tahir is the Kurdistan Regional Government's High Representative to the UK. Prior to his current position, he served as Deputy Minister for the Department of Foreign Relations between 2009 to 2015.

Dr Ranj Alaaldin is a Visiting Fellow at the Brookings Institution in Doha and Associate Fellow at Oxford Research Group (ORG), and Associate Fellow at the International Centre for the Study of Radicalisation and Political Violence (ICSR), King’s College London. He holds a PhD from the London School of Economics and Political Science and his research focuses on intrastate conflict, governance and human security issues. He has conducted extensive research on Kurdish politics, social and economic development in the Kurdistan Region, Shiite militia groups and power-sharing between the federal government in Baghdad and the KRG. Dr Alaaldin was previously a Visiting Scholar at Columbia University and Senior Consultant at the Next Century Foundation (NCF), where he led election monitoring teams in Iraq between 2009-2014 and lead fact-finding missions to Libya (during the 2011 uprising), Turkey, Jordan, Egypt and Lebanon.