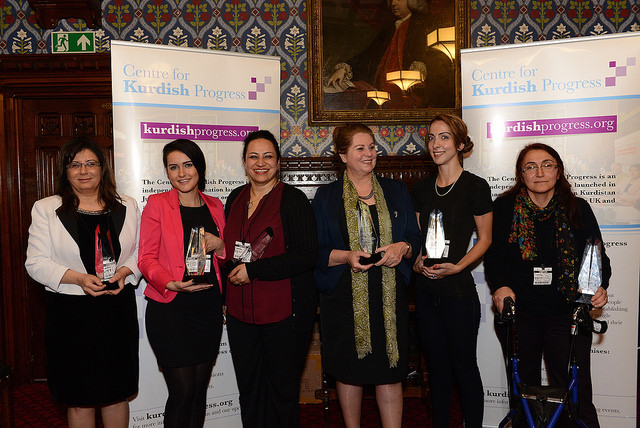 The Centre for Kurdish Progress held its first Women’s Rights and Achievements Reception on 3 November 2015 in the Jubilee Room of the House of Commons. With the attendance of many women and men from the Kurdish community, Members of Parliament including Joan Ryan MP, Baroness Jan Royall, Kate Osamor MP and Siobhain McDonagh MP and London Councillors, the reception celebrated Kurdish women’s achievements.

Host MP of the reception, Joan Ryan Labour MP for Enfield made an opening speech. She emphasised the role of Kurdish women in British society and their role in their countries of origin where, she said, the women took part in defence of their children, freedoms and democracy. She stated that their courage needs recognition especially with regards to fight against ISIS. She added “we need to be the voice of these Kurdish women here in the UK as they are noble fighters against slavery and barbarism”.

Baroness Jan Royall, Kate Osamor MP for Edmonton and Siobhain McDonagh MP for Mitcham and Morden congratulated the Kurdish Progress for organising such an important event and praised Kurdish women for their contributions to British society and their bravery in Rojava, in Kurdistan Regional Government, in Turkey, in Iran and elsewhere.