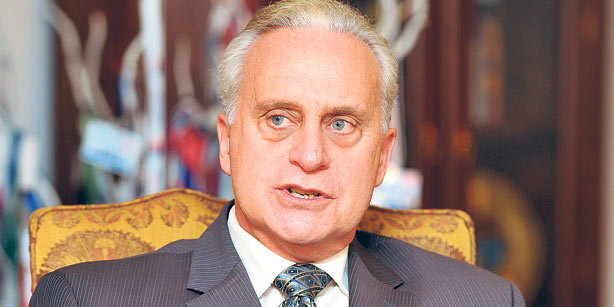 In partnership with Peace in Kurdistan Campaign for a political solution of the Kurdish Question www.peaceinkurdistancampaign.com

PKK leader: Turkey is protecting IS by attacking Kurds

10 August 2015 / BBC News
The man leading the Kurdistan Workers' Party (PKK) has accused Turkey of trying to protect the Islamic State group by attacking Kurdish fighters. Cemil Bayik told the BBC he believed President Recep Tayyip Erdogan wanted IS to succeed to prevent Kurdish gains. Kurdish fighters - among them the PKK - have secured significant victories against IS militants in Syria and Iraq.
But Turkey, like a number of Western countries, considers the PKK a terrorist organisation.

Ricciardone: US support for Turkey’s anti-PKK fight not linked to ISIL

12 August 2015 / Todays Zaman
A former US ambassador to Turkey has argued that claims that the United States and other allies have begun to "turn their eyes" from Turkish airstrikes on the PKK [Kurdistan Workers' Party] because of a recent deal to escalate the fight against an extremist group in Syria is "simply not the case."

11 August 2015 / Amnesty International
Evidence collected by Amnesty International in a fact-finding mission indicates that multiple Turkish government airstrikes killed eight residents and injured at least eight others – including a child - in a flagrantly unlawful attack on the village of Zergele, in the Kandil Mountains in the Kurdistan Region of Iraq.

Number of bodies held at Mürşitpınar increases to 20

11 August 2015 / ANF
Number of the bodies of YPG/YPJ fighters, who died as they were fighting ISIS gangs in Kobanê, held at Urfa’s Mürşitpınar border gate by the Turkish government increased to 20. HDP parliamentarians İbrahim Ayhan and Ferhat Encü who spoke to ANF, emphasized that the number of YPG/YPJ fighters’ bodies held at the border since August 9 had increased to 20, and called for the delivery of bodies immediately.

10 August 2015 / The Morning Star
DAYS ago, the Peace in Kurdistan Campaign’s website was blocked to users in Turkey in the latest government crackdown on Kurdish and pro-Kurdish news and media.
As part of a broad attack on internet freedom, 77 million websites hosted by Wordpress.com were temporarily blocked under Turkey’s Internet Law 5651. After Wordpress challenged the ban, the Turkish government lifted restrictions on the majority of sites, leaving just five — which included peaceinkurdistancampaign.com and four other pro-Kurdish sites — inaccessible inside Turkey. Wordpress’s appeal to the courts regarding our site and the others is still pending.

13 August 2015 / Western Journalism
There are few Western reporters who are still willing to go to the battle fields in Syria since ISIS kidnapped and decapitated several Japanese, American and British journalists. VICE News has made several movies about Islamic State in Iraq and Syria in the past, but now a VICE reporter has made a series of video reports on the war between the Kurdish YPG militia and Islamic State in northern Syria.

Turkey: Journalists gather for peace and speak out against censorship

4 August 2015 / European Federation of Journalists
Since the end of July, media organisations and journalists in Turkey are particularly affected by the growing armed conflict between the Turkish government and the Kurdistan Workers Party (PKK). Access to over 100 news and information websites including major news portals on Kurdish issues such as Dicle News Agency (DIHA),Etkin News Agency (ETHA), Özgür Gündem newspaper and Sendika.org news portal on Turkish trade unionism have been blocked in Turkey by the High Council for Telecommunications (TIB).

14 August 2015 / ANF
Ömer Güney, culprit of the murder of three Kurdish woman revolutionaries, will be put on trial in Paris Special Court of Serious Crimes. The investigation points at the Turkish intelligence agency involvement in the murders. After the completion of the investigation on the murder of PKK founding member Sakine Cansız, KNK Paris Representative Fidan Doğan and youth movement member Leyla Şaylemez on January 9, 2013 in Paris, the case has been sent to the court.

Is Ankara headed toward all-out war with Turkey’s Kurds?

7 August 2015 / Al Monitor
At the time of this writing, gunfire can still be heard in the frontier town of Silopi, which is 10 kilometers (6 miles) north of the Turkey to Iraqi Kurdistan Khabur crossing. The small town with its staunchly pro-Kurdistan Workers Party (PKK) residents is the venue of the latest flare-up between the Turkish security forces and PKK fighters. The skirmishes that took lives from both sides started after nightfall and continued through the next day, Aug. 7.

16 August 2015 / Guardian
A group of women have gathered in the mountain pastures, a large herd of goats swarming around them. Some stir large pots of milk to make yoghurt, others prepare tea. As a missile is launched from a Turkish military outpost in the distance, they do not even look up at the sound.

Fading hopes: Turkey must sort out its Kurdish problem, because it is destroying the most effective weapon against Isis
15 August 2015 / Independent Editorial
Only a few years ago, Turkey was widely regarded as a model for the Middle East: an evolving pluralistic democracy with a robust economy, with an Islamist tinge, to be sure, but whose political stability needed no longer to be underwritten by the military. In foreign policy, it kept a reassuringly low profile, and the gates of the European Union seemed to beckon. Today, alas, that image is little more than a distant memory.

11 August 2015 / Middle East Eye
After more than four years of conflict, Turkey appears to be exploiting the Syrian civil war to gain maximum strategic advantage. Under the cover of a half-hearted anti-Islamic State (IS) drive Turkey hopes to create a buffer zone in northern Syria, in addition to imposing a no-fly zone. Furthermore, Turkey aims at delivering a crushing blow to its old foe, the Kurdistan Workers Party (PKK), with a view to negotiating more favourable peace terms with the broader Kurdish movement.

Inside Syria: Kurds Roll Back ISIS, but Alliances Are Strained

10 August 2015 / New York Times
Green drapes were drawn against the sun, cloaking the room where members of a Syrian Kurdish militia huddled around walkie-talkies, assiduously taking down GPS coordinates. Talal Raman, a 36-year-old Kurdish fighter, worked on a Samsung tablet, annotating a Google Earth map marked with the positions of the deserted apartment buildings and crumbling villas from where his colleagues were battling Islamic State fighters south of this northern Syrian town. He pinpointed in yellow the positions where his men were hunkered behind a wall, and highlighted in red the coordinates of a building next to a mosque where Islamic State fighters had taken cover.

12 August 2015 / Wall Street Journal
Turkey has launched a series of aggressive airstrikes against Kurdish militants but has yet to turn its firepower on Islamic State in Syria as expected, increasing concerns in Washington about the Ankara government’s intentions.

12 August 2015 / New Yorker
On Monday, two members of the Revolutionary People’s Liberation Party-Front, or D.H.K.P.-C, opened fire on the American consulate in Istanbul. No one was killed in the strike, which the D.H.K.P.-C, a Marxist-Leninist group with roots dating to the late seventies, said in a statement was motivated by a new agreement to allow U.S. airplanes to launch strikes on ISIS from a Turkish base near the Syrian border.

Murray Bookchin and the Kurdish resistance

9 August 2015 / RoarMag
The introduction to the new book The Next Revolution: Popular Assemblies and the Promise of Direct Democracy(Verso, 2015), explains how Murray Bookchin – born to Russian Jewish immigrants in New York City in 1921 – was introduced to radical politics at the age of nine when he joined the Young Pioneers, a Communist youth organization. This would be the start of his ‘life on the left’ in which he would turn from Stalinism to Trotskyism in the years running up to World War II before defining himself as an anarchist in the late 1950s and eventually identifying as a ‘communalist’ or ‘libertarian municipalist’ after the introduction of the idea of social ecology.

VIDEO: 26th IWSF - The Effects of War and Islamic Fundamentalism in Kubani and Eyzadi Community

7 August 2015 / Daily Beast
Singled out for genocide by the so-called Islamic State and abandoned by the Iraqi Kurds, young Yazidis on Mount Sinjar in Iraq are flocking to the militias and ideology of a quasi-Marxist group blacklisted as a terrorist organization in the West.
Formed into what they’re calling Sinjar Protection Units, or YBŞ, the Yazidis—both male and female—have sworn to defend their homeland and to avenge ISIS’s campaign of rape, kidnapping, and murder.

ISIS Enshrines a Theology of Rape

13 August 2015 / New York Times
In the moments before he raped the 12-year-old girl, the Islamic State fighter took the time to explain that what he was about to do was not a sin. Because the preteen girl practiced a religion other than Islam, the Quran not only gave him the right to rape her — it condoned and encouraged it, he insisted. He bound her hands and gagged her. Then he knelt beside the bed and prostrated himself in prayer before getting on top of her. When it was over, he knelt to pray again, bookending the rape with acts of religious devotion.

4 August 2015 / VOA
Islamic State fighters did scary things to Sarah Said Haydar. Ultimately, they almost scared her to death.
Sixteen-year-old Sarah was among thousands of Yazidis fleeing an Islamic State onslaught in northern Iraq in August 2014.
The teenager and her extended family made it out of her hometown, Tal Qasab, and were heading toward Mount Sinjar when Sarah, her sister and a cousin were caught.