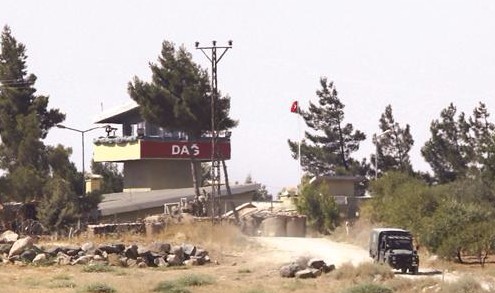 In partnership with Peace in Kurdistan Campaign for a political solution of the Kurdish Question www.peaceinkurdistancampaign.com

Turkey's sudden willingness to join the fight against the Islamic State group is a sign that it's afraid of losing clout with the U.S., but its second front against Kurdish rebels in Iraq on Saturday could complicate Washington's war. For months, Ankara had been reluctant to join the U.S.-led coalition against IS despite gains made by the extremist group on Turkey's doorstep. Now, Turkish warplanes are directly targeting IS locations — the latest bombing run coming early Saturday for a second straight day. Turkey then opened a second front on Kurdish rebel sites.

The leadership of Iraqi Kurdistan Saturday condemned Turkish airstrikes against positions of PKK Kurdish rebels in its autonomous region in the north of Iraq. Kurdish regional President Massud Barzani spoke to Turkish Prime Minister Ahmed Davutoglu on the telephone and "expressed his displeasure with the dangerous level the situation has reached," a statement said.
"He requested that the issue not be escalated to that level because peace is the only way to solve problems and years of negotiations are better than one hour of war," Barzani said in a statement.

Turkish jets struck camps belonging to Kurdish militants in northern Iraq Friday and Saturday in what were the first strikes since a peace deal was announced in 2013. The strikes in Iraq targeted the Kurdistan Workers’ Party, or PKK, whose affiliates have been effective in battling the Islamic State group.

Turkey calls Nato talks on IS and PKK

Turkey has called a special meeting of Nato ambassadors to discuss military operations against the Islamic State (IS) group and PKK Kurdish separatists. The session is to take place in Brussels on Tuesday. Turkey launched air attacks against IS militants in Syria and resumed air raids against PKK camps in northern Iraq following recent attacks. In one attack blamed on IS, 32 people were killed in a suicide bombing near the Syrian border on 20 July.

Why is Qandil being bombed?

There is consensus on the notion that Erdoğan and his team restarted the war process after the Turkish army’s bombardment of Medya Defense Zones on July 25. Hundreds of location where the guerrillas are thought to be were bombed during these attacks. Thousands of civilians live in the areas under bombardments, and many civilians got injured during the attacks.

Turkey, US to create ‘ISIL-free zone’ inside Syria

Turkey and the United States have agreed on a military action plan with the objective of clearing the Turkish-Syrian border of jihadist terrorists in what the two countries have called the Islamic State of Iraq and the Levant (ISIL)-free zone.  This action plan was part of a comprehensive deal between the two allies which has been seen a “a game changer” in the fight against ISIL by the United States administration, whose warplanes will be able to use this region’s most strategic military base in İncirlik as part of its aerial campaign against jihadist positions.

Kurdish militia have expanded their control over portions of a major Syrian city in their fightback against the Islamic State of Iraq and Syria (ISIS), to the detriment of government forces there, a monitor said Saturday. “The Kurdish People's Protection Units (YPG) are advancing in Hasakah city against ISIS and at the expense of the regime,” said Rami Abdel Rahman, head of the Syrian Observatory for Human Rights.

Twitter whistleblower Fuat Avni, who is known for making claims concerning government actions that often come true, has said that President Recep Tayyip Erdoğan is behind last Monday's deadly suicide attack in Suruç, alleging that Erdoğan's intention is to sow chaos in society to pave the way for the Justice and Development Party (AK Party) to come to power as a single party in an early election.

Solidarity targeted by IS bomber

In response to the call of the Federation of Socialist Youth Associations, hundreds of young men and women have joined the campaign to rebuild war-devastated Kobanê in Syria, whose slogan is: “We defended together. We will rebuild together.” Especially inspired by the participation of young Kurdish women, they were internationalists supporting the revolution taking place in Rojava (the Kurdish lands in northern Syria) and displaying international solidarity with the just cause of the Kurds.

All that was left at the site of the suicide bombing July 20 in Suruc, Turkey, were some personal belongings, partial human remains and one national identification card in the name of university student Seyh Abdurrahman Alagoz of Adiyaman.  Using DNA, authorities have identified Alagoz as the perpetrator of the attack that killed more than 30 people and injured about 100

A prosecutor's office in Paris has accused Turkey's National Intelligence Organization (MİT) of involvement in the assassination of three senior female members of the outlawed Kurdistan Workers' Party (PKK) in Paris in 2013, according to an indictment published by the Le Monde newspaper.

Nine years ago, Zind Ruken packed a bag and left her majority-ethnic-Kurdish city in Iran, escaping a brutal police crackdown and pressure to marry a man she’d never met. Now the 24-year-old is a battle-hardened guerrilla, using machine guns and rocket-propelled grenades to fight Islamic State extremists in Syria and Iraq.

Turkey conflict with Kurds: Was approving air strikes against the PKK America's worst error in the Middle East since the Iraq War?

Kurdish guerrillas have killed two Turkish soldiers in an ambush in south-east Turkey as fighting resumes between Turkish security forces and Kurdish militants, ending a two-year-old ceasefire. The attack came after Turkish aircraft heavily bombed bases of the Kurdistan Workers Party (PKK) in the Qandil Mountains in northern Iraq.

When this column reported in October that we might be witnessing Turkish President Recep Tayyip Erdogan’s “slow turnaround on foreign fighters in Syria,” we did not anticipate it would be this slow.
Erdogan has faced pressure and criticism for holding back in the battle against the Islamic State (IS) and for Turkey’s at best episodic approach to dealing with foreign jihadi fighters transiting Turkey en route to Syria.