Kurdish Groups and the Future of Syria 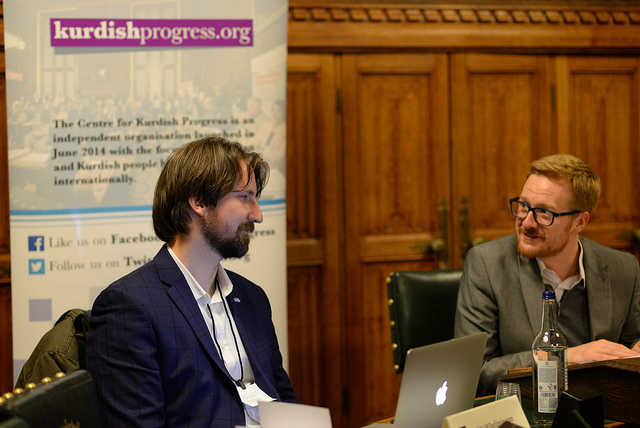 On Wednesday December 19 the Centre for Kurdish Progress hosted Mr Wladimir van Wilgenburg, esteemed journalist and long-time resident of Erbil to discuss Kurdish groups and the future of Syria. The event took place in Committee Room 8, Houses of Parliament, and was kindly hosted and chaired by Lloyd Russell-Moyle, Labour Co-operative MP for Brighton Kemptown.

Mr Russell-Moyle introduced the debate on the future of Kurdish groups in Syria to a packed audience in Committee Room 8 on Wednesday 19 December. Having been part of a parliamentary delegation to north-eastern Syria earlier in 2018, Mr Russell-Moyle noted that the forthcoming delegation organised by the APPG on the Kurdish Regions had been delayed due to Brexit. However, a commitment will be made to return as soon as possible.

Wladimir van Wilgenburg began his talk by addressing the nature of governance in north-eastern Syria. Firstly, he noted that contrary to the widespread belief that there is a federal system in place, they are in fact moving toward establishing an autonomous administration of the north and east of Syria. What was understood as ‘Rojava’  - the Kurdish areas of Syria – is now more correctly termed ‘the north-east of Syria’, as Kurds, Arabs and other minorities build a shared system of governance. This year, argued van Wilgenburg, positive moves have been made away from the ethnicity-based system and toward one more in line with the confederalist ideology, largely made possible by US military support in the region.

Van Wilgenburg argued that a fair comparison of the system would be to surrounding areas such as the rest of Syria and Turkey’s predominantly Kurdish south-eastern region, rather than to the West. Unlike Turkey’s southeast, north-eastern Syria has been accessible to journalists, including those critical of the Democratic Union Party (PYD) and NGOs.

Democratic freedoms are by no means fully fledged, argued van Wilgenburg, but in development. Important progress has been made toward tolerance of and freedoms for religious minorities, equality for women, and tackling corruption. This progress and relative stability is due, in part, to the SDF’s unified command structure. This, van Wilgenburg noted, is what has made them useful US allies – there has been no infighting or splintering.

The efficacy of the Kurdish-led coalition of militias known as the Syrian Democratic Forces (SDF) is demonstrated by the safety with which Western journalists have been able to visit the area. Van Wilgenburg also credited the unified command structure with the effective management of corruption, standing in stark contrast to corruption issues in the rest of the region. The recruitment of Arab locals to police even Kurdish-majority towns demonstrates the far-reaching integration efforts, as does the presence of Arabs fighting Islamic State (ISIS) on the front line in Hajin in the Deir ez-Zor province.

Also helping to drive the pluralistic system, explained van Wilgenburg, are conscription and education. While controversial, conscription has helped ensure participation in the system across different minority groups. Pro-regime schools have been closed down and replaced with schools which provide education in Kurdish, Arabic and Syriac.

Women are actively involved in both the political administration and the security forces of north and eastern Syria. The co-chair system has meant there are female leaders in all parts of the administration, while the all-female Women’s Protection Units are involved in the front-line fight against ISIS. Polygamy and child marriage have been banned in the Kurdish majority areas, though in Arab majority, the administration has resisted imposing such bans, so as not to cause resentment amongst the more conservative Arab residents.

Similarly, issues of religious freedoms are often overlooked, argued van Wilgenburg. Christian converts lived freely in Afrin alongside Alawites and Yezidis, though they have mostly fled since the Turkish invasion in January. Religious freedom now only remains in the North and East of Syria.

Turning to Turkey’s policies in Syria, van Wilgenburg noted that Turkey’s attempts to prevent the Kurds from forming a land corridor on its border were unsuccessful as the Kurds became the US’ major partner in the fight against ISIS in 2015.  The Turkish-supported rebels were not unified and were linked to al-Qaeda, al-Nusra and ISIS in fighting the regime.

Turkey has been desperate to prevent the formation of a unified Kurdish territory on its border, fearing repercussions in its own majority-Kurdish south-eastern region. Both the Euphrates Shield operation in August 2016 and Operation Olive Branch launched in January this year in cooperation with Russia were efforts to obstruct the creation of the land corridor. Turkey only began fighting ISIS in August 2016, argued van Wilgenburg, when it became clear that if they did not, the Kurds would create a land-corridor as they captured previously ISIS-held areas. Even recently, van Wilgenburg said, there has been cooperation between Turkey and al-Qaeda, with the al-Qaeda-linked al-Nusra Front escorting Turkish forces to their observation points in Idlib. A report by Dutch intelligence said that ISIS and al-Qaeda have been able to reorganise in Turkey as Turkey focuses all its efforts on the PKK.

The final section of van Wilgenburg’s talk focused on the announcement on 19 December, that the US would withdraw from Syria. President Trump tweeted “We have defeated ISIS in Syria, my only reason for being there during the Trump Presidency.”

After taking control of Afrin in March 2018, Turkey has been planning to attack Tell Abyad, to split the central area between the Kobani and Jazira cantons. Recently, Turkey’s President Erdoğan has been ratcheting up his rhetoric, suggesting an imminent invasion. The US had warned they would not allow Turkish-backed rebels to attack the SDF, which are entwined with US troops. Trump’s tweet on 19 December thus represented a significant U-turn. van Wilgenburg posited that this was not a decision made by the State Department or by the Pentagon, by Trump for a domestic audience.

Envoy James Jeffrey had said the US would stay in Syria until there was a working Geneva Process and until Iranian forces have left. Furthermore, van Wilgenburg explained, Mr Jeffrey wanted to use the north-east of Syria as leverage against the Assad regime, by withholding its rich agricultural and hydrocarbon resources to force Assad to the negotiating table. The US army learnt harsh lessons from ISIS’s growth in the aftermath of the invasion of Iraq and are wary about early withdrawal.

This, van Wilgenburg predicted that the newly-announced US plan to pull out in 60 to 100 days would lead to significant displacement of civilians living in Kobani, Jazira and Hasaka, if Turkey and/or the Syrian regime attack. This could create a new refugee crisis for the Kurdistan Regional Government (KRG) which is already hosting some 1 million internally displaced peoples and refugees in Iraqi Kurdistan.

The only way for the north-east of Syria to survive, posited van Wilgenburg, is for France, Jordan, the UAE and Saudi Arabia to stop a Turkish or regime advance on the area. Alternatively, the Kurds could make a deal with the Syrian regime to put forces on the border, but full control of the area would almost certainly be demanded in return.

Van Wilgenburg said he was not optimistic about the future of Syria’s north-east if the US withdraws. The progress toward civil liberties would be under threat. The ensuing chaos would be to the benefit of Russia, Iran, and Turkey, would negate the West’s existing leverage and create a new refugee crisis. ISIS is still not defeated, and van Wilgenburg questioned the likelihood of the SDF continuing to fight ISIS in Hajin in the knowledge that the US will pull out within 100 days.

Finally, van Wilgenburg also noted the risk posed to the Iraqi Kurds by the planned withdrawal. Turkey and Iraq may look to take control of Faysh Khabur to create a land corridor between Turkey and Iraq. This would enable Turkey and Iraq to bypass the KRG in trade – particularly oil and gas. After the 2007 Iraqi Kurdistan independence referendum, the US prevented the Iraqi army from moving on Faysh Khabur as it has been a military and aid hub for north-eastern Syria. Now, explained van Wilgenburg, the area is again vulnerable.