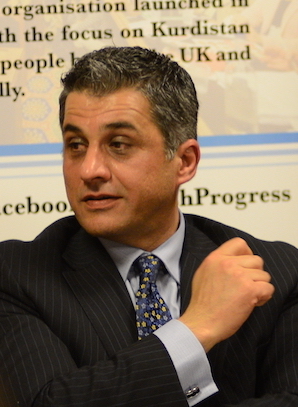 His Excellency Karwan Jamal Tahir is Kurdistan Regional Government (KRG) High Representative to the United Kingdom. He joined the Patriotic Union of Kurdistan (PUK) in 1991, becoming a member of His Excellency Jalal Talabani’s, Special Bureau. He continued to work in a number of departments within the PUK until 1998, when he travelled to the United Kingdom for his undergraduate studies. On July 2003 he completed his BSc in Computer Science and Management, at the University of Manchester Science and Technology (UMIST). Mr.Tahir served as an Adviser to the General Enterprise for Special Projects, at the Kurdistan Regional Government’s Council of Ministers, from 2004 to 2007. Prior to his appointment as the Deputy Minister, for the Department of Foreign Relations in 2009 to 2015, Mr Tahir served as a Senior Adviser, to the Minister of Natural Resources for two years. He played a pivotal role in the Ministry of Natural Resources strategic plans and relations with the IOCs.

As well as leading three Management Committees, while participating as a member in many more. During his tenure as the Deputy Minister, of the Department of Foreign Relations, Mr Tahir promoted the Kurdistan Region’s relations with the international community on a political and cultural level, through participating in numerous conferences around the world and engaging with the diplomatic community in Erbil. On June 2015, Mr. Tahir was appointed as the Kurdistan Regional Government’s High Representative to the United Kingdom. He endeavour’s to further strengthen bilateral relations between the KRG and the United Kingdom’s government, think-tanks, NGOs, educational institutions, with cultural and trade organisations.