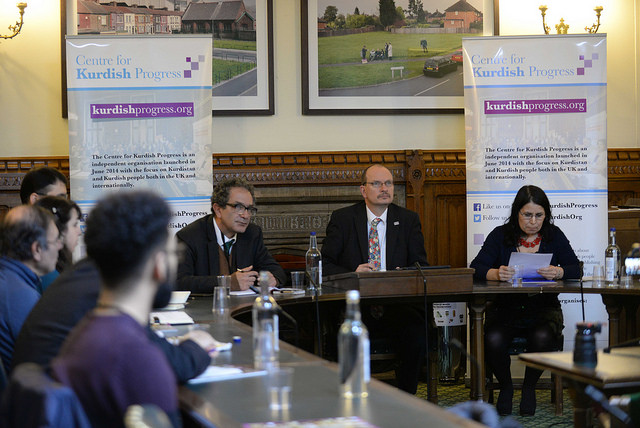 On Tuesday November 27 the Centre for Kurdish Progress hosted Mr Zardasht Hawrami, member of the EU and UK committee of the East Kurdistan Free and Democratic Society (KODAR); Miss Mehri Rezai of the Kurdish National Congress (KNK); and Mr Simako Rashidi, central committee member of the Kurdistan Free Life Party (PJAK), to discuss the causes and potential consequences of the violence playing out in Iranian Kurdistan. The event took place in Committee Room 21, Houses of Parliament, and was kindly hosted and chaired by Sandy Martin, Labour MP for Ipswich and Labour Peer Lord Glasman.

A selection of photos can be found here.

Mr Martin began the event by introducing the speakers and his role as chair of the All Parliamentary Party Group (APPG) for the Kurdish Region in Iran. Lord Glasman outlined the APPG’s intention to draw the British government’s attention to the plight of Iranian Kurds and the situation in Iranian Kurdistan. In order to achieve this, the APPG aims to collect relevant and impartial facts and information pertaining to Kurdish community in Iran, but also other minority groups, and to create a permanent parliamentary record of events.  Secondarily, the APPG will aim to make representations to the government in a non-partisan, all party manner.

Ms Mehri Rezai of the Kurdish National Congress spoke first. Ms Rezai began by outlining the human rights restrictions suffered by Iranians and Iranian Kurds since the 1979 Islamic revolution. Ms Rezai explained that in light of the reinstatement of US sanctions on Iran and building economic crisis, the Islamic Republic is now increasing pressure on the Kurdish people, predominantly in northwest Iran. In demonstration of the recent escalation of violence, Ms Rezai noted the following attacks on Iranian Kurdish groups: on August 25, 2018 four Kurdish environmental activists were killed while trying to extinguish a fire, allegedly by the Islamic Revolutionary Guard Corps (IRGC); on September 7 Iranian forces killed four members of KODAR; three Kurdish political prisoners were executed; several missiles were fired at the headquarters of the Kurdistan Democratic Party of Iran (KDP-I) in Iraqi Kurdistan while the party central committee was holding a meeting and five members of central committee were killed. In response, on September 12 the Kurdish people gathered for a peaceful demonstration, declaring that the Iranian regime cannot justify opposing the rights of Kurdish people to engage in political activity in opposition to the regime.

Ms Rezai argued that the Kurdish people have the right to decide on a form of national self-determination, which could take the form of autonomy, federalism or confederalism. The Kurdish movement, she noted, is not a separatist one. They do, however, demand their right to democratic autonomy and unity between the Kurds of Iran, Turkey, Syria and Iraq. To this end, the Iranian constitution must be changed in order to recognise the diversity of its peoples. However, the democratisation of the constitution is itself not sufficient for a democratic transformation, society must bring about its own change. It is not society that has to change and submit to the logic of the state but the state has to submit to the demands of society and the people’s demands for human rights. The democratisation of Iran is not only the responsibility of the government, Ms Mehri argued, it requires the input society, people, women and intellectuals.

Mr Zardasht Hawrami, speaking next, outlined KODAR’s roadmap for a democratic solution to the Iranian Kurdish question. KODAR believes that regime change in Iran will not be achieved by the actions of a single party or set of parties.  Rather, a new social system is required which can recognise and accommodate the cultural, linguistic, and religious richness and diversity of the Eastern Kurdistan region. A democratic self-governance framework, within which women would play a key role, could represent a substitute for the nation-state system. The current centralised system, argued Mr Hawrami, privileges one ethnicity and language, and the concentration of power encourages dictatorship. KODAR proposed a confederated system of self-governing communes that together share the management of society.

Finally, Mr Simako Rashidi of the Kurdistan Free Life Party discussed the growing opposition to the current Iranian regime. Mr Rashidi noted that growing social awareness within Iran, in conjunction with increasingly harsh state responses to protest and dissent has led to the deepening of discontent. People are increasingly being denied freedoms, and see wealth being concentration within the elite. The Iranian state has sought to combat this internal dissent with a policy of ‘enemy making’. By taking a hostile attitude toward the US and Israel, argued Mr Rashidi, the regime seeks both to frighten citizens into unity with the threat of external enemies, and to delegitimise internal dissent by association with foreign governments. However, the people are continuing to demand their rights to expression and to dissent. This is best expressed most recently by the multi-stage general strikes launched by truck drives in Iran and the general strikes across Kurdistan in protest against the execution of Kurdish youths. In the face of this, the Iranian government will ultimately have no choice but to accept the peoples’ demands and recognise their right to protest and the rights of minority groups.