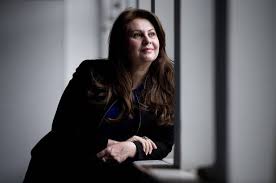 Diana Nammi is a campaigner from Kurdistan-Iran. She opposed the Islamic Republic of Iran which imposes Sharia law on Iranian people and violates the rights of women and children. Diana led many campaigns fighting for justice in a society based on human rights, freedom and equality. She spent 12 years on the frontline as a Peshmerga (Kurdish freedom fighter) but eventually her activism in Kurdistan Iran and neighboring countries resulted in her facing persecution, which forced her to flee. She now lives in the UK.

In 2002 Diana established the Iranian and Kurdish Women’s Rights Organisation (IKWRO), a UK registered charity which provides advice and support to Iranian, Kurdish, Arab, Turkish and Afghan women who are affected by “honour” killing and ‘honour’ based violence, forced marriage, FGM and domestic violence.
Diana has set up “stop honour killings” campaign and in 2003 she founded the International Campaign against Honour Killingswhich successfully managed to take world attention to “honour” based violence as a form of violence against women mainly. IKWRO has become a leading organisation for many campaigns in the UK and internationally including campaign against “honour” killings.
In 2011, Diana established the True Honour Award, an annual award ceremony, in memory of all victims of ‘honour’ killings and in recognition of outstanding work of individual and organisations who prevent ‘honour’ based violence, protect victims and bring perpetrators to justice.
Diana’s work has received national and international recognition. She has become a very well-known public speaker on violence against women and in particular “honour” Based Violence, forced marriage, child marriage and FGM and been interviewed by national and international media . She is regularly asked to deliver training for professionals and to give presentations at conferences and meetings. Her organisation, IKWRO won the ‘Rising Star award’ by the Lilith Project (Eaves Housing) for the Best New Voluntary Sector Organisation in 2006. Diana Nammi’s unremitting work was alsorecognized by Eve magazine who awarded her the Eve honour in December 2007. In 2012 Diana Nammi has been named on a list of150 women who shake the world by Newsweek and The Daily Beast in “Women in the World Summit” - to honour women activists and the growing network of powerful women who support their efforts. In 2014, Diana received the Special Women on the Move Award by UNHCR, The Forum and Migrant Rights Network. She was then honoured with the UK’s Woman of the Year Award and also named as 100 women of the year by BBC World Service.