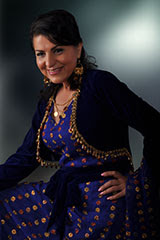 Della was born in the Kurdistan region of Iraq. She works as an image consultant and fashion designer in the UK. She has organised many fashion shows with the collaborations of museums such as the world famous V & A, the Museum of London and the British Museum, as well as runway shows in other countries including Netherlands, Germany, Dubai and Kurdistan. Her designs are improvisations on traditional Kurdish styles.

Della was awarded the Millennium Award by then the Mayor of London Ken Livingston for her work and contributions to the British and Kurdish community in UK. She also promotes Kurdish food through her organisation, Della's Kitchen. Della is also the artistic director for GULAN, a British charity that promotes Kurdish culture and art.