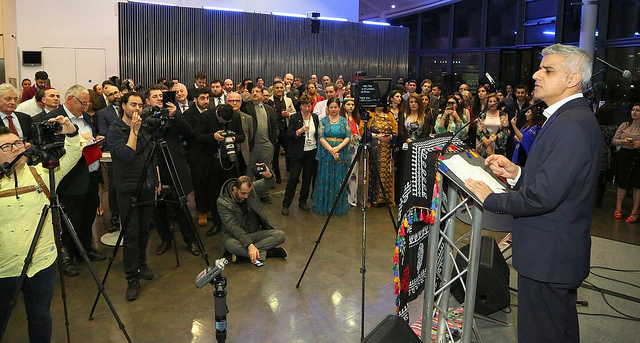 On Friday the 8th of March, the Centre for Kurdish Progress and the Kurdish People’s Democratic Assembly of Britain held a reception in the London Living Room of City Hall to mark Newroz – traditionally celebrated by Kurds as the beginning of spring and the start of a new year.

The event was kindly hosted by Mayor of London Sadiq Khan, who addressed the packed room. Mr Khan welcomed Londoners of Kurdish descent to City Hall, saying “this is your City Hall”. “Here in London,” the Mayor continued, “we don't simply tolerate different cultures, we respect them, we embrace them, and we celebrate them”.

The Mayor of London was introduced by Ibrahim Dogus, founder of the Centre for Kurdish Progress, who thanked the Mayor for being “a true friend of the Kurdish people”. Mr Dogus commended the contributions of the British Kurdish community and called upon the British government to support the struggles of Kurds abroad. Speeches were also given by co-chair of the Kurdish People’s Assembly in Britain Besime Basar and Director of Kurdish People’s Assembly Turkan Budak, who, speaking on International Women’s Day, drew attention to the central role played by Kurdish women in the struggles for freedom and democracy taking place across the region. Also in attendance was Deputy Mayor for Social Integration Dr Debbie Debbie Weekes-Bernard, Mayor of Hackney Phil Glanville, and London Assembly Member Nicky Gavron.

Guests were welcomed by Kasha Bajor on the guitar and the event was concluded by Dr Peyman Haydarian playing the santur and daf, alongside singer Khashayar Baqeri and Kourosh Kouchakpour on the tonbak.