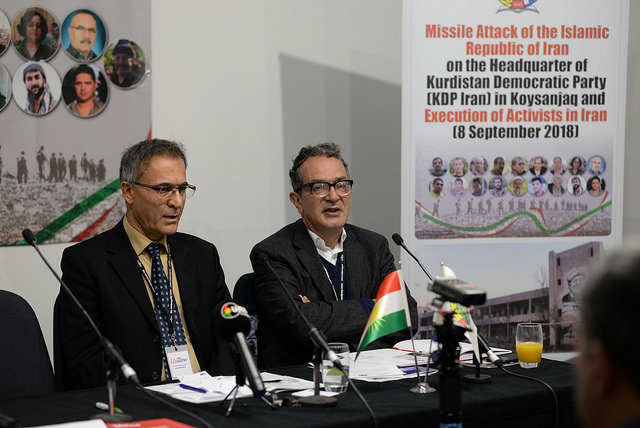 The Centre for Kurdish Progress hosted the Kurdistan Democratic Party - Iran (KDPI) at Labour Party Conference 2018 for a discussion on the Iranian missile strikes targeting the party and other recent developments.

Lord Glasman introduced the ensuing talk by Khalid Azizi, leading member of the Kurdistan Democratic Party (Iran), by denouncing the Iranian attack on the KDPI headquarters in Iraqi Kurdistan. Mr Azizi began by explaining that the KDPI has always been committed to a peaceful and democratic solution to the Kurdish question in Iran. When Iranian missiles hit the KDPI headquarters on September 8 and killed 14 people, the party’s central committee was holding its seasonal meeting, in a civil compound populated by women’s, children’s, and health-related civil society organisations. This was the first time since the Iran-Iraq War that Iran had used to surface-to-surface missiles, and they had chosen to use the missiles in an attempt to demonstrate to the United States that they are a regional superpower that has the capability to send missiles to almost any part of the Middle East.

Mr Azizi warned that the international community needed to unite in opposition to Iranian aggression in the region. Iran is facing a confluence of social and economic crises and has no peaceful, democratic solutions to the nation’s problems. In the face of this, Iran is pursuing a policy of sewing chaos and terror outside of its borders, he argued, and will construe the ensuing destabilisation and war as unprovoked aggression toward the Iranian people, against which only the Islamic regime of Iran can protect them. Mr Azizi concluded by saying that the Kurds’ struggle for a peaceful and democratic solution will continue until their ethnic, national and democratic rights are respected.