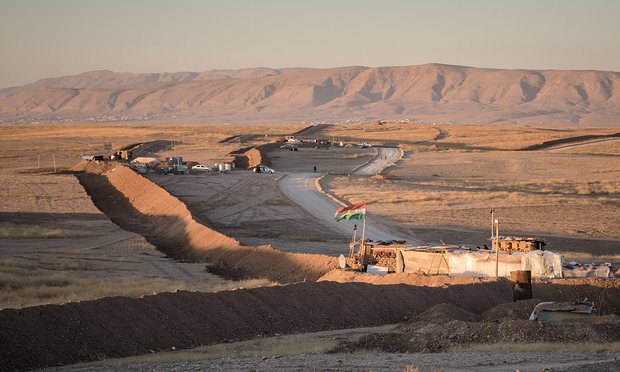 Since the Peshmerga drove back Islamic State’s (IS) initial assaults in 2014, these Kurdish forces have been effectively expanding the Kurdistan Region of Iraq’s (KRI) territory by changing facts on the ground. Human Rights Watch and others have accused Peshmerga of forcing out non-Kurds from areas taken. Now, with the construction of a trench system running across Northern Iraq, the KRI appears to be making a permanent claim to the territory it has moved into. By some estimates, this expansion would increase the size of the KRI by 40%. The trench system takes in territory from the Syrian to the Iranian border, including Sinjar and Kirkuk, as well as oil fields.

In addition, Baghdad has recently set up customs stations, in the form of checkpoints, on roads leaving the KRI entering into the rest of Iraq. This is amid claims from Baghdad that Erbil is not sharing revenues on tariffs collected at its borders, particularly with Turkey. Consequently, imports via freight from Turkey to Iraq are often being charged twice, which has reportedly caused a significant downturn in trade. This move, as well as damaging business, will further serve to create distance between Baghdad and Erbil, and will benefit Kurdish politicians campaigning for independence. Setting up checkpoints may inadvertently add legitimacy to the KRI’s territorial claims.

Moreover, this will be seen as ‘yet another’ issue between Baghdad and Erbil and could add to the difficulties anticipated for after the defeat of IS. These developments point to the weak rule of law in Iraq. The country’s judiciary is weak and this allows for incoherent interpretations of the constitution and a lack of formality in federal arrangements. These gaps exacerbate Erbil’s rocky relationship with the central government.

Politicians in Baghdad may have been motivated to set up the check points as a means to punish Erbil, either for the establishment of the trench system or the Kurdistan Democratic Party’s (KDP) closeness to Turkey. The move makes importing from Turkey less advantageous and benefits Iran, as Iranian imports take the place of Turkish ones in areas of Iraq under central government control. For this reason, there have been suggestions that Iran pressured Baghdad into taking the move. Similarly, this move may add to tensions between the KRI’s Patriotic Union of Kurdistan (PUK) and the KDP, as the two parties navigate international alignments.

Sinjar may prove to be a flashpoint in these tensions. The KDP has been increasingly adamant that it would like to control Sinjar and Turkey has pushed for this as well, fearing the spreading of PKK influence (see our earlier briefing on the subject). Iran, which to a large extent backs Baghdad, would likely prefer Sinjar to be under central government control, as would many politicians in Baghdad. Consequently, there is speculation that Baghdad could seek to support Yazidi groups against Erbil in order to disrupt KRI territorial expansion. In any case, the formalised expansion of Kurdish territory will be certain to escalate tensions between Baghdad and Erbil. Moreover, the longer the nature of the federal structure of Iraq remains unclear, the more damage will be done to the economy of the entire country.

For more analysis and briefings on Kurdish issues, please contactevent@kurdishprogress.org