Briefing on clashes in Sinjar 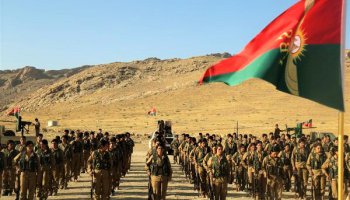 With clashes in Sinjar between PKK and forces loyal to the KDP, and PUK forces making moves in Kirkuk, the spectre of internal conflict in the KRI raises its head.

Clashes have taken place over the last week between KDP-aligned Peshmerga on the one hand and PKK-aligned Yazidi forces on the other in majority-Yazidi Sinjar, leaving several dead. The KDP-aligned Peshmerga are not particularly popular in Sinjar. Many Yazidis believe that when Islamic State attacked Sinjar in 2014, forces loyal to the KDP abandoned them to the group, whereas PKK-aligned forces defended them. Due to this perception, the PKK enjoys greater popularity in the area than the KDP. The PKK, despite calls from Erbil, has been increasing its presence in the area, in the name of ensuring the security of the local population. The KDP is under pressure from Turkey to remove the PKK, in conflict with Turkey, concerned that the group is expanding its influence.

The PKK and the PKK-trained Sinjar Resistance Units (YBS) claim that the KDP Peshmerga initiated the clashes. In line with this version of events, the pressure from Turkey, and KRI President Masoud Barzani’s recent visit to Ankara, would explain why the clashes took place now. Pro-PKK commentators have claimed that the attacking units were actually Rojava Peshmerga, KDP-aligned units intended for use in Syria, which some claim are funded by Turkey. The commanders of the forces involved in the clashes say that PKK and YBS units prevented their entry to the area which they were simply crossing through in order to reach the Syrian border and attacked them.

Since the incident took place, there have been protests in several parts of the KRI, leading to violent police crackdowns. The clashes worsen already mounting tensions between different Kurdish factions. There is considerable public support for the PKK and sympathy for the Yezidi population in the KRI. The claim that KDP-aligned Peshmerga abandoned their posts during the Islamic State assault on Sinjar and that the PKK stepped in has cost the KDP politically. Moreover, last year saw regular protests by opposition movements against President Barzani’s rule. There is a growing divide within the Kurdistan Regional Government between the KDP and the opposition movements.

The two largest other movements, the Patriotic Union of Kurdistan and the Gorran (Change) Movement, last year came together in political opposition to the KDP. Before this the PUK was allied with the KDP but the two were once engaged in a bloody internal conflict in the KRI. Complicating matters is the fact that the PUK and Gorran are seen as closer or at least sympathetic towards the PKK, and this can certainly be said for segments of its support base. Many among its supporters have protested President Barzani’s rule and some of those same the recent clashes in Sinjar, meeting sometimes violent police responses. Moreover, the PUK has its own Peshmerga forces. These have also been active this past week, moving to capture oil fields in the Kirkuk region, possibly seeking to expand its influence. The existence and activity of the PUK Peshmerga remind us of the combustibility of the situation in the KRI.

The Syrian Kurdish force, the People’s Protection Units (YPG), is digging in against a Turkish assault in Syria, and Turkey is pressuring Erbil and Baghdad to oust the PKK from any Iraqi territory. At the same time, Iran has been seeking to increase its influence among Kurdish groups across the region. Sinjar is a strategically significant region for both countries. This tension between Iran and Turkey informs the clashes but is not the sole driving force. Adding to the combustibility, against the backdrop of the struggle against Islamic State, the various Peshmerga forces, particularly the KDP-aligned groups, have received better weaponry and training from foreign powers, likely making them more effective than before. Fortunately, on all sides there are voices calling for de-escalation and a resumption of cooperation.

Please do not reproduce without accreditation