Book Launch ‘Blood Oil: Tyrants, Violence, and the Rules That Run the World’ 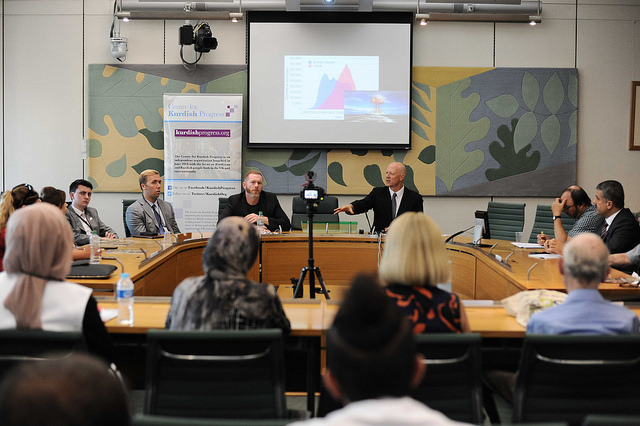 The event was kindly hosted by Chris Hazzard, Sinn Fein MP for South Down.

Mr Hazzard opened the event by briefly thanking Kurdish Progress for holding the event and emphasising that blood oil was an issue of great importance.

Professor Wenar began by stating that, as consumers of oil, we are forced to send money to dangerous people who control the resource. He highlighted the link between authoritarian or failed states and oil, noting that the countries with the most corrupt governments, the most refugees and the most hunger were oil states. Professor Wenar attributed this to the ‘oil curse’, a manifestation of the Law of Effectiveness, perhaps more commonly known as ‘might makes right’. This is a deep seated rule left over from the days of the Atlantic slave trade, whereby whoever has the power to control resources has the right to sell them. For example, when so- called IS seized control of Iraqi oil fields in 2014, they were able to sell this oil, thus providing them with a huge stream of revenue.

Professor Wenar believes that the oil curse stems from the fact that oil is linked to unaccountable power, as whoever controls these ‘holes in the ground’ has access to a huge revenue stream with no strings attached.

Professor  Wenar also touched on how oil has cursed the West, showing how the threats and crises that the West has faced over the past 40 years were linked to oil. These oil related threats were as current as so-called IS, and as historic as the USSR.

He suggested that the combination of climate change and ever-younger populations in oil states had the potential to worsen the oil curse, as popular discontent leads to greater authoritarianism.

Nevertheless, Professor Wenar concluded on a note of optimism. He argued that the world already has an alternative to the Law of Effectiveness, namely the notion that a country belongs to its people. Treaties already exist to implement the statement ‘the oil belongs to its people’, and the idea of the need for accountability is already widespread.

While some could argue that this alternative is just on the ideas level, Professor Wenar stressed that the Law of Effectiveness has been abolished before, for example the slave trade, and more recently with blood diamonds, and reiterated that he is ‘tremendously optimistic’ that it can be abolished with regards to blood oil.

Professor Wenar concluded his talk by highlighting the work of his NGO Clean Trade, which encourages governments gradually and responsibly to change laws regarding blood oil. He also noted that the UK purchases 15% of its oil from authoritarian states, and that it would be perfectly possible to stop buying from these regimes.

The talk was followed by an engaging discussion.

Leif Wenar holds the Chair of Philosophy & Law at King’s College London. After earning his Bachelor’s degree from Stanford, he went to Harvard to study with John Rawls, and wrote his doctoral thesis on property rights with Robert Nozick. A British citizen, he has lived in the UK since 1997. He has been William H. Bonsall Visiting Professor in the Stanford Philosophy Department; a Visiting Professor at the Stanford University Center on Ethics in Society; a Visiting Professor at the Princeton Department of Politics and the Princeton University Center for Human Values; a Visiting Fellow at the Australian National University School of Philosophy; a Fellow of the Center for Ethics and Public Affairs at The Murphy Institute of Political Economy, and a Fellow of the Program on Justice and the World Economy at The Carnegie Council on Ethics and International Affairs. His cv can be found at www.wenar.info.