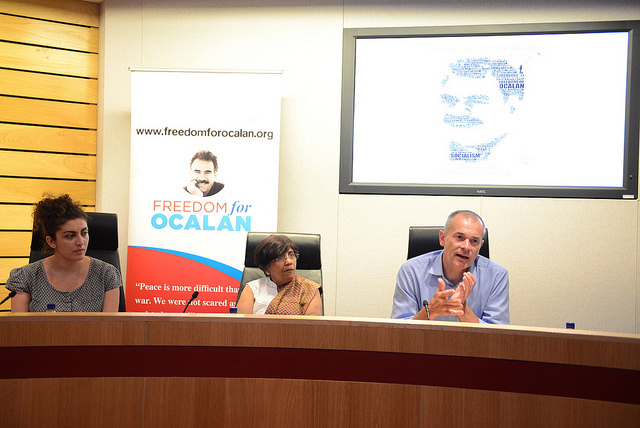 The event was kindly chaired by Simon Dubbins, International Director of UNITE.

The talk began with a short introduction by Simon Dubbins who reconfirmed his union’s support for democratic movements across the region.

Dilar Dirik then started by putting Ocalan’s thought, which can be read as both a political and philosophical text, she argued, in the wider context of the Kurdish movements struggle for radical change in the Middle East. Ms Dirik said that Ocalan’s work had thus changed with the Kurdish movement itself and was now being applied concretely in Rojava. She explained that, for Ocalan, the origins of oppression can be traced back to the very beginning of society’s development and the emergence of the first city states 5000 years ago. However, this history has always been balanced by the communities of the oppressed, be they women, the working class or indigenous people. Ms Dirik argued that, in Kurdistan, Ocalan saw the concentration of these problems, making his thought a manifesto for change that was universal to all peoples.

Following Ms Dirik, Dr Radha D’Souza emphasised Ocalan as one of the most important thinkers of our times, particularly of the so called third world. She said that Ocalan’s thought was complex and multifaceted, and that hers was only one interpretation as a South Asian woman. Dr D’Souza argued that this volume underpinned much of the rest of Ocalan’s work, answering questions about how a national liberation movement can be combined with anarchist ideals. She discussed the fact that, in many countries, after freeing themselves from imperialism, people find themselves facing the same oppression from their new state. She therefore argued that Ocalan’s ideas are vitally important in that, rather than focusing on capturing power, they seek to ferment resistance among the common people, regardless of who is in control.

The event was followed by a lively Q&A.