Bill Park : ‘The Crisis in Iraq' 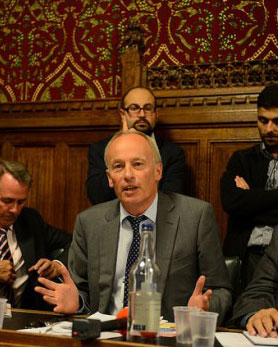 Senior Lecturer in the Department of Defence Studies, King’s College, Bill Park’s speech in the Public Forum ‘the Crisis in Iraq: Unexpected Alliances, Western Intervention and the Question of Kurdistan’.

“What I am going to say is, I hope analytical, but some of you might regard it primarily as pessimistic or realistic. I will leave you to judge. First of all, what is it that we are confronting? I think we need to be very careful when we think about ISIS and talk easily about military defeat. ISIS is a number of things, it is a set of ideas that reflect radicalisation especially of Sunni Islam in our world. Even if ISIS were to go away the radicalisation will not go away. And we need to bear in mind therefore we are fighting a set of ideas that is not rooted in any given institution.

ISIS also in Iraq reflects not just a handful of crazy people that primarily came in from outside, but is supported and sympathised by many ordinary Iraqi Sunnis. Ordinary in inverted commas perhaps, but tribal leaders, ex-Baathists, generals and so on and so forth. And, we need to be very careful when we fight ISIS in Iraq that we are not simply fighting the Sunnis that we fought when we fought Saddam Hussein and creating the same kind of negative reaction towards Western intervention. Also, ISIS is flexible, it is not like the Soviet division, it does not just sit in the desert and wait to be bombed. They can change their theatre of operations and they can change the way they fight. There is already indications that they are resorting to terrorism in Kirkuk, for example. So, it is not that they are not going to present nice and easy targets for bombing raids for US and other Western forces.

And I think we need to think about that and Baghdad. We have already heard some comments about Baghdad. I think forming a government is not the same thing as forming a government of national unity that creates a more inclusive Iraq. We have already heard that the Kurds have demands and that they are not going to settle for less than what they have got. They will want some of the issues that have not been addressed by Maliki for over many years addressed. And that could be a block for forming an inclusive government. You can get Sunni leaders into a Baghdad government, but many of those Sunni leaders are at war with each other, are compromised by corruption and are not necessarily representative of many of the Sunni Arabs in the country.

Many of the Sunni Arabs in the country are better represented by the people I have mentioned, the fighters on the ground, the ex-Baathists and so on and so forth. Even if you form a government of national unity, which I am pessimistic about, it will not be easy to create functioning government in Iraq. Maliki corrupted the institutions, he ignored the constitution, corrupted the rule of law, created a nepotistic personalised form of government that most especially affected the security forces and all of that will not be put back together again very easily. So, we are not necessarily going to have a very effective Baghdad government and government institutions for some period of time even if we create a government of national unity.

As for the Kurds, they over a long period of time in Iraq have been denied arms as we have heard from the panel. The whole of this year, they have been denied money. And, they were really denied much in a way of political support. Obviously, Maliki has tried to make things difficult as he has been able to for the Kurds, but I would say that Washington has not tried very hard to make things very easy for them. As we have heard the Kurds need to fight ISIS because of the border, because of the threat to Kurdistan, but they have to fight in their own interest. Sometimes, I think I am picking up the idea that the West or the Americans think that we can fight ISIS to the last Kurd and give nothing back. We have to bear in mind that Kurds have demands in Iraq and they will have to be met and they will not fight other people’s fight unless some of their demands are met, so they are going to want something.

And then the West, it seems to me and this is primarily the United States, was too indulgent towards Maliki for far too long, was too neglectful of Iraq’s Kurds for far too long and not sufficiently supportive, and also has ignored the struggle that has been going on between the Kurds and ISIS for too long. So, in addition to thinking about how we fight ISIS, I think we need to think about getting better politics because I think the politics of the West, and this is primarily the United States, has been neglectful and has presided over some of the problems or enabled, I should say, some of the problems that have now emerged.

This is going to mean not only a coalition between Western countries. We are going to have to rethink the relationship between Syrian Kurds, PKK, PYD, whatever you want to call them. Obviously, the Iraqi Kurds and their relationship with Baghdad and also the relationships, I have to say this, with Assad. There is no way that you can to fight what is probably now Asad’s most effective adversary without actually having to rethink your relationship with Assad. And, also building understandings in the region is necessary, because another reason why ISIS has got to where it has got is because countries or elements of countries and governments in the region have been somewhere between turning a blind eye to the emergence of ISIS and supporting it. And, that also has to stop if there is going to be any real progress in defeating ISIS, whatever it is we think ISIS is.”