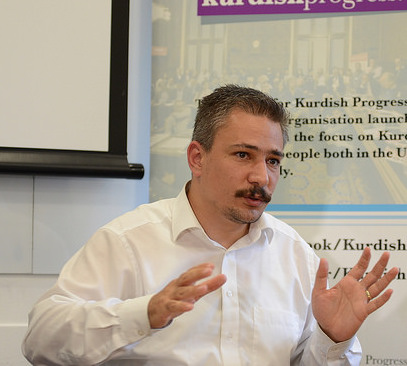 Alp Altinors is Member of the Central Executive Committee and Vice President of the Peoples’ Democratic Party (HDP). Mr Alp Altınors was a MP candidate for the HDP representing the city of Samsun on the elections of 7th June, 2015.
As a participant of the Taksim-Gezi Resistance of 2013, he was wounded and imprisoned. He represents the Socialist Movement and is a determined advocate of the Kurdish People and their movement. Mr Altınörs founded the 'Nazım Hikmet' Marxist Academy of Sciences  in Istanbul in 2008 where he also gave lectures on Political Economy. He worked as editor of the 'Atilim' newspaper between 2002 and 2007 and is still a columnist in the newspaper alongside writing for the pro-Kurdish Özgür Gündem too. Mr Altınörs is also an English and Spanish translator.