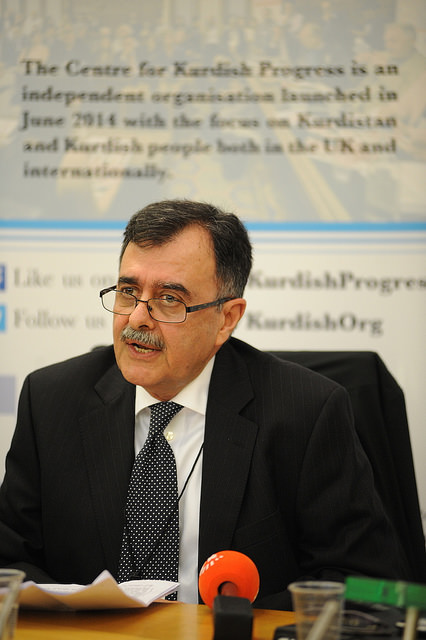 Abdullah Mohtadi, leader of the Komala Party of Iranian Kurdistan, a major political force for about four decades, was born in 1949 in Iranian Kurdistan. His father was a minister in the short-lived Kurdish Republic of Mahabad in 1946. He received his BA in business administration in Teheran. With some of his fellow Kurdish students, he co-founded the Komala organization in 1969 as an independent leftist party. Komala proved to be a coherent and resilient organization with a broad network of political activists which survived the Shah's persecutions and harsh treatment of the opposition in the seventies and later flourished as a non-traditionalist urban based political party all over Iranian Kurdistan. Mohtadi himself was arrested three times under the Shah (and later once under Khomeini) and has spent over three years in jail as a political prisoner. When eventually Ayatollah Khomeini ordered a massive onslaught against Iranian Kurds in August 1979, Abdullah Mohtadi emerged as one of the leaders of the Kurdish resistance movement. Some months later, when the Islamic Regime of Iran, under pressure by the Kurdish resistance, decided to negotiate with the Kurds, Mohtadi was appointed head of Komala team in the United Kurdish Delegation and actively took part in the negotiations. Mohtadi stands for a democratic, pluralist and non-centralist Iran that lives in peace with its diverse cultural, linguistic, religious and ethnic population, its neighbours and the world.

A well-known figure among Iranian opposition, Abdullah Mohtadi in currently the leader of the Komala Party of Iranian Kurdistan.