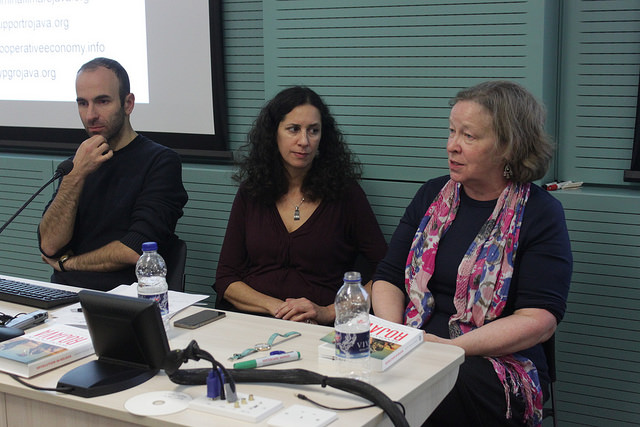 The Centre for Kurdish Progress in partnership with Pluto Press and the Centre for Gender Studies at SOAS organised a book launch and discussion with the co-author Ercan Ayboga and the translator, Janet Biehl, of the important, groundbreaking new book 'Revolution in Rojava: Democratic Autonomy and Women's Liberation in Syrian Kurdistan', published by Pluto Press.

The event was chaired by Professor Nadje Al-Ali of the Centre for Gender Studies at SOAS.

Professor Nadje Al-Ali began the event by discussing the arrest of Pro-Kurdish Peoples' Party (HDP) co-leaders Selahattin Demirtas Figen Yuksekdag and a number of HDP MPs along with two co-mayors of Diyarbakir, Turkey. She added that she was disappointed by the British Government's silence on the issue, and that other European governments were considering re-calling ambassadors on the issue.

Janet Biehl opened her speech discussing how the book was supportive of the idea of a stateless society, the story of which began with the Sykes-Picot Agreement in the early twentieth century which saw the creation of artificial states in which the Kurds were divided by Britain and France. She argued that in facing assimilation projects from Arab and Turkish governments, that Kurds ultimately came to be against the idea of the state. She then commented on the conflict between the Turkish State and Kurdistan Workers' Party (PKK) insurgency, which began in the 1980s and continues at present. She then elaborated on the notion of decentralisation and libertarianism from an American left wing perspective, and how this ultimately influenced the present goal of Kurdish movements of democratic confederalism, which seeks to establish society-led autonomous governmental units such as the Rojava canton in Syria without a state. She added that among the key principle of these are ethnic and religious co-existence, ecology and the liberation of women. She also argued that both gender oppression and inter-communal tension was often re-enforced by the state which would develop institutions and require one dominant ethno-religious identity. She continued to add that society-led academies which are decentralised and non-statist are also providing education in Rojava. She argued that people's and women's protection units which also replace the necessity for a standing military.

Ercan Ayboga began by discussing the role of Kurdish groups from Rojava from the 1980s in armed conflicts both in Iraq and Turkey's Kurdish regions. He added that many families are split by borders in this region. He stated that after the year 2011, the Rojava Kurds who are the poorest Kurds in the Middle East created a revolution at a time when no one expected. He explained that the revolution came because the Kurdish population in this area were capable of organising themselves effectively, which led to the creation of the organisations such as the Kurdish National Council in Syria. He added that these movements do no want a nation-state but instead a democratic society to govern it, with greater direct involvement of the society at large. He explained that these groups in Rojava refer to the 19.07.2012 as where start of this revolution, and from then on, communes of around 30-400 households and neighbourhood councils began to take responsibility for administration along with a district people's council and at the top level the "People's Council of West Kurdistan" (MGRK).

The speeches were followed by some concluding thoughts from the chair, a question and answer session and a discussion.

Ercan Ayboga is an environmental engineer and activist. Formerly living and co-founding the Tatort Kurdistan Campaign in Germany, now he lives in North Kurdistan and is politically involved in the Mesopotamian Ecology Movement, particularly in water struggles.

Janel Biehl is a writer, editor and translator. She was Murray Bookchin's copyeditor for the last two decades of Bookchin's professional life. Her most recent work is 'Ecology or Catastrophe: The Life of Murray Bookchin' (2015, Oxford University Press)