Public Forum with a Parliamentary Delegation from the Kurdistan Region 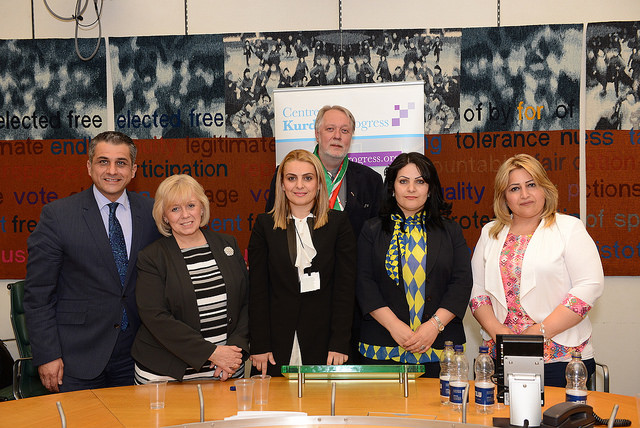 Th event was hosted by Mary Glindon MP and chaired by Gary Kent of the All Party Parliamentary Group for Kurdistan (APPGK) and Karwan Jamal Tahir, High Representative of the Kurdistan Regional Government (KRG).

Mary Glindon opened with a brief discussion of her efforts to along with other APPGK members to ensure the provision of equipment needed for KRG forces to use against the forces of the so called Islamic State (IS).

Karwan Jamal Tahir, High Representative of the Kurdistan Regional Government made a brief statement offering thanks to the Centre for Kurdish Progress and the APPG, and discussed the roles of the evenings speakers in helping and rescuing women who have suffered at the hands of IS. He also expressed his regrets that Miss Evar Ibrahim was unable to attend the event.

Gary Kent noted that around 30% of the House of Commons was female and that the KRG parliament was about the same.

Miss Vian Abbas opened by expressing thanks for the Centre for Kurdish Progress' efforts to raise awareness about Kurdish issues in Britain. She also added her thanks to Britain for its contribution to the fight against  IS.

She focussed chiefly on the issue of Kurdish Yazidi women who have escaped from IS as well as those who remain in captivity. Since 3 August 2014 Sinjar and the surrounding area had been under the control of IS, although these areas were liberated, the population had suffered greatly. IS forces had abducted women and girls and sold them into sexual slavery. She expressed sorrow that such things have occurred in the 21st Century.

She stated that one of the main problems that the KRG is facing with regards to the young women who remain in captivity is that they are being held by an organisation with which it is very difficult to negotiate. In certain instances, women's freedom has been bought by the KRG Prime Minister's office who has been able to make deals through local tribal leaders in the affected areas. She noted that others had been able to escape during allied airstrikes on IS. Miss Abbas stated that the women who have been rescued or have escaped are deeply traumatised and continue to suffer mentally due to their experiences of violence, rape and the murder of loved ones.

She gave several figures, including that the number of Yazidis in Iraq is 550,000, 360,000 Yazidis of which are internally displaced, 2745 children have been orphaned or lost a parent, 44 Yazidi religious shrines have been destroyed by IS and 6386 people were abducted by this organisation, more than 3000 were women.

Miss Abbas stated that one of the reasons she came to London was try and gain support in order to improve the capabilities of psychological care for female IS victims who have reached safety.  She also expressed thanks to the British Parliament for having recognised the crimes committed by IS against Yazidis in Iraq as genocide. She added that long term efforts are required to help these victims as projects so far have generally been short term.

Miss Hayat Majeed Parkhi discussed the role of the KRG's 7 member Women's Rights committee (of which two members are male), and its efforts to put pressure on the KRG parliament to ensure the allocation of funds equalling around $100,000 to those afflicted by IS especially women and children. She added that the committee also lobbied the international community to help these victims and was able to send 7000 people to Germany to receive treatment. Miss Parkhi also explained that the committee was able to reach an agreement with federal authorities in Baghdad to give a regular stipend to women who have lost husbands and male relatives to ensure that they do not go destitute; this stipend however has yet to be paid by the central government.

Miss Parkhi added that there was a private meeting in the KRG parliament to discuss how to assist IS victims and that the resulting resolutions were implemented. She added that the KRG committee has also engaged in efforts to provide opportunities for traumatised Yazidi women to have jobs, for instance through the creation of small businesses, that would not only help them to earn a livelihood, but also help to reintegrate them within mainstream society. Miss Parkhi added that Yazidi spiritual leaders have declared that the women who have been sexually abused by IS are to be granted a special status as holy members of the religious community who are deserving of veneration; these women have also been offered marriage as a means of reengagement with the wider society. She also stated that these women have shown great bravery and service to Kurdish society in their determination. Miss Parkhi also noted that the role and number women within the KRG parliament has increased greatly.

She supported this statement with the following figures:

She added that from 2013, while there have been fewer female MPs than the previous year, these women were very active in the politics of the region. However, she mentioned still that only around 3.19% of top government roles are occupied by women.

The discussion was followed by a question and answer session.