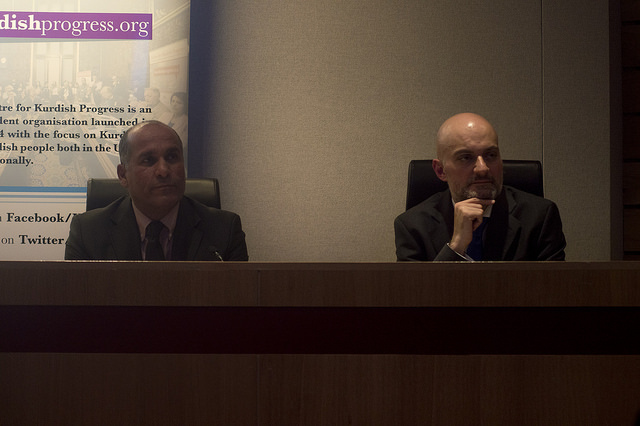 Photos of the event

Dr M. Rodwan Abouharb opened the event discussing the right to self-determination of national minorities as determined by Woodrow Wilson in the early 20th Century and how this legitimised Kurdish claims for this right. Arguing that this should be negotiated through peaceful means and with the usual attributes of respect for human rights and good government, he added that outcomes can vary between protected statuses, autonomy, federal solutions and full-fledged independences.

Cllr Mohammed Bakhtiar opened his speech discussing the controversial nature of speaking about the Kurdistan Regional Government (KRG) President Masoud Barzani and his career. He argued that 1991 was a land mark for Kurds in Northern Iraq as they were able to govern themselves. He stated that he chose to talk about Masoud Barzani rather than the Kurdish Democratic Party (KDP) that President Barzani leads. He argued that Barzani inherited his father's role as a leader after the crisis of September 1974. He discussed the Iran-Iraq war that ended in 1988 and he devastating impact that this had on Iraq and Barzani. In addition, he mentioned Saddam Hussein's violent campaign that specifically targeted the Barzani family, which had been leading resistance against the Iraqi regime. Cllr Bakhtiar added that Barzani had been at the front line on numerous occasions against the Iraqi regime with the Peshmerga forces.

Cllr Bakhtiar continued, stating that Barzani was able to prevent Iranian and Turkish influence from becoming to strong over the KRG in the time since 1994. He also argued that the Barzani-led KDP government had been the most successful in providing a good environment for trade, business and public services even in the difficult times, even in spite of the efforts of former Iraqi leader Nuri al-Maliki, whom Barzani ultimately pressured to step down in favour of Haydar al-Abadi. Cllr Bakhtiar also argued that President Barzani was also very capable in establishing a strong relationship with Saudi Arabia since 2008 and in his recent negotiations in Baghdad with the Iraqi leadership.

He concluded calling for Kurdish unity to build an independent KRG under the leadership of Masoud Barzani, who would be able to make alliances, but also work with Iraq, Iran and Turkey.

The speech was followed by a question and answer session.