DEMOCRATIC CONFEDERALISM: THE ALTERNATIVE TO TYRANNY AND CHAOS IN THE MIDDLE EAST 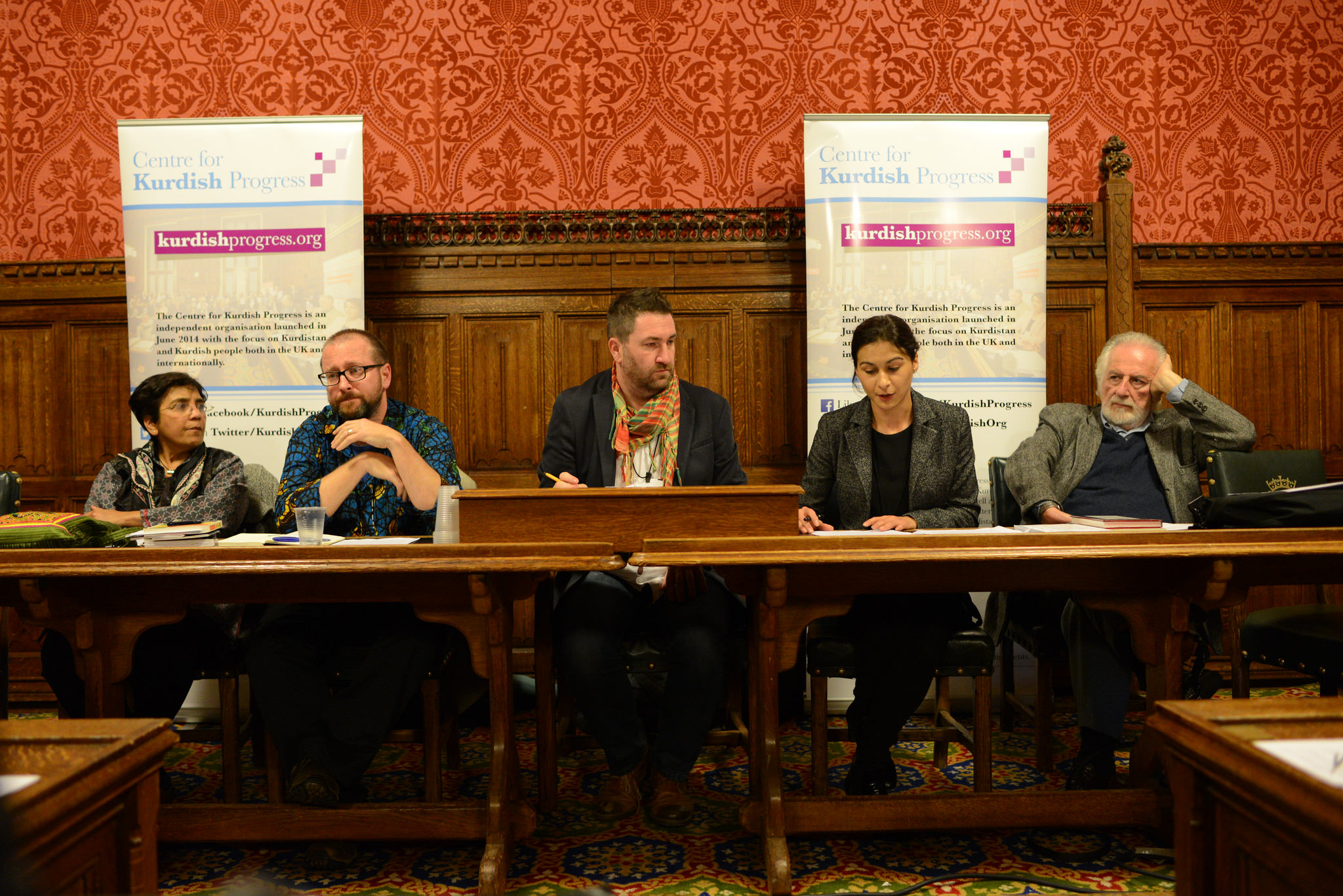 On 23 October 2017, the Centre for Kurdish Progress put on a joint forum in parliament with the Peace in Kurdistan campaign group on ‘Democratic Confederalism’, the alternative political model of jailed Kurdistan Workers Party (PKK) leader Abdullah Ocalan. The event was kindly hosted by Kate Osamor MP, who sent her apologies for not being able to attend, and chaired by journalist Steve Sweeney. It featured panel speakers Dr Radha D’Souza, Dr Zeynep Kurban, Dr Thomas Jeffrey Miley and Dimitri Roussopoulos.

Chair Steve Sweeney opened up the event, introducing the speakers and outlining his experiences reporting from Cizre during the bloody 2015-16 operation by the Turkish security services. Dr Radha D’Souza, reader in law and activist, began the discussion by drawing parallels between the anti-colonial struggles in India in the first half of the twentieth century and the Kurdish movement, especially regarding issues of pluralism, and that a similar language concerning rights and freedoms has returned. She spoke about how democracy is “not fixed” and is constantly evolving – that John Locke’s conception of a democracy in the 17th century (one that excluded “vagabonds”) was replaced by new ideas about democracy right through to the democratic anti-colonial movements of the 20th century, the campaigns for civil rights, women’s equality and so on. Dr D’Souza commented on how the state itself needs to be questioned as it has failed not only the Kurds but also the Balochis, Kashmiris and others, and that the democratic confederal model recognises these concerns and provides a viable alternative.

Dr Thomas Jeffrey Miley, lecturer in political sociology at the University of Cambridge, began his portion of the session by calling the democratic confederalist project an “impressive articulation of a new kind of self-determination” – one that is both anti-capitalist and anti-state. He spoke about how the crisis of the liberal democratic model in the US (Trump), the UK (Brexit), Turkey (Erdogan), India (Modi/rising Hindu nationalism) and elsewhere has seen the resurgence of majoritarianism and the authoritarian state around the world, and that the failure of capitalist modernity combined with imposed borders and imperialism makes the world crisis most felt in the Middle East. He said that democratic confederalism is an alternative to this and that it should inspire resistance in the ‘capitalist core’ as well as the Middle East, where it provides a “roadmap” for peace and a genuine self-determination that extends beyond the traditional nation state. Dr Miley said that the Kurds faced the contradiction of being seen as “freedom fighters” in Syria and “terrorists” just across the border in NATO member Turkey. He spoke about the key tenets of the model, including citizen’s assemblies, female emancipation, social ecology, participation, direct democracy and self-defence. He closed by asking how can the model be spread beyond the Kurds to Arabs, to Turkey and elsewhere, and by saying that we should endeavour to put pressure on our Western governments to hold the Turkish state to account.

Dimitri Roussopoulos, chair of the Transnational Institute of Social Ecology, spoke of the “universal genius” of Abdullah Ocalan and that his knowledge and grasp of human history is both impressive and original. He said that democratic confederalism represented a “fundamental rupture” in the revolutionary tradition (i.e. with Marxism-Leninism). Mr Roussopoulos talked about his time with the Imrali peace delegations in Turkey in February 2016 and February of this year, and that he spoke with various trade unionists, feminists and other activists while he was there. He said that democratic confederalism was about the restructuring of social structures, and asked how we can apply these ideas to our own societies to achieve greater freedom.

Dr Zeynep Kurban, physicist at Imperial College London who has travelled to Rojava, began by reading a statement from Women’s Protection Unit (YPJ) commander and spokeswoman Nesrin Abdullah that spoke of the “crisis of humanity in both the east and the west”. Dr Kurban said that the post-WWII models are failing and that we are at a crossroads in the economy, society and politics. Leading the way in the fightback against this malaise in Kurdistan are women –“no other revolutionary movement has put women at the forefront of the revolution”. She spoke of her trip to Kobane in 2015 and how she saw women being educated and, crucially, mobilised in the economy, in self-defence, and all other areas of society. She noted the involvement of Assyrian and Arab women in this movement too, and that these transformative currents and ideas have the power to shape the Middle East – and inspire the wider world. Dr Kurban read a quote from film-maker Mehmet Aksoy, the Londoner who was recently killed in Raqqa, and called for Kurdish groups to be included in the next round of talks in Geneva.

In the Q&A and discussion, we heard questions relating to the tensions between parliamentary and participatory democracy and between planning a successful socialist project while rejecting the state, as well as relating to the economic model in Rojava. Radha D’Souza posited that eastern thought can offer a lot in terms of alternative, decentralised economic models. Dimitri Roussopoulos spoke about participatory budgeting in parts of Poland. Zeynep Kurban spoke of agricultural success in Rojava, and both she and Thomas Jeffrey Miley talked about how it has withstood economic pressures at a time of war. Dr Miley drew parallels between democratic confederalism and earlier socialist thinking - for example, Rosa Luxemburg’s critique of Lenin’s conception of national liberation. He talked about how the Syrian Democratic Forces’ (SDF) alliance with the US is a double-edged sword in that it allows them to hold on to territory, but also undermines their anti-imperialist legitimacy among many Sunni Arabs.

Dr Radha D’Souza is a Reader in Law specializing in International Law & Development, Law in Third World societies and Resource Conflicts in the Third World. She is a social justice and civil liberties activist working in India, UK and internationally. She is the author of the preface to the book: Abdullah Ocalan: Manifesto for a Democratic Civilization, Volume II Capitalism – The Age of Unmasked Gods and Naked Kings.

Dr Zeynep Kurban is a physicist working on renewable energy technology development at Imperial College London. As a member of the Kurdish community in the UK, she has been an activist within the Kurdish freedom movement from a young age. Since the siege of Sinjar and Kobane in 2014, she has focussed on aid activities in the region through the charity re-build (http://re-build.help/about-us/), which she is a co-founding member of, and the Heyva Sor a Kurdistane (Kurdish Red Crescent). She has travelled to Rojava in 2015, soon after the liberation of Kobane.

Dr Thomas Jeffrey Miley is a Lecturer in Political Sociology, Department of Sociology, at the University of Cambridge. He received his B.A. from U.C.L.A. (1995) and his PhD. from Yale University (2004). He has lectured at Yale University, Wesleyan University, and Saint Louis University (Madrid); and he has been a Garcia-Pelayo Research Fellow at the Center for Political and Constitutional Studies in Madrid. His research interests include comparative nationalisms and empirical democratic theory.  His current project is on comparative struggles for self-determination in the 21st century.  He has published widely on dynamics of nationalist conflict and accommodation in Spain and, increasingly, in Turkey.

Dimitri Roussopoulos is the chair of the Transnational Institute of Social Ecology, and the president of the urban think tank, Institute of Policy Alternatives Montreal. He has authored over a dozen books on subjects ranging from participatory  democracy, social ecology and international politics and, as a publisher with Black Rose Books he has published almost 500 books. He is a political and community organiser in fields like housing rights, the cooperative economy, and ecological issues. He was a collaborator and friend with Murray Bookchin, the pioneer of social ecology which has so inspired Abdullah Oçalan and the Kurdish movement. In February 2016 and February 2017 he participated in the international Imrali peace delegations organised by the EU Turkey Civic Commission.

Steve Sweeney is a journalist and campaigner with an interest in Turkish and Kurdish politics and culture. He has travelled extensively in Kurdistan observing trials and covering Turkey's recent constitutional referendum. He was arrested while travelling through Cizre where he met with families who had lost relatives in the basement fires, where 189 men, women and children were burnt alive by Turkish security forces. Steve has spoken in the European Parliament on Press Freedom and Democracy in Turkey.  He is a patron of Peace in Kurdistan and a committee member of the Freedom for Ocalan campaign.